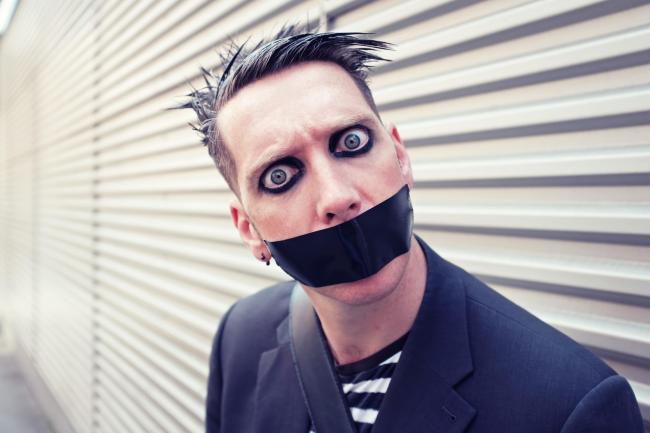 Sam Wills, a.k.a Tape Face, is an experienced stand-up comedian who is currently travelling the UK on his tour. The tour consists of 50 shows and he is making a stop in Bangor at Pontio on the 3rd November. You may recognise him from America’s Got Talent where he went all the way to the live shows, John Bishop’s show on BBC 1 and The Royal Variety Performance on ITV. He kindly took the time out of his busy schedule to talk to us.

Have you always wanted to perform?
I was given a magic set at the age of twelve and since then been hooked. You know every kid gets that kick and performs for their parents over and over again and then just naturally I gravitated towards performing for people.

How did you get started?
I hunted down the clown in my town and forced my way into his show. I then went on to study at circus school and started street performing. There was a time where it was hard to get gigs so you would just start busking.

Is busking how you started off?
I guess it is. I started way back in New Zealand in 1999, early 2000’s and from there got into stand-up comedy through a friend. A comedy act cancelled last minute and I was asked to fill in for them, so I went down with some props and from then on became New Zealand’s only prop comedian.

You started your career off in New Zealand, what made you make the move over the pond?
I actually wanted to go to the Edinburgh Fringe Festival. From New Zealand I went to Australia to fine tune my act and get a bit more of a reputation, then travelled over to the UK to perform at the Edinburgh Fringe Festival. There is also more work opportunities over here. Don’t get me wrong I miss New Zealand like crazy but I had reached my peak there. I had done all the work all the shows and wanted to broaden my horizons.

You are most known for Tape Face so how did this character come about?
[Laughs] well it actually came about as a joke. I started off with my first act where I talked a lot and it was a very rapid show. So in 2005 I won a top comedy award in New Zealand for that show, so when I won everyone expected the next show to be the same with me talking a lot, so I decided to surprise everyone and do a silent character. So I taped my mouth shut and the character took off.

So you’ve performed in front of a lot of people and a lot of places, do you ever still get nervous?
Oh yeah I still get nervous, I mean I don’t get nervous in front of people cause I think of everyone as the same, like I don’t really look up to famous people as I have more respect for the guy that works 15 hour shift in a building site, you know? But for TV I always get nervous as it’s recorded so is permanent, say if something goes wrong and it’s uploaded to YouTube it’s there forever, which is frustrating for me as I am a perfectionist.

You are halfway through your tour now, how is it going so far?
Ahhh it’s incredible! Last night’s show was one of the top 5 shows I’ve done in my life. It’s a 2 hour show so the longest I’ve done before and it’s a lot more theatrical. It’s been a challenge but a reward for me. I’m loving it!

What can people expect from your shows?
I think people know what to expect from my shows now, so audience interaction but in the nicest possible way. Expect this show to have a bigger production factor than before. Usually it’s just me on stage but this time it’s like a proper almost west end show.

What was the experience of being on America’s Got Talent like?
It was completely terrifying [laughs]. With something like that it was completely out of my control. I am normally so sceptical of other people judging you for your comedy but I just remember standing in the wings as a Whitney Houston tribute act was getting buzzed off and thinking this is the worst mistake of my life. But at the same time it was a chance for the dreaded word: exposure. But for me I was so lucky because it did give me great exposure. I never guessed how big it would become. I knew people would like the act from experience but now I think we are up to 40 million views on my audition. It’s just crazy!

What’s the weirdest thing that’s happened when you’ve been performing?
Oh things always go wrong but in a good way that’s why I love the audience participation. I had this one guy in Glasgow which I dressed up as a stripper for part of the routine and he started taking the clothes off and then he just carried on and took off his own clothes. I’ve even had a couple of proposals on stage which is pretty amazing as everyone can share in the experience.

What’s your biggest career highlight?
I think performing at the Royal Albert Hall in London, that was amazing but having the opportunity to travel is the best part.

Have you ever been to North Wales before?
I have! I believe I did a tour here a couple of years ago but the Bangor date is one of the few I am doing in Wales. As long as you have good coffee I will feel right at home [laughs]

Final question for you, what advice would you give someone who wants to take up a career in performing or comedy?
Keep going! No matter what keep writing keep writing, keep performing. There’s going to be a lot of knock backs but it will work out eventually. Keep going and stay with it! If it’s what you love it should work out.

Digital Sex and Unwanted Celibacy: How Sex Was Reimagined During the Pandemic