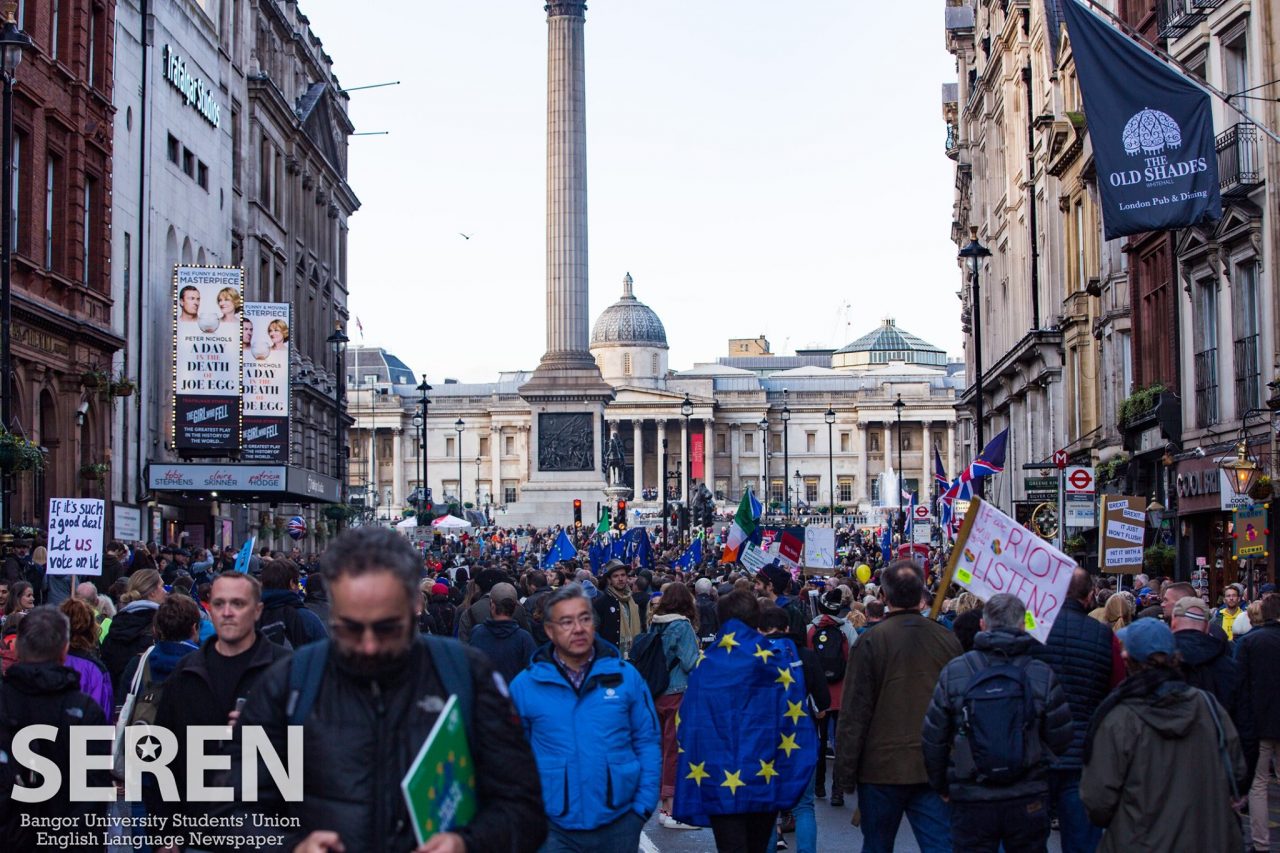 It is a troubling time for university students in the UK. What is your advice for dealing with the stress and confusion caused by Brexit uncertainty?

What we did, for example, until now, is try to remind the students to keep informed. It is difficult to not get tangled in the whole thing. What we do in our office is work with what we’ve got, and don’t get too tangled into it. Now, it’s very easy to say, but obviously, we’re all in the same boat. I had to apply for the settlement scheme myself. What we did is we signed up to do a pilot before it was open to the whole country and I tested my case, just to see what it’s going to be like. At the moment, what we’re focusing on is the EU settlement scheme, because we know that 100%, whatever happens, this is what the students will have to do. Whether they want to or not, we can give advice on what the advantages and disadvantages are. What we are suggesting, in terms of how difficult it may seem or how nerve wracking the whole situation can be, is to get a bit of control. We know what is definitely happening, so we are asking students to actually do this to feel better.

What would be happening to the Erasmus + Scheme?

We don’t know. It will entirely depend on whether there is a deal or no deal. Unfortunately, there is not much we can say about that, because there are still talks about what’s going to happen. So far, for this year, everything is continuing as it is, but we don’t know if by the end of October there’s going to be a ‘No Deal’; we are not 100% sure what’s going to happen with the January intake, because they will need to discuss whether there’s funding available, etc.

For the students who are here already, nothing will change for them. Those who were given funding for the first semester, and then applied for the whole year- everything stays the same for everybody, Erasmus or non-Erasmus.

The changes will be after that, and I think it will be based on relationships with the country and whether there are different agreements between different countries.

What is your advice for students who haven’t applied yet and are unsure how to?

Our message is very clear, and it is: apply. If you have been here for more than 6 months, you can apply for the EU Settlement Scheme, and that will give you the privilege to stay here with the same conditions that you’ve got now for 5 years. So, if you’ve been here for 3 years, and you’re finishing your third year, we are suggesting that you especially apply, because that will give you 2 years where you can decide if you want to stay in the UK, and you can apply to the Settlement Scheme for settled status and receive indefinite leave to remain.

If you don’t do it and leave, and say in a year everything changes, you might be in a situation where you need a visa to come back and work.

So, now that they can do it, we’re suggesting that everybody does it. If they decide to leave after their course and never come back, it doesn’t change their nationality or anything. It’s very positive, and free.

Home Office minister Brandon Lewis says EU citizens will deported if they do not apply in time. How would the University deal in the event of a deportation of Bangor EU student?

I think that’s an over-exaggeration. What the Home Office has said, and all the official channels have said to all the Universities and everybody, is that no-one will be deported. What’s going to happen is that after whichever date; if there’s ‘No Deal’, end of 2020, if there’s a deal, it will probably be further away; EU citizens will have to do that. It will be a requirement, the same way you need a National Insurance Number to work, you will have to have applied for the EU Settlement Scheme. It will be a condition.

Does this mean that if you don’t want to apply, you will be kicked out? No. That doesn’t mean that. There will be no deportations, and that’s very clear. What’s going to happen, is that for example, if you haven’t applied, and there’s ‘No Deal’, and by 2021 you haven’t applied, you could be facing a situation where you would go to find a job, and they’ll say ‘Well, you haven’t got the right documents; I’m sorry but you cannot get this job.’ So eventually, you will have to do it. That’s why we are insisting that all students please do it; it’s very positive, and there’s no negative really.

How would Brexit impact international students?

What we’ve seen not only in the EU but worldwide is that the concept of the UK as a country has slightly changed based on the feedback we’ve had in the past from students. They had expressed that maybe the UK doesn’t seem as welcoming as they thought it would be. So that’s kind of the message that has been launched after all this, whether this is true or not that goes to everybody. The message that other countries have also received is that it might not be as welcoming as they thought.

On the other side, we have seen students who have actually celebrated that it is happening, because they think they will have more equal opportunities when they go and look for jobs, for example. At the moment, international students might have a lower possibility of getting jobs when competing with EU citizens, because of visas. It could also be that in a few years there’s a situation where overseas and EU citizens will all have to compete.

What about UK students?

The way it might impact them is if they want to have exchange programs abroad. If eventually, Brexit resolves in having less international students, that also impacts UK students, because having a university as diverse and plural as Bangor is such an asset- it is beneficial for UK students to have people from all over the world in the same class.

What are some of the most useful sources students can consult in this situation?

They can have a look at the gov.uk website, but it tends to be quite heavy and difficult to follow. What we do at International Student Support is we are always open to answer questions. Students are more than welcome to come and see us, there’s no appointment needed, so they can show up and we will help them with general questions about what’s happening, what are the regulations, changes, etc, or with the application itself. We’re going to start now helping students with the EU Settlement Scheme applications. If anyone has any questions about what to apply for, what documents do they need, or if they need a mobile phone that works- one of the main issues was that the app that the Home Office has designed doesn’t work on all phones. For me, I had to try five different phones until I actually reached one that worked. If students cannot find a phone that works, they can come to our office and do it from here.

Is it necessary to have a phone to apply to the scheme?

It’s a lot easier. You can do it through your computer, but that will mean you will have to go to an appointment to see someone to go through the application. At the moment, you can do it through the app, where you scan your password, and with the camera you will take a picture of yourself, and it scans all the information that your password holds. Once I found the phone, it took me less than 10 minutes to do the whole application.

So imagine you’re a third year, and you apply now; you’ve got pre-settled status until you get to year five. So you get two extra years to stay here. After these five years, you then have to re-apply for ‘settled status’ which is indefinite.

Should students see the EU Settlement Scheme in a more positive light?

Definitely. I think, due to the nature of my job, I see it as very easy. But I also understand why someone who’s never really had to question their immigration status- even just the word ‘immigration’, and feeling a part of that ‘immigration’ office- it can make people feel uncomfortable. I don’t like the word ‘immigration’, I think it’s a bad word. Yes, it’s unfortunately something we need to do, but it’s nothing different from applying for your national insurance number. If you’re applying for your pre-settled status and get rejected, which hasn’t happened to date, then there’s many ways that we could help in challenging that decision. What we are trying to explain is that it’s not something that is life-threatening, it’s quite the opposite; it’s very beneficial for the students now. If they go through the process, they could potentially stay here in the UK forever without having to worry for visas. What we don’t know is what’s going to happen to people who are not in the UK, and after Brexit will want to come here. I think the worry should be set on people who maybe want to come here in two years to live and work. I’m from Barcelona, I’ve got family and friends who came to the UK to work for a summer – that might be more difficult.

For the ones who are here, this is a fantastic opportunity to potentially stay here forever without having to worry about it.

What happens if a student applies now and doesn’t receive a response by the deadline?

What’s the situation here in Bangor?

We had an EU Settlement Scheme session this week. We know more and more people are getting on board, and the questions that they were asking are similar to the questions you’re asking me; whether they would be deported; one of the important ones was ‘What happens if I need to leave the UK over Christmas? Will I be able to come back?’. Yes, 100%. And this is something very important to repeat: the Home Office has already revealed there will not be any passport or airport control changes at least until 2022.

We will have another of these sessions in the second semester, where we’ll go through everything I’ve explained.