Trending
You are at:Home»Features»The Cosplayers of Wales Comic Con

It’s been around for almost ten years, but Wales Comic Con is livelier than ever, as is the burgeoning cosplay community. What used to be a more niche interest is now enjoyed by a wide variety of ages, backgrounds and lifestyles, so we talked to just some of those people to learn more about the hobby’s appeals. 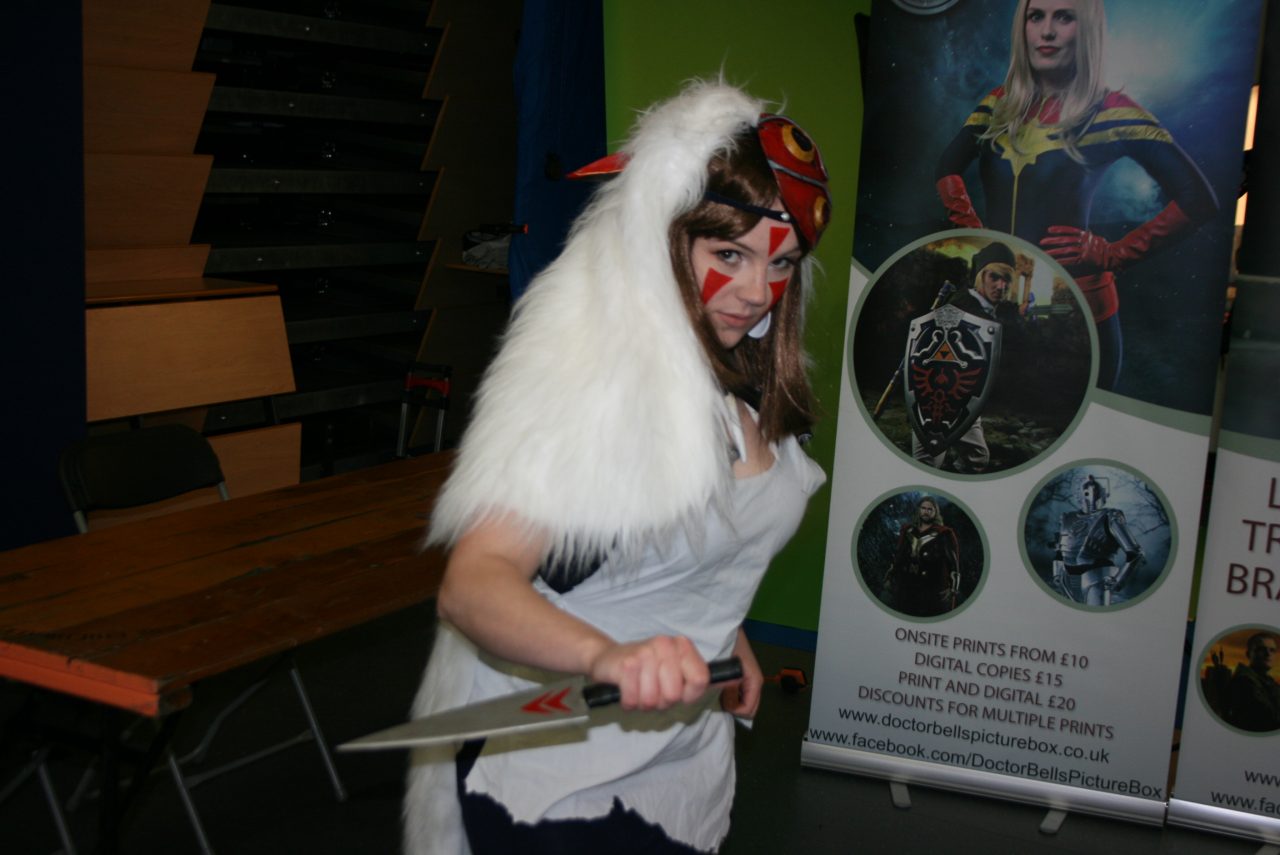 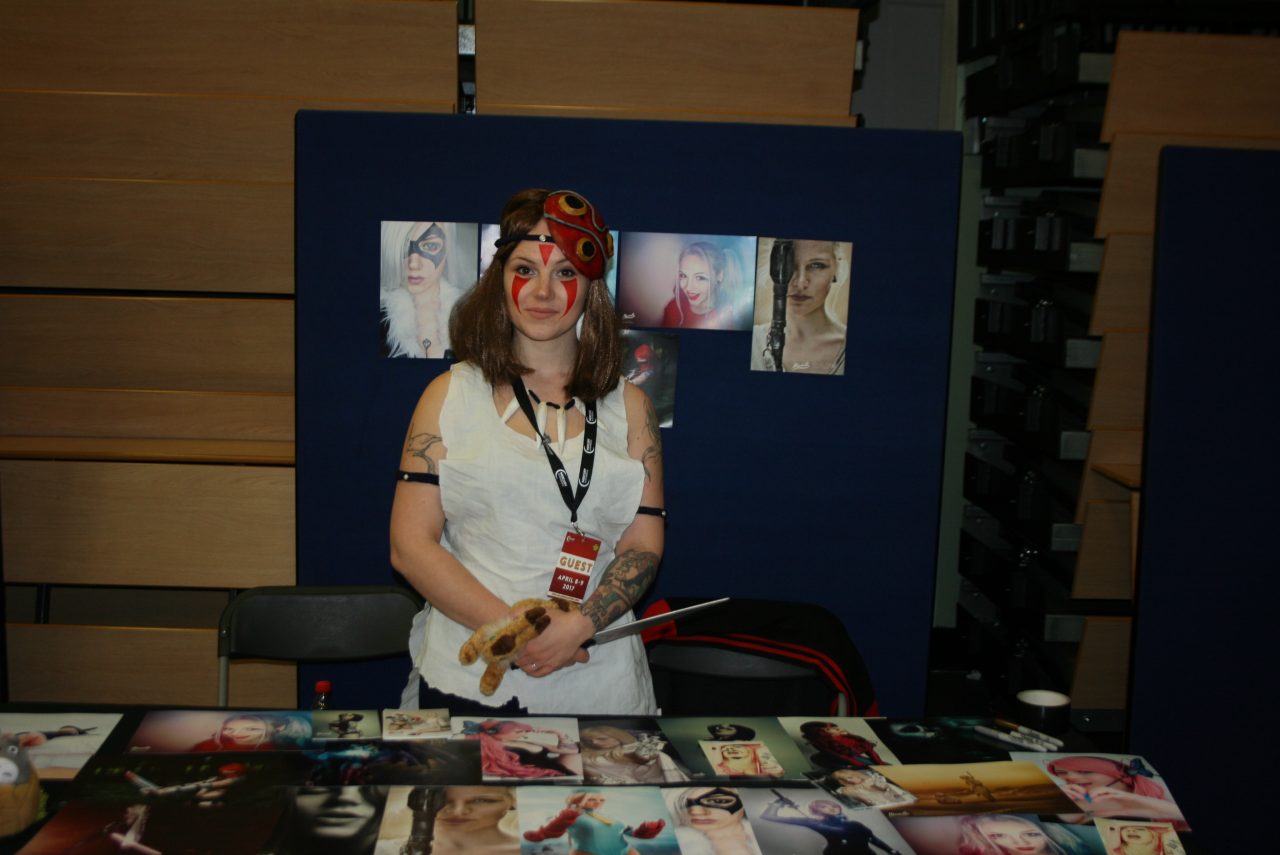 Masubi, as she prefers to be known, began cosplaying for fun ten years ago. She chose her name when she began modelling as a hobby, and even as her focus changed to photography her penchant for cosplaying stuck.

“I love making the costumes from scratch.” Masubi pauses, before adding, “Admittedly, even more than wearing them.”

Her booth is adorned with photo prints documenting her wide cosplaying history, many of which she personally captured and edited. They range from popular, easily recognisable characters like Rey from Star Wars Episode VII, to more obscure personal favourites such as Reika from the anime Gantz. Today, she’s somewhere in between, cosplaying San from Miyazaki’s Princess Mononoke.

Across ten years of attending over thirty UK conventions, Masubi has seen the growth of cosplaying and other subcultures once considered more niche. “I’m personally mixed on the change,” she admits, as she recounts a recent uncomfortable experience:

“I was Morrigan [from the Darkstalkers games], and a couple of drunken men came up to me and making comments and stepping side to side to purposely get in my way.”

“You could tell they weren’t regular con goers and had just stumbled in. You could see them making others uncomfortable too, wasn’t a fun experience. That’s the downside of public events I guess.”

Although her experiences online and offline are largely positive, Masubi is no stranger to sexist attitudes regarding her hobby, including shaming for wearing “sexy” outfits and scepticism over the legitimacy of her fandom.

“People don’t always believe you’re into these things because you’re a girl”, she says mournfully. She nods knowingly at the term “fake gamer girl”, a trope that asserts that women who seem to like ‘nerdy’ pastimes have ulterior motives. She recounts moments when people have tried to catch her off guard with trivia of the characters she dresses as.

“It’s so annoying, because most of the time I could directly quote from whatever it is. When it comes to names, though, sometimes I just forget in the moment.”

As Masubi reflects on her cosplay history, a family dressed as Pokemon characters approach; a young Ash and Misty seem to be filled with wonder, and the sight of them brings a cheeriness back to Masubi’s voice.

“Seeing kids react is another one of the perks of cosplaying,” Masubi says, “especially how they react when they think you’re really the character.” San gives Ash and Misty smile and a wave, and after a shy reciprocation, Team Rocket ushers them away. 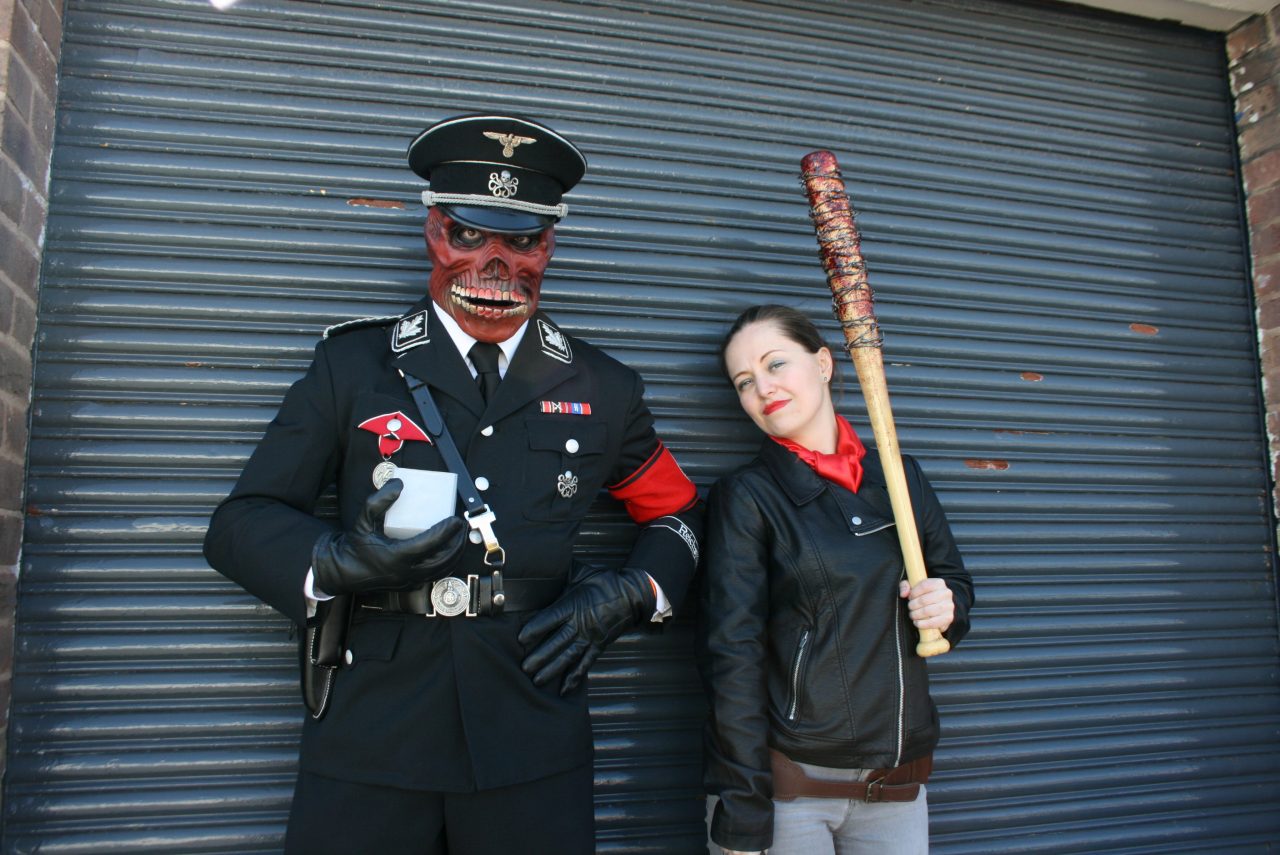 Andy Turner, 40, and Caitlin Messenger, 27, from Preston, cosplayed together for the first time two years ago.

“It started out as just a fancy dress thing”, says Caitlin, “but soon it was like we’d discovered a whole new world.

“It’s more than fancy dress. With Cosplay it’s about the interactions. You embody the characters, and act like they’d act.”

Caitlin is dressed in the leather jacket and red scarf of Negan from The Walking Dead. Her bloodied, barbed-wire baseball bat looks impressively–even uncomfortably– realistic. She hands it over for a closer look as Andy happily describes the materials he used to make it: the bat itself is [plaster? Foam?], and the surrounding barbed wire is in fact spray-painted leather.

Andy’s jackbooted Hydra attire and facemask depict Marvel villain Red Skull–the comic version rather than the movies, he’s keen to point out. He personally crafted both his and Caitlin’s attire.

“I try to make outfits that look better than the real thing”, Andy enthuses. He’s a former TV production student, but his creative skills go mostly into his hobby; in his day-to-day life, he delivers pharmaceuticals.

“We’re a two-person team team. Caitlin gets the materials, and I put them together. She’s got an eye for that stuff. A real penny-pincher.” At this, Caitlin shoots him a look that makes him noticeably flinch, even behind the mask.

“What?” Red Skull protests, as Negan stares him down. “It was a compliment!” 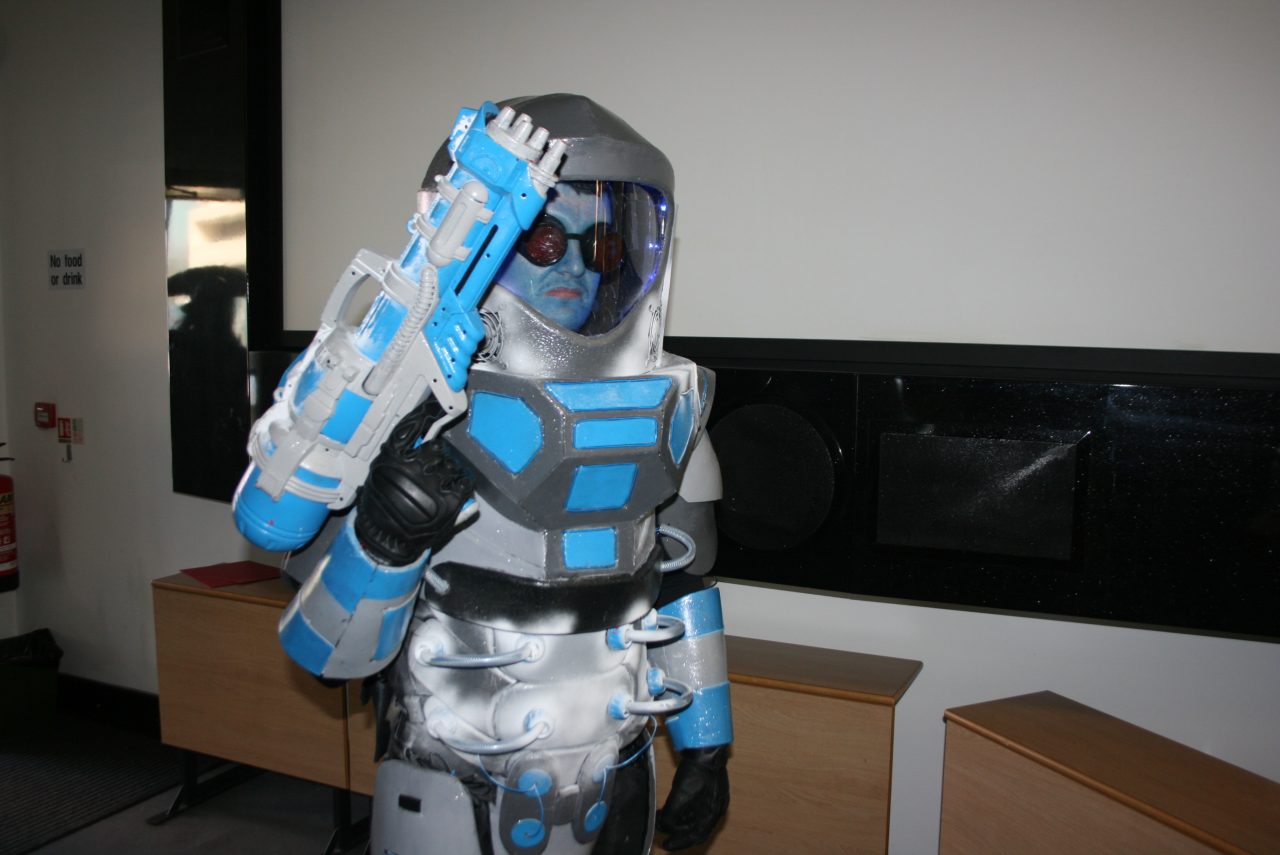 Kevin Bennett, 31, from Liverpool, has been cosplaying for five years. Illuminated with a blue glow, he’s embodying Batman villain Mr. Freeze, if just for the day. His bulky costume looks ill-suited for the uncharacteristically warm weather, but true to his fictional counterpart, his £100 homemade suit actually keeps him cool.

“I’ve yet to electrocute or injure myself,” Kevin quips, and provides a closer look at the inside of his helmet. Inside are working fans that seem to have been taken directly out of a computer’s motherboard.

“They’re USB fans,” he proudly explains. Unfortunately, his solution does little for his legs: “Yeah, not enough room to fit fans down there.” He grins sheepishly.

Kevin got his start in cosplay five years ago, when friends encouraged him to join a competition dressed as DC’s Deathstroke. “I was a bit reluctant, but I ended up actually winning,” he recounts. “It was one of the best experiences I’ve had.”

Today, Kevin’s Mr. Freeze is the latest of several DC Comics characters he’s been bringing to over 30 Comic Cons around the UK. Be it USB fans or water bottles, L-wire or Christmas lights, anything is fair game. But Kevin has no professional history in craft; in fact, during regular hours he works at McDonald’s.

“To me, cosplay is the ultimate wish fulfillment,” he says. “You get the chance to take a break from everyday life and be a superhero for a day.

The best part is the kids. Seeing their reactions gives you a buzz. I’ve had some come up to me and just start hugging my leg. The kids make the time investment worth it.” 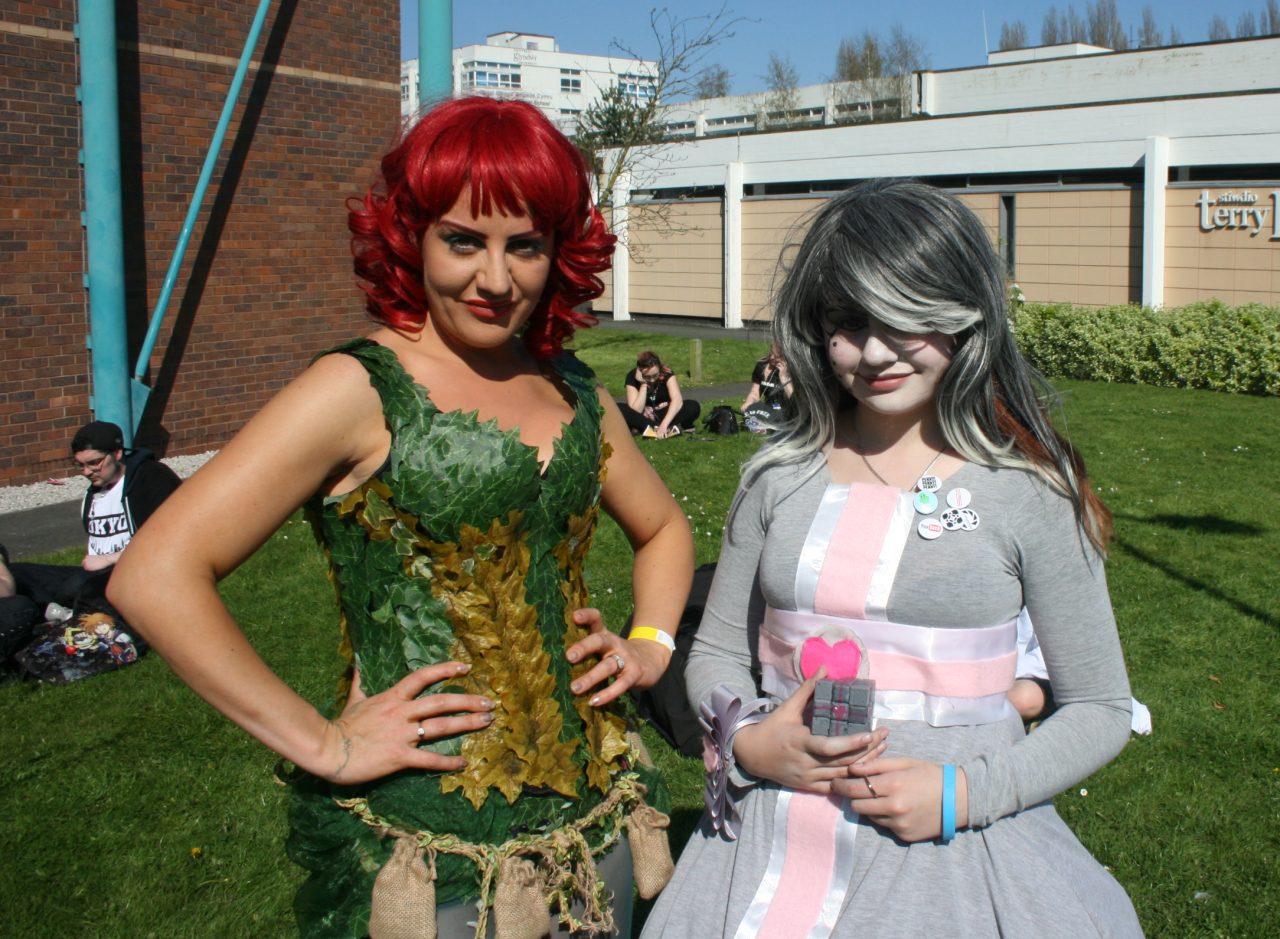 Sandra Owen, 33, and her daughter Alexis Ellis-Tait, 14, from Colwyn Bay, are cosplaying for the first time.

“What made us want to do it?” Sandra grins, and motions towards Alexis. “She’s the driving force!”

The pair are resting on the lawn outside the main convention hall, enjoying the sunny day. They’ve been to five conventions before, and have been drawn towards the cosplay community since they saw their first masquerade two years ago.

“It’s the best part of the convention”, Alexis says, “seeing all these people dressing up.”

Sandra nods. “Some of them look like they stepped right off a film set”, she adds with a tone of admiration.

Sandra, who currently studies environmental management at Bangor University, has a history in art and design. Her and Alexis spent 40 hours of their free time making their first cosplay outfits; Sandra as DC villain Poison Ivy, Alexis as the Weighted Companion Cube from Portal.

“I just got a corset and used that as a base”, Sandra explains, running her hands over her costume’s synthetic leaves. “This is just a start; I wanted to come as something more recognisable.”

Both Poison Ivy and Weighted Companion Cube agree that their first attempt at cosplay is a success: “you see the looks you get, and the recognition”, Alexis says, “It’s been the best part of Comic Con”.