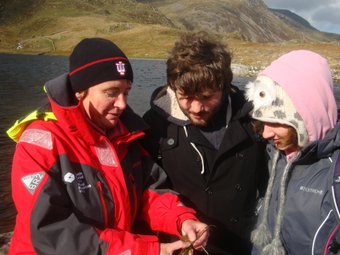 Dr Catherine Duigan currently works for Natural Resources Wales, which was formed in 2013 by the merging of the Environment Agency Wales, the Forestry Commission and the Countryside Council for Wales (CCW), where she was initially employed in 1992. A few days ago I met with Catherine in a moderately trendy café to discuss her journey from education to employment and whether she had any tips for recent graduates looking for a job within the environmental sector.

What’s your role at Natural Resources Wales and how has it changed since you began?

“My current role is leading a group of technical specialists, of about 30 people, who are organised into teams. I have subtidal, intertidal, marine vertebrate, coastal, freshwater, terrestrial habitats and species teams. So they’re mainly ecologists, but I’ve got some physical scientists covering areas like coastal processes too. We have three main roles: 1) To build up the strategic evidence base for Wales. We try to build up relevant data sets, like spatial data sets of habitat coverage or pollution. 2) To give advice to underpin policy, both within the organisation and the Welsh Government, (such as air quality, river pollution, and biodiversity loss). 3) Finally, we support lots of operations within the organisation in terms of environmental management, such as habitat restoration and species reintroduction.

I was all on my own with all the freshwaters and wetlands of Wales to explore.

My job is to manage and work with these specialists but the best thing about my job is that most days, no, I’d say almost every day, I learn something new just by interacting with people. That’s the fun bit of it for me, to be working with a great group of people who know Wales like the back of their hands.

I first started working in nature conservation in Wales in 1992 when I joined the then new Countryside Council for Wales (CCW), which was formed following the breakup of the Nature Conservancy Council. I was really lucky; CCW hired a whole bunch of ecologists in 1992 and I was one of them. I was their freshwater and peatland specialist – all on my own with all the freshwaters and wetlands of Wales to explore.” 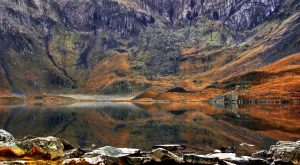 Was it quite a daunting and exciting task?

“It was fantastic! You could get in the car on a Monday morning and just go see those places. I had a really good boss who was very open to that and equally I realised it was essential because, for example, if you had someone phone you up from South Wales saying ‘I’m working on limestone lakes and I’m worried about pollution – can you give me some advice?’ It could be difficult to advise people without setting foot on site. That’s the fun bit and I did that for about ten years.”

How did you bridge the gap between education and finding employment?

“Well, it depends on what you call employment. I did my Ph.D. at University College Dublin, spent part of my time at Indiana University, and then I went to Scotland (because my husband got a job at the University of Aberdeen).

I wrote my thesis in Aberdeen and I had a part-time job at the University picking out invertebrates from benthic samples collected from the North Sea. That was a really boring job, to be honest, but then I discovered a job that came up just as I was finishing my Ph.D. involving mapping the aquatic macrophytes of lochs on the Isle of Skye, as part of the Freshwater Lochs Survey run by the Nature Conservancy Council for Scotland. So I had the most fantastic summer going to see freshwater lakes every day and recording the plants in them and taking some water samples. But that was only a temporary summer contract.

During that summer, I went to a paleolimnology (the study of sediment cores from lakes) conference at Windermere in the Lake District and met a lecturer from Aberystwyth University who was looking for a [paleolimnology]postdoc student. He offered me the place right there on the spot. I don’t know whether you call postdocs employment or not, though, it’s more of a transition. 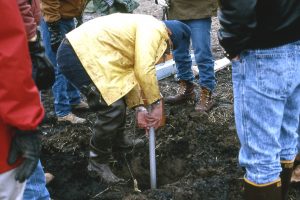 A key reason I got the job [at CCW]was because one of the questions I got asked in my interview was “what new scientific application would you bring to nature conservation in Wales?” And I answered paleolimnology because I had done a postdoc in paleolimnology and I also worked with one of the US experts in this field during my Ph.D. Since then we’ve done quite a lot of work, mainly with University College London, conducting lake surveys. We now have a database of over 100 lakes in Wales that we have built up, consisting of water chemistry data, aquatic macrophytes maps and analyses of short cores of sediment.”

So conferences are good places to search for jobs?

“Yes, conferences are absolutely essential for networking and finding out about opportunities. And also just to build up your confidence by talking to experts in the field.”

So it’s about having a good portfolio of experience?

“Yes, I appreciate it might be difficult to survive on internships. But if it’s a means you get valuable experience, do it.”

What kind of experience is preferred by ecological consultancy organisations?

“At the moment, nature conservation and environmental management in Wales are going through a transition. We still have nature conservation legislation that is focused on being able to identify plants and animals in particular. Organisations are under-resourced in terms of staff with these skills; we don’t think universities are producing many people that can identify things anymore. In some cases, we are putting time into trying to cultivate people that we recognise with the talent for taxonomy.

There really is a mission now to cultivate a broader picture and to sell the environment from a wider perspective.

But equally there’s a lot more of a shift now in government policy, and indeed, legislation in Wales, towards what they call The Ecosystem Approach. So looking at things like ecosystem structure and function, rather than looking exclusively at habitats and species. There really is a mission now to cultivate a broader picture and to value the environment from a wider perspective. Also, there’s a great scope for interdisciplinary research, like the links between biodiversity and ecosystem services, our human health and wellbeing. They would be good fields to be in.

Communication is a skill I look out for, people that are good at it will go far in this kind of world.

On a more practical basis, I would look for people with good analytical skills, project management (dealing with contractors and finance), and a talent for talking and writing; communication is really important. Because if you have a job similar to working with Natural Resources Wales in a day you could be out talking to farmers, have a phone call from a Welsh Government official, have to explain some science to a senior manager, or give a lecture at the local university. Different audiences require different approaches to communication. And it’s the same for writing; social media and blogging are all new and essential. Communication is a skill I look out for, people that are good at it will go far in this kind of world. So if you get offered an internship sampling lakes, for example, blog about it while you do it. It’s a great way for young people to get attention.

It appears to me that a mixture of practical and networking skills are essential, but it also seems that being in the right place at the right time and constantly looking for the next temporary job or internship to give you a step-up in your career are equally valuable.

What ultimately got you the job? Catherine summarises:

“I had a new perspective on the science and I had the practical skills in the field that they needed, the job I had with the Nature Conservancy Council in Scotland was important because that’s why the CCW called me for an interview. They told me ‘we saw you had experience with another nature conservation agency’.”