The Day I Borrowed Will Self’s Pen: Seren Meets Will Self. 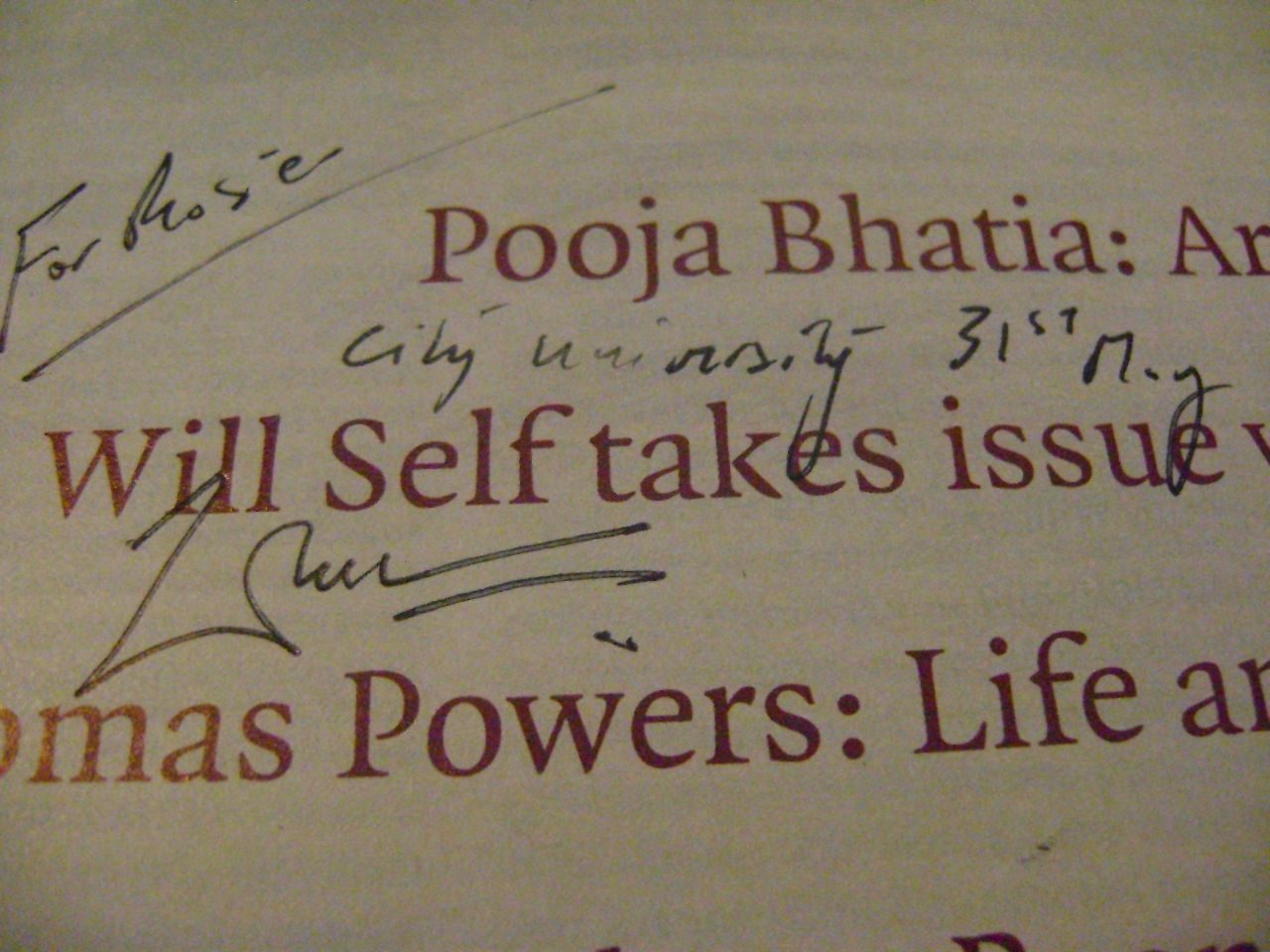 Will Self: Kafka’s biggest fan.

You may know Will Self as a Grumpy Old Man, a BBC panellist, a writer, journalist or as a critic. He is the author of nine novels including ‘The Book of Dave’, centred around an unwell taxi driver and seven short story collections, notably ‘Grey Area’.

Self is also quite possibly the biggest ever fan of Franz Kafka (1883-1924) and BBC Space is currently feeding his insatiable appetite for the Prague writer. The programme ‘Will Self’s Prague Journey’ is currently available on the BBC Space website, and it follows Self as he traces Kafka’s footsteps through his home city. The website also boasts a transcript of Will Self’s London lecture on Kafka. Seren’s Culture Editor was in attendance and discovered the more personable side to the Self – turns out he is not always a grumpy old man after all.

I was genuinely nervous about meeting Will Self, the famously deadpan, disinterested and irritable Grumpy Old Man, but when the email subject line flashed up “Invitation: Will Self’s lecture on Kafka”, I simply could not resist. My hand had automatically found its way to the ‘reserve tickets’ portal on the screen before I even knew it. It’s Will Self– a regular on Never Mind the Buzzcocks, Grumpy Old Men and other shows that are a boys’ night in masquerading as a television programme. He is also no stranger to BBC Question Time and Newsnight Review. His readers and viewers are genuinely interested in what he has to say, which asserts his regular place on so many panel shows. That he is so unafraid to speak his mind and won’t fight to be liked only improves his popularity.

Despite his appearance and reputation as a malcontent, if you catch Will Self discussing topics that please him, such as Franz Kafka, he is surprisingly perky and engaged. Sitting in the lecture theatre of City University and excitedly awaiting for his lecture to start, I noticed that the age demographic of his followers is wide-ranging; from undergraduate age to silver-haired readers.

Will Self, wearing a crumpled and creased jacket, opens his lecture on Franz Kafka by apologising for his attire. On the day of his lecture, he neglected a smart appearance because the roof of his house caved in that very morning and he has “spent the whole day on the ‘phone to insurance companies.” This is deliciously ironic given that Franz Kafka, the topic of Self’s lecture, worked for an insurance company! Will Self awards Franz Kafka the title of “King of the Grotesque”.  The lecture is filmed by the BBC for their ‘The Space’ website. Self appears completely immune to the cameras and wires occupying the space between his panel and his audience. The lecture tagline is ‘Kafka’s Wound’; Kafka was a sickly and unwell writer. Will self explains the significance of the wound in Kafka; “The lesions Kafka was suffering in August 1917 were a ‘symbol’ of the greater ‘wound’ – a manifestation of a deep-seated malaise. The wound examined by the country doctor is caused by Kafka’s tuberculosis, its rings ripple out from Kafka’s tuberculosis, through his writings, and into the wider world.” For anyone who has read Kafka’s ‘Metamorphosis’ (most of us), Kafka’s troublesome wounds that Self speaks of remind us of the apple that is lodged in Gregor Samsa’s back when he morphs into a giant cockroach: Foul, rotting and stubbornly remaining.

After the lecture, I am shaking like a leaf as I ask for his autograph. “Yes” he says, naturally. Shockingly enough, he was only too happy to sign my copy of The London Review of Books and he even lets me borrow his pen in order to add my name to an events mailing list, without an ounce of reluctance! If he is seen complaining about his fans who forget to bring pens to literary events on the next series of Grumpy Old Men, we’ll know why. We move over to the free wine table to join his American editor, who, it turns out, is a fan of Charlotte Brontë. Will Self is fond of vintage objects; he is a keen collector and repairer of typewriters and, over drinks, grasps his cigarette holder prior to stepping outside.

When he can be separated from a copy of Kafka for five minutes, the Oxford graduate is a keen critic. He reviewed Owen Hatherley’s architecture essay ‘A Guide to the Ruins of Great Britain’. When commenting on this essay, Self paints a picture of dilapidated housing; “flats in north-east Glasgow, a series of huge steel-framed towers and ‘slabs’ clearly visible from the M8 as you drive into the city.” Self’s dark depiction of unpleasant, uncharacteristic and hostile flats displays a clear influence of- you’ve guessed it: Franz Kafka’s Prague, where the neglected and derelict flats were often empty and very cheap to rent.

In early 2012, Will Self became a Professor of Contemporary Thought at Brunel University. This year, he was rumoured to be commencing a role as BBC Radio Four’s writer in residence, which has yet to materialise. What will he do next?