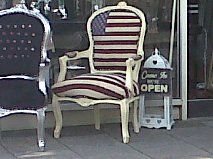 Composers start with chords and songwriters with an idea. In her poetry construction, Natasha Trethewey starts with a point in history and with “an historic

al question that I will then attempt to answer through my poems.” Trethewey explains that she chooses to answer her self-set historical questions in order to “make peace with our own personal past and our country’s own historical past.” Colonialism. Empire.  Making sense of – let alone making peace with – the past is a tall order, so how does she embark on such a task? The answer is not a vague but distinct one: She consults dictionary definitions, looking up vocabulary fundamental to her given “historical question”. Specifically, she refers to the Oxford English Dictionary (OED). It may seem odd that an American writer should reference a source rooted in British English and not American English, but the OED is a reigning authority on good English. It is the prescribed, standard account of correct English usage, the source that is instinctively consulted on any issue of ambiguity about the English language.

Trethewey is the daughter of a black father, also a poet, and white mother, who married when mixed race marriage was still illegal in the US. Ideas of cultural identity recur in her poems. The main themes that resonate through her poetry are: Colonialism, indigenousness and, conversely, exile and feeling ostracised. For anyone who studied the AQA exam board module ‘Poems from other Cultures and Traditions’ for GCSE English, her poems pleasantly ring many bells and deservingly lend themselves to commendable comparison with Maya Angelou. Trethewey explained that, when constructing a poem dealing with indigenousness, she firstly consulted – and was very surprised by – the OED’s definition of ‘Native’: The dictionary describes native as one “committed to upholding the values of the place in which they dwell”. Nevertheless, this surprise provided her with some inspiration and served as a lexicographical springboard for her artistry.

Natasha Trethewey is a great admirer of many British poets to whom she looks for inspiration: Metaphysical poet John Donne, Northern Ireland’s Seamus Heany, Liverpool-educated Carol Ann Duffy and former UK poet Laureates Ted Hughes and Andrew Motion. Trethewey’s inspiration by British poets, coupled with her use of the OED, a British publication, reminds us that Britons and Americans are divided by a common language. It is fitting that her poetry generates this message, for she is a poet firmly focussed on the concept of, to use a loose term, nationalities. She is poet of cultural identities. At her reading, Trethewey reads from a poem written partly in Hispanic. It is about a mixed-race child whom, she explains, is seen as “fading from one culture to another”. Her new collection, ‘Beyond Katrina’, set in the aftermath of Hurricane Katrina, focuses on the theme of “human destruction versus natural destruction”. For “human destruction”, ‘Empire’ seems the likely implication.

Having established her keen interest in cultural identity and the issues and history surrounding this, Natasha Trethewey engages her audience on the topic of the purpose, the use, function and relevance of poetry in modern and everyday life. Firstly, her father also wrote poetry while she was growing up and poetry writing served as a family activity. The two engaged in a friendly father-daughter artistic rivalry; “We always wanted to write a poem (each) about our memorable trip away, for years I kept putting it off”, she laughs. As it stands, she has succeeded in writing this poem, while her ‘rival’ has not. Trethewey believes poetry holds relevance beyond a family unit; “After 9/11, people turned to poetry for help and comfort”.

The most memorable anecdote of Natasha Trethewey’s talk was the story of her brother’s school reunion; “the most popular girl in high school confessed…’In the past twenty years, I’ve written some poems.’” It was newsworthy. That use of the word “confessed” leads Trethewey to her next point- poetry in secret; clandestine poets. “I wonder how many of you are secret poets…?” She says as she playfully scours a pointed finger over audience, her eyes glaring in jest. To her mind, poetry is more popular a pastime than we give it credit for.

Poignantly, Natasha Trethewey closed her talk by affirming that poetry and the process of poetry writing can sow the seeds of future hope. She recounts the story of her brother visiting prison inmates who write poetry. Choked on emotion and fighting back tears, Trethewey asserts that troubled people channel into poetry their desire to “work towards a future better than the difficult present time”: A desire held in poetry verses. Overcome with the emotion, the poet gracefully steps down from the podium and is handed a tissue. No further questions.