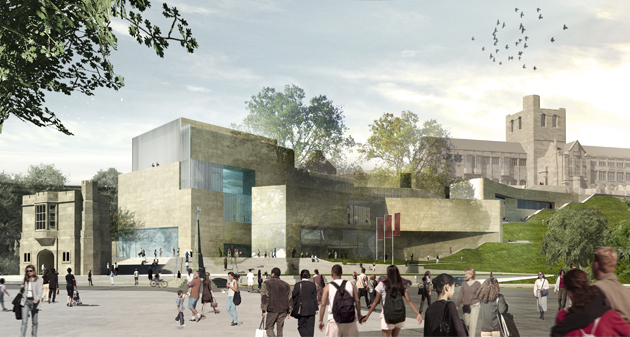 Pontio is the company behind the Arts & Innovation centre due to be built in Bangor. According to their original schedule, we should be writing this article from inside Pontio right now, however, major set-backs have forced the site to remain a bed of rubble. In wake of the recent crane appearance at the building’s location, our editor, LJ Taylor, thought it a good time to have a catch-up with our old friends at Pontio.

Elan ap Robert became Pontio’s first Artistic Director in April. Her role largely centres around developing and putting on a wide range of artistic events which you have no doubt seen advertised around Bangor. Elan sat down with Seren recently to give us a bit of an idea on what we could expect from Pontio’s artistic side as well as some of the lowdown on when we can expect to see the building completed.

We’ve noticed that there’s finally some movement on the site. We love the crane.

There’s actually going to be more cranes. I have organised a kind of crane dance event before…

Is that something we can perhaps look forward to for the ‘opening ceremony’?

We’re actually thinking of flying in a piano! [laughs]

I think that we’re going to hold a few different events to try and cater to more people, perhaps over a week or so. Maybe a big concert or production.

Obviously Pontio is not on schedule, what’s the new expected time?

We’re looking at April/May 2014 now. With May and August our ‘moving in period’ where we’ll check everythings how we want it, rearrange things as we need to ready for the start of the new academic year in September.

Can you explain what we should expect to find in the building?

There’ll be the Students’ Union, hopefully all on one floor of course. We’ll have a cinema that’ll seat 200 people and it’ll show a mixture of both arthouse and mainstream films. There’ll also be a studio theater with a 120 capacity. Our main theater will seat around 450 people but it’ll be quite a flexible place. We’ll be able to move the seating around in so many ways to cater to all events. Aisle seating, circular it’ll be completely versatile.

We’re going to be able to hold so many different events and there’ll be a real chance to connect for people. Chamber music with the musicians under the stage is also something we could do!

There will also be the ‘white box’ which is going to be a kind of multimedia innovation space. None of us really know what we will use it for yet because it could have so many uses and a lot of these things are about everyone trying them out and coming up with the new uses once we move in.

What’s happening with the construction?

Its about to start. I’ve actually learnt a lot about the processes you have to go through to build because of this. They are waiting on one more contract being signed and then the other cranes should arrive. We’ve had a number of problems with the foundations hence the setback but once it gets started now everything should be fine.

What’s going on with Pontio events?

Arts and innovation is the key thing with Pontio. And one of our most exciting events is going to be the psychology event on the 21st November. It combines both performance and science; and its original. They did one last year and it was brilliant it really made you think a lot. And wonder what is real.

We have a whole season of events, every season. We have some big ones coming up like blues star Mud Morganfield in December and we’re constantly screening films.

Do you worry that you don’t target at students enough?

We try to cater to students a lot. Pontio is a lot about bringing people together. Its a new departure and the idea of bringing communities together. And of course there will be the challenge for Pontio in that it won’t stop when term ends. We need to cater to everyone. That’s why the cinema is going to be so great because all of these people come from such different backgrounds but something like film really brings people together under one common interest. Everyone watches films.

We will of course be making sure that everything Pontio does will be economically accessible to students.

Are you going to reattempt an event like the Nick Grimshaw failure last year?

The problem with that kind of thing is that you really need to know what students want. We are going to be holding a comedy night next season which of course will be student tailored. And then there will be the retractable seating meaning that students can use these spaces for so many different things. Through the day a lot of our venues will be used for lectures, they will be for students.