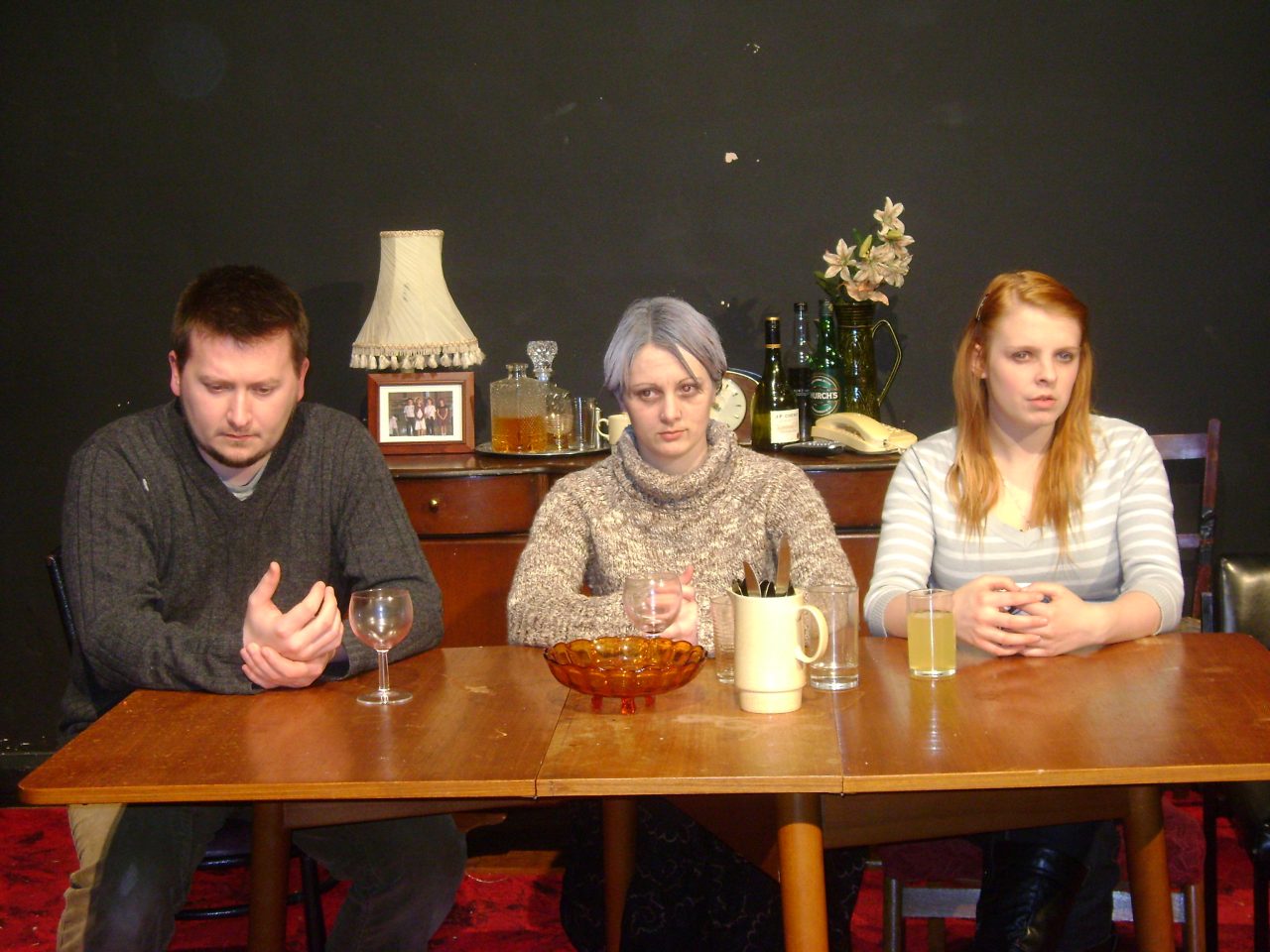 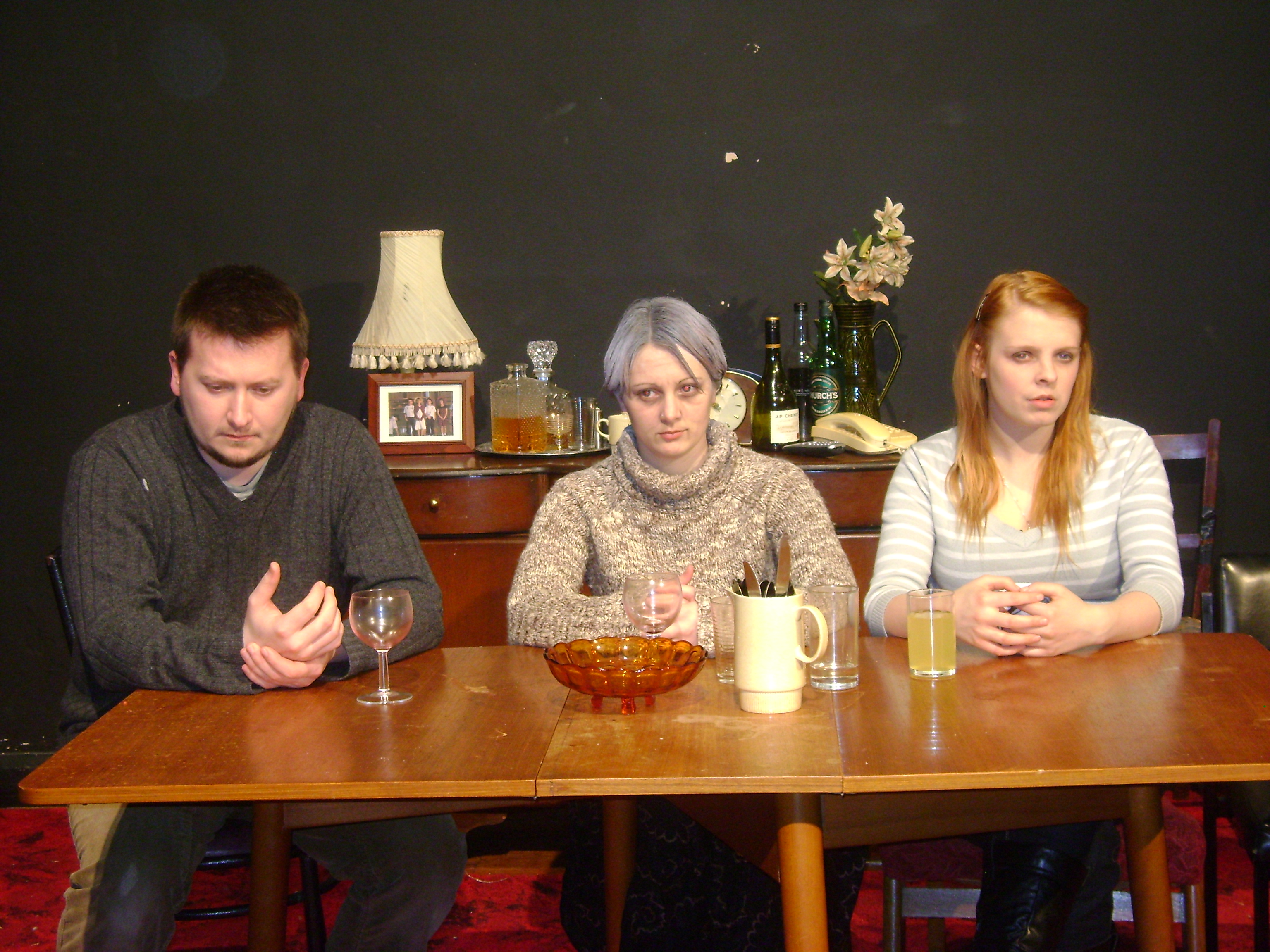 After some weeks of rehearsals in a frosty JP Hall, BEDS (Bangor English Drama Society) staged five performances over three days of their first play of the calendar year; Our Father. Penned by an associate of the group, the play is set in the fictional Hawkswaite, Lancashire. The drama unfolds when the father of the family dies, bringing all members of his immediate family together. But all is not well and the reunion is thorny.  In the ten years since they were all last together, nobody in the family is completely happy with the life they have since acquired and each of the family members have hardly anything in common. One son has had to deal with the issues surrounding his homosexuality and coming out. Anne, the only daughter, although working in her preferred industry, is struggling to pay her way in London while her mother is dissatisfied at her not producing any grandchildren, which only adds to her daughter’s woes. This all makes for very little warmth at the dinner table. Abigail Gregory was very convincing as Anne, who, despite all her frets and worries, continues to mock and jeer her capitalist brother. Instead, the family members hide secrets from one another. One of the earliest secrets to be revealed is that mother and now-deceased father were contemplating divorce prior to the death. The strength of the play lies in the fact that at consecutive points throughout its course, the plot thickens, a new secret is uncovered, a new layer of dark and deceitful truth unfolded that shapes the audience’s understanding of the characters. After the initial shock of his passing, the cause of the father’s death is later revealed to be suicide by gunshot. At the very end of the play, it is revealed that Anne is so reluctant to be a mother due to a previous miscarriage and that the wife of the deceased gained a sense of freedom on becoming a widow.

The theme of suicide by gunshot and immediate response thereto is too dealt with in Woody Allen’s film Hannah and Her Sisters. When Mickey Sachs’ (played by Allen) attempted suicide fails, the sound of a bullet hitting a wall causes several highly concerned neighbours to make sure that the surviving character is quite alright. Their concern is overwhelming. On witnessing their anxious and shocked response, Sachs is unable to believe he ever contemplated taking his own life. This is in stark and dark contrast to the response of the wife in Our Father, who hears her husband’s death at his own hands. As the fatal bullet sings out, she soliloquises “I hope you didn’t miss”, this is the chilling line that closes the play and was delivered with flawless malice and hate by Laura Kirk.

The drama was intense and the animosity between the characters and their pain very believable. For this play, BEDS bravely ditched the stage, and used the floor of JP Hall with all recurring sets laid out. It was effective, atmospheric and efficient lighting that took the audience, sat on cushions and beanbags dispersed between the action, to the relevant location. The group’s next production will be the long-anticipated and somewhat more light-hearted 221 B. Curtain for that goes up on the weekend of the 18th February. Stay tuned.