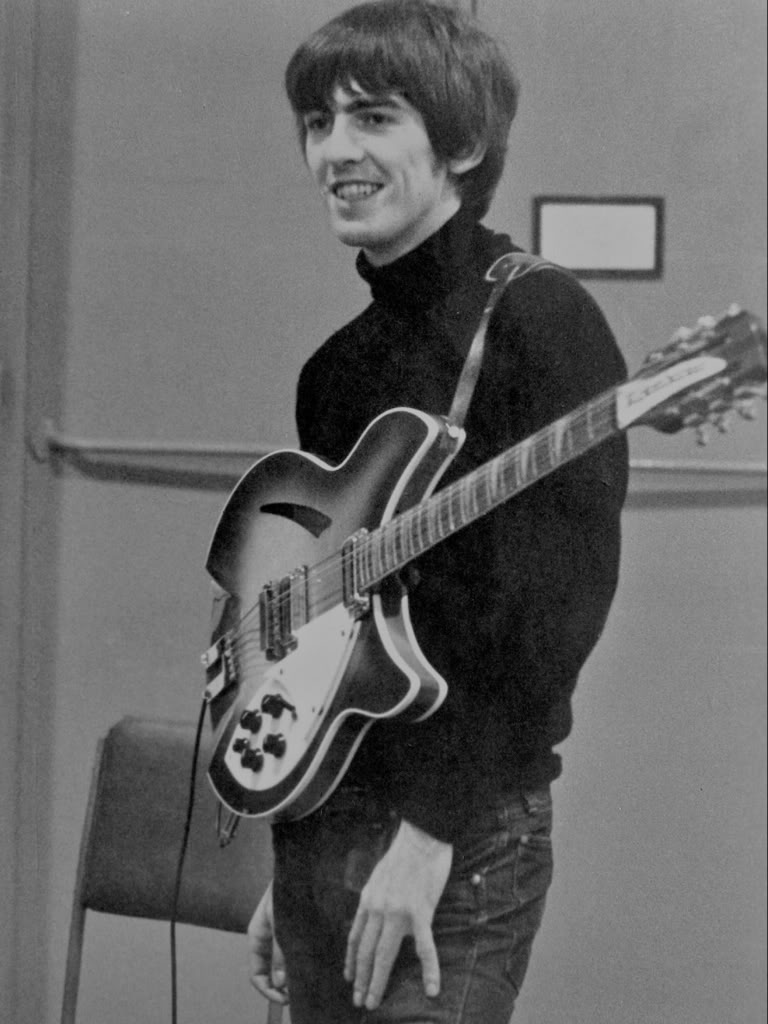 It does feel like years since he’s been here; this 29th November marks the tenth anniversary of the death of the youngest and quiet Beatle, who lost his battle with lung cancer at the age of 58. George Harrison was the finger-picking genius of the four-piece, performing the finger style sections in the instrumental breaks of the band’s most memorable hits. Honey Don’t is an early Beatles cover of a Carl Perkins song, in which Ringo Starr -unusually the singer on the track- warmly instructs “Rock on, George, one time for me”. You can then hear Harrison vocalising through the notes of his solo, conversing with Starr through the frets on his painted Gretsch guitar. Similarly, the iconic track And I Love Her, a Beatles piece they famously performed live at the BBC, contains from its outset a distinctive and much-loved finger style riff that was Harrison’s creation; he composed it spontaneously while Paul McCartney strummed the already-established chord sequence.

Living in the Material World, a documentary commissioned by the BBC, explores the life of the quiet Beatle. Within the first ten minutes, McCartney delivers the story of how George Harrison made it into the band. The son of a bus driver was, coincidentally, auditioned by McCartney and John Lennon on the upper level of a double-decker bus; he delivered a note-perfect recital of a piece called Raunchy and, despite his young age, was admitted to the band that would become The Beatles. This anecdote is a staple of any Beatlemaniac who occasionally talks in their local instead of spending all their time and money at the jukebox, queuing up Beatles tracks and debating whether Abbey Road or Sgt Peppers is the better album (most will opt for the most experiemental Beatles album, Sgt. Peppers).

In the initial stages of The Beatles’ career and amid the first screams of Beatlemania, Harrison was often side-stepped and marginalised, despite being, in name at least, their lead guitarist. It was the symmetry of the Lennon-McCartney guitars that dominated atop a stage and any attention that could possibly be diverted from them went to the metronome that was Ringo’s mop head on the raised background platform. Like Harrison’s own lead guitar solos, the man himself was not obvious from the very first moment the music started, but as it continued and entered its different phases, he gained a more blatant and mesmerising presence, coming into his own and developing as both a songwriter and performer. Harrison, The Beatles agreed, would sing one track on each album. The first one of these was Do You Want to Know a Secret?, a Lennon-McCartney penned song on the The Beatles’ debut album, Please Please Me. On the album Beatles for Sale, (on which the aforementioned track Honey Don’t appears), Harrison memorably performed vocals on Everybody’s Trying To Be My Baby, another track from the pen of his hero, Carl Perkins. The idea of George Harrison’s performing vocals little and -if not often then- certainly regularly, gathered momentum, while innumerable girls un-gently screamed; the commonest symptom of a recognised and incurable condition known as Beatlemania.

Eventually, Harrison was singing his own numbers on Beatles albums which may only be northern songs but which did -and still do- shine and stand out on their own merit. On Rubber Soul, Harrison sings his self-written track If I Needed Someone. The first Beatle to marry wrote this song about his first wife, Patty Boyd. She also appeared as the quintessential Beatlemaniac –young and coy- in the film A Hard Day’s Night, in a memorable scene depicting the Fab Four singing Should Have Known Better over a game of cards. Abbey Road, the band’s last recorded and penultimately released album, features two of Harrison’s trademark songs; Something and Here Comes the Sun. Frank Sinatra- the antithesis of The Beatles as a performer- considered the former “the best love song ever recorded”. He respected it so much he covered it himself, and well. The latter Harrison number was inspired by the emergence of the silver (or possibly golden?) lining and The Beatles’ raised morale in the aftermath of Brian Epstein’s (The Beatles’ manager) death. Harrison wrote this as their mourning and grieving period, their “long, cold, lonely winter”, ended. A respectable and likeable cover has too been made of this track, and also by an American artist; former music teacher Sheryl Crow, whose version featured in the film Bee Movie.

On the sombre news of his demise, some of the biggest names in musical history publicly paid their respects to the Beatle. McCartney and Starr called him “my baby brother” and “a best friend of mine” respectively. Bob Dylan, Harrison’s co-performer in super group The Travelling Wilburys, made mention of his “wit and humour”. Indeed, Harrison possessed an upbeat wit and sense of humour that led him to answer the question from a Times journalist “What do you call that haircut you’re wearing?” with “Arthur” and to continue deliberately avoiding taxation throughout his cancer battle, even when his illness looked terminal, his witty and humorous mind was responsible for some of the most catchy, endearing and addictive riffs in the history of popular culture. My mind’s still set on you, George.