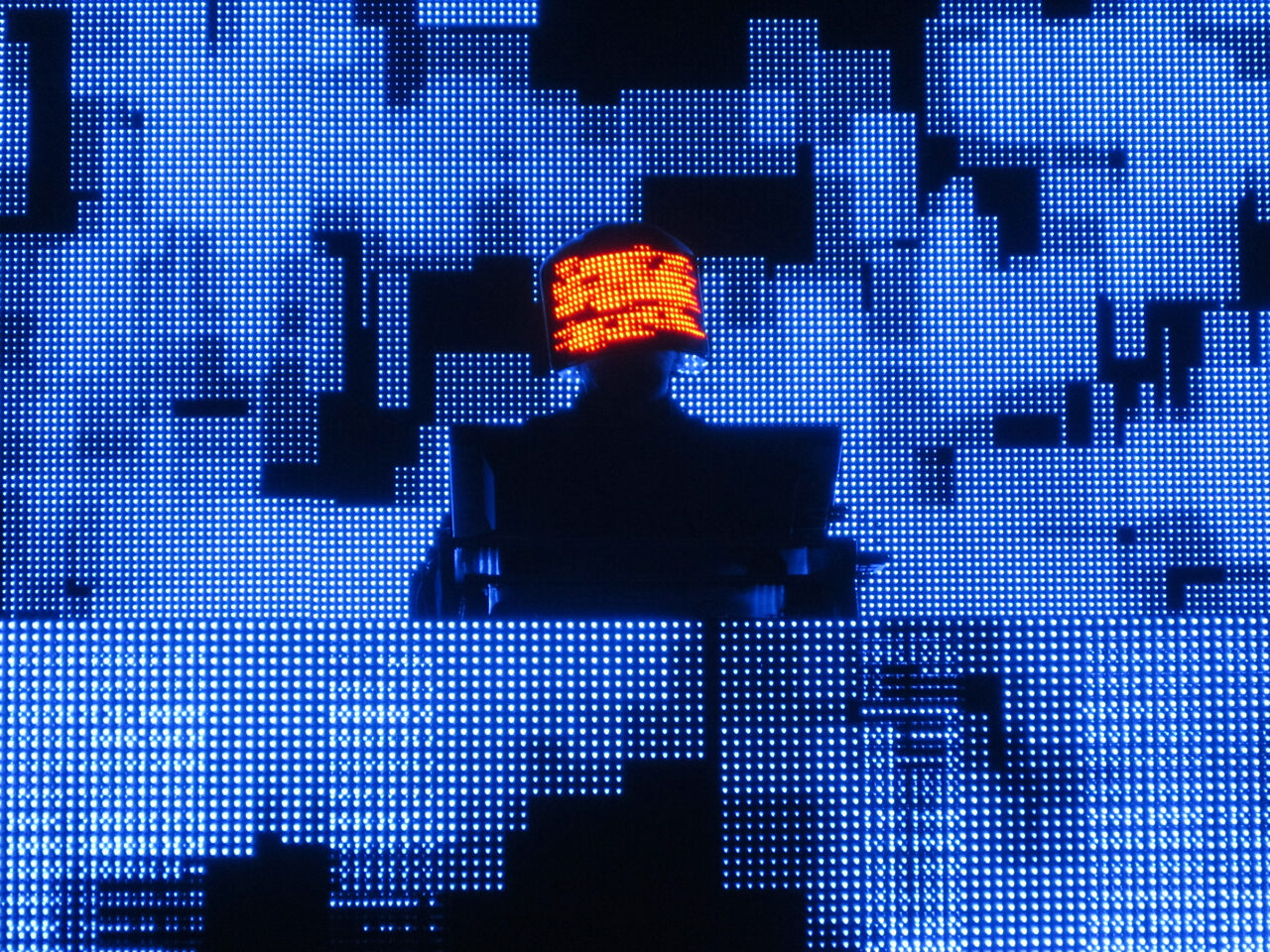 Ever since his breakthrough in the late 1990s with Hard Normal Daddy, Thomas Jenkinson has been an enthralling and unique presence within Warp Records, one of the most innovative and uncompromising labels in the UK. Whilst new record “Be Up A Hello” wasn’t the stunning record its singles suggested it would be, “Neverlevers”, along with other single “Oberlove”, is a formidable piece of electronic music. A helter-skelter drum beat and spluttering bassline veer and jitter frantically as cold slabs of synth float above. It turns the fast rhythms of drum and bass into something as jarring and alien as it is exhilarating. Whilst this doesn’t contain the jazz melodies present in much of Jenkinson’s material, it is a piece of Warp-style “drill and bass” that makes the staggering complex and cluttered compelling.

After a surprise return with 2019’s “Drift Code”, Rustin Man (or Paul Webb) released only their third album in 18 years with “Clockdust”. Lead single Jackie’s Room was arguably the highlight of a very impressive record, drifting along on a soft jazz-rock guitar melody that could last forever. Webb, a member of the new wave and later rock innovators Talk Talk, brings the same sense of drifting and atmosphere to Rustin Man as Talk Talk magnum opus Laughing Stock. There is also something in Webb’s tired but affectingly fragile voice that sits somewhere between the Canterbury prog of Robert Wyatt and the plaintive, crushing melancholy of David Bowie’s “Blackstar”. A beautifully accomplished song, its gentle but emotionally heavy tone makes “Jackie’s Room” one of the most underrated singles of the year.

The beginning of a new decade saw a second, and far more productive, Strokes reunion. The New York indie rockers opened with the quirky At The Door, but on their second single “Bad Decisions”, they created a classy hit to carry “The New Abnormal”. Opening with a glassy but imposing riff in the mould of New Order or The Police, the song doesn’t take long to devolve into the layered, melodic indie sound the band are modern masters of. Guitar lines from Nick Valenti and Albert Hammond Jr. provide counterpoints to the driving rhythm section and Julian Casablancas’ soaring vocal. “Bad Decisions” has a familiarity that is comforting, showing the band could still record releases that could stand up to their now iconic early 2000s records.

From best-selling indie rock to some of the most obscure music featured in Seren, Panda Rosa’s rambling record “The Kinspiral” lacked singles, but had a song far too impressive to go without mention. The Aussie one-man project is an often beautiful mesh of a cinematic sense of scale and meticulous, lushly produced soundscapes, with “Grave Suffering… Infinite Questions…” epitomising this. The insistent, sombre keyboard melody and tribal drum beat roll on relentlessly, as muffled, pleading vocals, slight but lovely guitar melodies and synth pads float in and out of the mix. It has an aspect of the spiritually open, world-music influenced sound that artists from Peter Gabriel to Enya and Dead Can Dance represented in the 1980s, both lush and strangely grounded in place.  It is unquestionably the section of an over 2-hour album that is most fully realised, and is an exciting statement for an artist still developing their sound.

In the London live scene, HMLTD have long been an exciting artist, a strange mix of post-punk, modern synthpop and glam flamboyance. On their long-awaited debut album “West of Eden”, there is a huge range of sounds, from tense minimal electronics to hectic yet sleazy rock. Arguably the highlight however is “Mikey’s Song”, a piece of shimmering synth pop. The longing romance is reflected in the shimmering synth sequences and beautifully plastic drum machine sound before the song erupts in its outro. Henry Chisholm’s theatrical vocals burst into the foreground alongside beautifully melodramatic backing vocals. The desperation and unhealthy longing in the lyrics suddenly hits home in the song’s mood to beautiful effect. Add in a catchy, syrupy chorus and this is a fantastic piece of transgressive, peculiar pop music.

Reaching the halfway point in this list is another excellent reworking of a song, this time Lianne La Havas’ cover of Radiohead’s “Weird Fishes.” After an endearingly cheeky false start with a drum beat identical to the original, a slower, almost trip-hop groove emerges alongside crystalline keyboards and La Havas’ husky, soulful voice. If the song had just been turned into a piece of delightful, arty soul it would have been impressive enough, but as the instrumentation fades out, leaving only La Havas’ voice. The way the song re-emerges with smokey guitar lines and swelling synth melodies is one of the most soaring, uplifting crescendos of any song this year, taking the song from restless quiet to lush euphoria. La Havas has arguably released her most accomplished album yet, with her wonderfully fresh take on “Weird Fishes” among the finest parts of the record.

At the heavier end of the spectrum, French psych rockers Slift created an impressive breakthrough record in “Ummon”, a raucous yet hazy slab of spacey rock and fuzzy ecstasy. With the particularly stunning title track being released as a single in 2019, “Hyperion” takes its place admirably. One of many songs to make use of a quiet, more spacey verse before bursting into life in the chorus, the soaring fuzzy riffs and spiralling, insistent riffs make this immediately memorable. Also vital is the driving, tight rhythm section and the wah-heavy guitar leads that spit out from Jean F. throughout the song. The aggressively chanted vocals carry you along, being a major factor as to how an album as long and consistent in sound is still impressive. Slift are a new face in the modern psychedelic scene, with “Hyperion” one of a number of excellent tracks on “Ummon”.

The Lemon Twigs have for a number of years been a flamboyant, glam-inspired breath of fresh air in the American indie scene, with 2018’s rock opera “Go To School” being a beautiful and at times touching narrative condensed into sharp, quirky rock. “Songs For The General Public”, their latest record, is more straightforward and one of the numerous singles released for the record; “No One Holds You (Closer Than The One You Haven’t Met”, is a gem of quirky pop rock. The glossy piano and gurgling synth bassline come alongside the irresistibly 70s tinged vocals of Brian D’Addario. The chorus, a catchy and soaring chorus in the mould of the best 70s rock, is delightfully sweet. There is an absurd energy to the single generally, with the smooth synth solos coming alongside theatrical backing vocals that are perfect in their melodrama. The Lemon Twigs remain a delightfully straightforward band, modernising a sound that has been immortalised in millions of records, but their songwriting has arguably has never been as sharp as now.

A rare debut single in this list, Caroline are an artist associated with the London avant-garde scene that has spawned the demented noise-rock of Black Midi and Black Country, New Road. Their music sits in a far more solemn and introspective space however, with “Dark Blue” being a tremendous statement of intent. The droning guitar riff, warm and yet disconcertingly minimal is slowly joined by droning violin, washing cymbals and the morose, defeated vocals of Casper Hughes. It is a relentless series of grinding repetition, building a pensive atmosphere that few bands this year have achieved with this success. The band sits somewhere in between the more progressive instincts of 90s “post-rock” and the purer emotive response of the “slowcore” and folk-rock bands of a similar period. Whatever their band’s future trajectory, this shows a talented and disciplined group of musicians creating a song notable for its maturity and intelligent composition. Hopefully 2021 will see the release of more music.

One of a fairly impressive Mercury Prize shortlist for this year, indie rock band Porridge Radio broke through with the steady if fairly conventional “Every Bad”. A song that absolutely convulses with anxiety and fury is “Sweet” however, unquestionably the band’s signature song. The dry, unassuming guitar alongside Dana Margolin’s magnetic vocal presence is uncanny enough on its own before the way the song disintegrates into its raucous fuzzy guitar hook. The song closes in much the same way as it begins, pensive and sombre after the fuzzy outbursts. The way Margolin pleads lyrics like “I am charming, I am sweet” conveys perfectly the insecurity that “Sweet” is ridden with. The lyrics are generally beautifully evocative and oddly gripping. “Sweet’s” format is simple, but its execution is devastating.