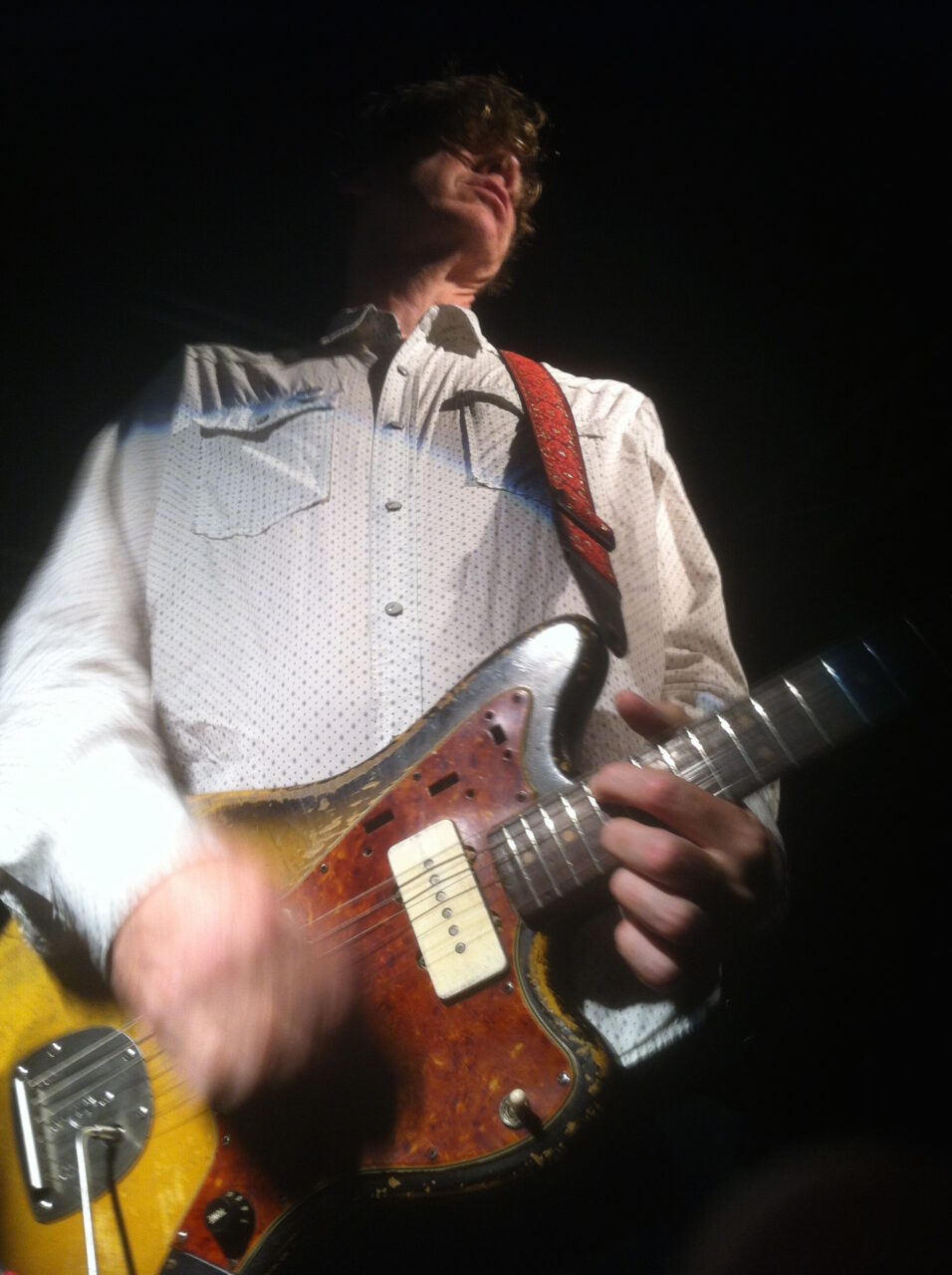 Since Sonic Youth broke up in 2011, and long before, guitarist Thurston Moore has been by far the most productive individual member of the indie and noise-rock icons. After last years’ colossal and heavily orchestrated “Spirit Counsel”, and with records like “Rock n Roll Consciousness” from recent years, “By the Fire” was an attempt to meld the more adventurous experimentation with a more mainstream appeal. “Cantaloupe” stands as one of the more successful examples of the latter; the palm-muted riff is almost hard rock-esque, recalling Moore’s love of the Stooges, managing to place his unique guitar sound within a fairly conventional rock song structure. It manages to sound neither cynical nor out of place, putting a noisy sheen on modern alternative rock in a typically compelling way. It even has a bizarrely melodic guitar solo that works.

Having made albums that sampled the sounds of a washing machine and plastic toys, electronic music duo Matmos have never made the same album twice and their latest project is possibly their most ambitious yet. “The Consuming Flame: Open Exercises in Group Form” is a rambling collection of songs, including collaborations with Yo La Tengo, Clipping and Oneohtrix Point Never. Lead single “No Concept” is among the best parts of this album. Beginning with arcane glitchy electronic sound, it develops into a hurtling backbeat with rumbling bass synth. This beat dissipates and returns seemingly at will, whether to isolate an odd, dissonant melody or to veer into a noisy freak-out. And all of this is in just over 3 minutes. It serves as an excellent synthesis of the collection’s sound, and also one of the examples of this sound creating something more than an intriguing sound experiment.

90s psychedelic legends The Flaming Lips have had something of a return to form in the last few years, with last year’s strangely ethereal “Kings Mouth”, and their latest album “American Head”. “Flowers of Neptune 6” is the album’s lead single and, arguably, its highlight. Its plaintive acoustic guitar chords alongside the watery, heavily affected production takes you back to their peak on albums like “The Soft Bulletin”. The way the sound implodes into a cacophony of synth and vocal harmonies in the song’s chorus also reminds me of the band’s glorious peak. Wayne Coyne’s vocals also sound strong. It has a warm, comforting sound, brimming with the humanity of early Flaming Lips, but perhaps sounding wearier in the best way possible. A band who are one of the masters of layered, obsessively-detailed pop return again with another beautiful song.

One of a colossal number of singles released this year by experimental hip hop artist Devaughn Hendrycks, also known as JPEGMAFIA, “BALD!” best captures the absurd humour and playful instrumentation of last years’ much acclaimed “All My Heroes Are Cornballs”. With a rapid-fire drum and bass beat alongside ethereal, delicate keyboard textures, the often-ridiculous and self-aware lyrics of Hendrycks shine through. The ridiculous bragging, often followed by self-deprecating references to his hairline and references to wrestlers, are what makes JPEGMAFIA so unique; he’s one of the rappers who has most effectively grasped internet culture and immersed itself in all its absurdities. “BALD!” doesn’t overstay its welcome, but it is a beautifully produced and incisive track that highlights, once again, the unique style of JPEGMAFIA.

In an otherwise slightly disappointing record from Meghan Remy’s pop project US Girls, “Overtime” shines. With a stomping beat and a 70s soul style, “Overtime” is insistently rhythmic and in the lyrical themes of overwork and the health problems that come with economic insecurity, it manages to have a power much of the album doesn’t. Remy delivers a beautiful and passionate vocal performance, delivering the song’s theme in a way that is neither overly complicated or sloganeering. It is a retro-inspired spark of energy in an album that otherwise drags at times.

45 years after being recorded, Neil Young’s lost album “Homegrown” was finally released. Situated towards the end of Young’s notorious “ditch period”, a spell of personal grief that yielded some of his most emotionally powerful material, “Homegrown” certainly doesn’t have the tragic context of records like “Tonight’s The Night”. But with songs like “Try”, it certainly has some lovely music. A fairly typical piece of country rock, “Try” is an earnest admission of love that is soft in a similar vein to albums like “Harvest” and “Comes A Time”. Its soft acoustic guitar and occasional backing vocals create a song so syrupy smooth it’s hard to imagine this was the same man who inspired many grunge artists in the 90s. It also manages to maintain the weariness that is understandably present when considering the albums that preceded it. “Try” is a return to the best of Young, a song that is resplendent in its honesty and simplicity.

After 2019’s “Town Centre” EP, Squid appears to be one of the next experimental punk artists to break through after Black Midi. “Sludge” is one of the band’s finest singles yet, replete with glitchy noise, a relentless driving groove and the as ever impassioned vocals of Ollie Judge. There’s a clear influence from the krautrock of bands like Neu! and the dance-punk of bands like Liars, but with an added intensity from “Town Centre”. As the bassline rumbles on and the rest of the band play around the groove, guitar strings scratching and synths bursting into the foreground, it highlights the band’s ability to immerse the listener in its sound in a way only the best artists can. Squid’s anxious, volatile world is one that hopefully will be delved into by many more people over the next few years, and songs like “Sludge” are an excellent step towards this becoming a reality.

Picking up the torch from the more aggressive side of Nick Cave & The Bad Seeds or The Gun Club, BAMBARA’s “Stray” has much of the manic darkness of those artists, being a superb expression of a sound somewhat forgotten by either the original artists or upcoming artists. “Heat Lightning” has a stomping, colossal drum sound and walls of furious guitar alongside the deep, imposing voice of Reid Bateh. It is a hedonistic three and a half minute stomp, filled with the fury of gothic rockers from Bauhaus to Nick Cave. Bateh’s lyrics are also beautifully poetic, like the best of Cave’s darker years in their violent, fire and brimstone scenes. “Stray” as a whole is an extremely accomplished album, not just faithfully reviving this style of gothic rock and post-punk, but with an atmosphere and an energy few other artists have been able to pull off.

As the guitarist and vocalist for Thee Oh Sees, John Dwyer already heads up one of the most productive, dynamic and consistent bands in modern psychedelia. This year saw him begin another side-project called Bent Arcana, with the opening release of the band being “The Gate”. Immediately being smoother and jazzier than anything Dwyer has put out up to this point, Bent Arcana recalls the 70s jazz fusion of Miles Davis, Herbie Hancock or Weather Report, mixing rock rhythms and electric instrumentation with jazz improvisation. “The Gate” begins with a complex and pulsing drum beat before the clarinet and violin play the opening melody. The song uses repetition brilliantly over its 10-minute length, repeating melodic hooks over and over again until new ones fade into the foreground. It is one of the finest modern examples of this kind of early jazz fusion, where the band almost feels like an interconnected whole, driven by the groove as they grapple with the style. Dwyer has put together a superb cast of musicians here, with the improvisations being both melodic and never tasteless. The album that was released after was also impressive, but nothing has matched up to “The Gate” as of yet.

Clipping have managed to carve out an impressive niche in a scene that has become filled with hip-hop artists dabbling in harsher, more industrial textures from Danny Brown to Death Grips. Their embrace of horror movies carries the threat of being a somewhat absurd recalling of b-movie horror tropes, but instead they have created some of the most consistently entertaining and hard-hitting hip-hop of the last few years. This has culminated in the trio’s last two albums, “There Existed an Addiction to Blood” and “Visions of Bodies Being Burned”; both albums being highly acclaimed and excellent records. The latter’s lead single “Say the Name” has an irresistible groove and a spluttering synth bassline. Alongside the trio’s typically ominous lyrics, the way the song builds into its clattering, dense outro highlights the group’s ability to create some of the most exciting, unique beats. The pitch shifted sample from the Scarface track “Mind Playing Tricks on Me” that repeats throughout much of the song is also ingenious and highly distinctive, adding to the song’s eerie atmosphere. Clipping have been a real break-out success of the last few years, “Say the Name” being among the peaks of this spell.