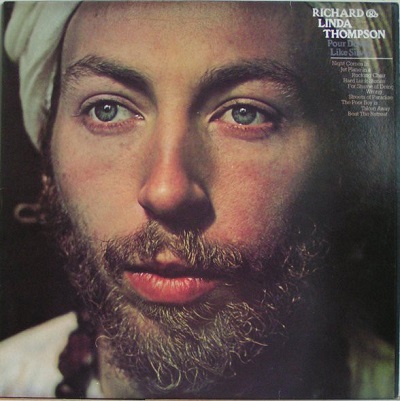 The 70s was a period of huge success for folk rock in Western Popular Music. Following Bob Dylan’s infamous concert at the Newport Folk Festival in July 1965, the electric guitar found its way into folk music. The most notable band to adopt this sound across the Atlantic was Fairport Convention. Formed in a house called Fairport in London, the band took obvious cues from Dylan, often covering his songs. Musicians such as Sandy Denny, Ashley Hutchings and, arguably most notably, guitarist Richard Thompson became stars of the folk scene. Thompson in particular has had a huge impact, having released music now for over 50 years and being a hugely acclaimed guitarist.

By the mid-70s his career had taken an intriguing turn. After leaving Fairport in early 1971, his debut solo album “Henry the Human Fly” sold poorly the following year, perceived as not utilising his guitar talents enough in favour of more low-key songs. Following this he married Linda Peters, a backing singer on his album, and by 1974 released “I Want To See The Bright Lights Tonight” under the name Richard & Linda Thompson. Whilst it didn’t sell particularly well either, their debut stands as one of the most emotionally powerful debuts of the decade. At times oppressively miserable, Thompson once again sacrificed individual expression for an album of songs about drunks, depression and failing relationships.

By the time of “Pour Down Like Silver”, the Thompsons had also found faith. Living in a Sufi Islamic Commune, Richard was at one stage discouraged from playing his instrument according to his manager at the time, and even for the odd and often uncommercial musicians on the roster of Island Records, he seemed very disconnected from the mainstream. After releasing the cheerier and more twee “Hokey Pokey” earlier in the year, “Pour Down Like Silver” was released 45 years ago this month. The album is in many ways a collage of the different contexts surrounding the album. Songs such as “Beat the Retreat” and particularly closer “Dimming of the Day” pretty clearly discuss the couple’s faith, whilst other songs continue in a vein similar to their previous two records. “Jet Plane In A Rocking Chair” has a similar absurdism to parts of “Hokey Pokey”, arguably jarring with the more contemplative rest of the album, whilst opener “Streets of Paradise” continues in a similar bent to the opener of “Bright Lights”.

Whereas “Bright Lights’” opener “When I Get To The Border” describes trying to find a release from the pains of everyday life as being like stepping into a different country and exiting your previous life, “Streets of Paradise” sees this in more openly religious terms, viewing the release fairly clearly as the afterlife. Otherwise songs such as “For Shame Of Doing Wrong” or “Hard Luck Stories” follow a similar path to songs sung by Linda on “Bright Lights” in their bleak, morose style. There is also, whether intentionally or not, a return of Richard Thompson’s guitar. The swelling beauty of the opening of “Streets of Paradise”, the beautiful solos on the over 8 minute “Night Comes In” or in the performance of the traditional folk song “Dargai” that closes the album all highlight his soulful yet nimble guitarwork. It has a stark beauty to it that is a real contrast to any of the rest of their material. Where “Bright Lights’” gloom overwhelms, or an album like “First Light’s” religious imagery is clumsy, “Pour Down Like Silver” is neither miserable nor on the nose. It shimmers through the gloom of its subject matter, and sees faith as a resolution to these troubles.

Following this, the two released 3 more albums, 2 of which seemed like quirky attempts at more mainstream attention, particularly in the case of 1979’s “Sunnyvista”, which clearly took some inspiration from the “new-wave” artists that dominated rock and pop at the time. Their final album, 1982’s “Shoot Out The Lights”, was both a critical success, and also was the end for both their musical partnership and marriage. During a subsequent tour, they separated.

Richard Thompson has since carved out a fairly successful solo career, a musician capable of both the most evocative and beautiful folk, avant-garde oddities or mainstream rock of the highest order. Linda Thompson too has written a song that was nominated for a Grammy after being performed by Emmylou Harris, Dolly Parton and Linda Ronstadt in 1987. The period in the mid-1970s however saw the two at their peak, creating music that managed to turn the personal into something universally poignant, putting their incredible talents towards devastating, but often quite inspiring music.