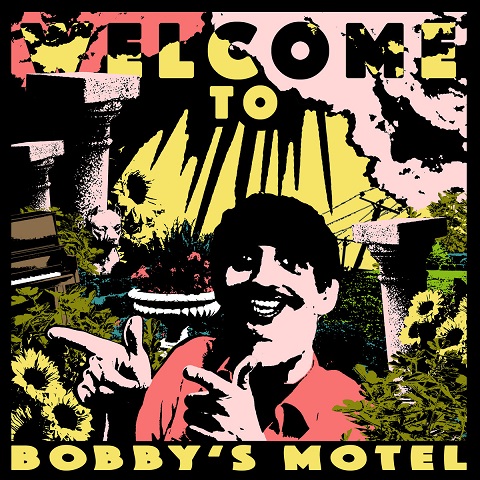 As relentlessly rhythmic as it is surreal, Canadian punk band Pottery’s debut album is brimming with zany personality. Beginning with the hazy, psychedelic title track, ‘Welcome to Bobby’s Motel’ contrasts sharply between atmospheric anxiety and the raucous, bassline-driven post-punk heard most famously from Talking Heads, but also contemporaries like Parquet Courts or Uranium Club. The bassline’s thunders while guitar melodies rattle in response. The Talking Heads comparison is probably the most apt within the record. Anxiety seeps through the vocals of Austin Boylan in a way very similar to Talking Heads’ David Byrne. The lyrics, often disconnected from one another, but also strangely familiar, feels to some degree like the more claustrophobic and urban centric songs on Talking Heads’ ‘Fear of Music’ like ‘Cities’.

There are however intriguing divergences from this sound. NY Inn sounds as if Nick Cave is fronting a less cathartic and more energetic version of his original band ‘The Birthday Party’ and in the two slower tracks on the record, Pottery develops an unexpected pop sensibility. ‘Reflection’ and particularly the charmingly cheesy ‘Hot Like Jungle’ have an 80s pop shimmer to them that works quite well to break up the frenetic grooves of songs like ‘Down In The Dumps’ or ‘What’s In Fashion?’. Possibly the centerpiece of the album however is the two parts of ‘Texas Drums’. A song so intently focused on its pulsating grooves, it sits perfectly in between the album’s droning atmospherics and sense of rhythm. Synths burst through layers of guitar and bass hooks as the song becomes increasingly frenzied. The interplay between the musicians is dense and complex in a way more similar to Fela Kuti or some James Brown. All in all, Pottery’s debut is a triumph.  Rather than feeling like a loose collage of different influences, Pottery creates something unified and complete. Its zany lyrical imagery unifies the album’s songs into a coherent and bizarre style.