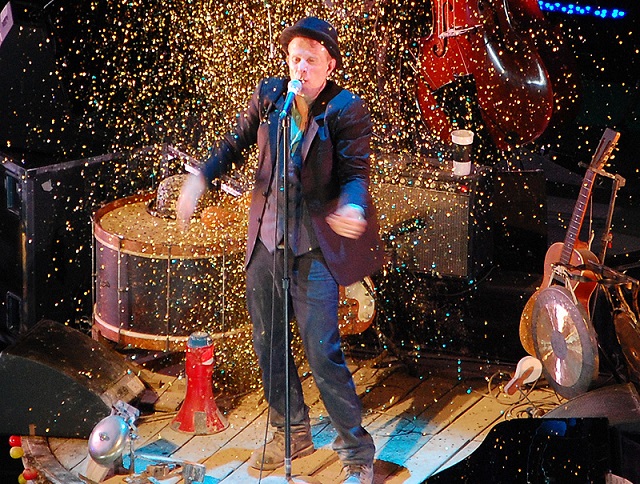 As the 1970s ended, so many of the most affecting and prominent songwriters of the previous decade were struggling to keep up with the radically different context. The combination of new, affordable technology and a radically different political context created a new style of pop and mainstream rock. Musicians from Bob Dylan to Joni Mitchell and Neil Young struggled with this reality, either desperately tacking themselves to the new trends or struggling to find a new identity. Whilst others like Leonard Cohen were enormously successful and critically acclaimed during this decade, there is possibly no more of an outstanding transition than that of Tom Waits. Waits was always an outsider, distinguishing himself from his contemporaries with his gruff voice and imagery recalling the beat poets of the 50s and 60s. Albums like ‘Closing Time’ and ‘The Heart of Saturday Night’ were driven brilliantly by Waits’ alcohol fueled tales of grimy streets and broken hearts, but the 1980s saw this crystallise into something even more bizarre.

Two events, his marriage to Kathleen Brennan in 1980 and his move to Island Records, were key. The latter saw him enter the intensely creative environment that birthed everything from the troubled folk of Nick Drake to the alien glam of Roxy Music in the previous decade. Waits met Brennan on the set of 1982’s ‘One From The Heart’, a film Waits made the soundtrack to. Brennan proved to be not just his wife, but also a major force in his music. Introducing him to Captain Beefheart’s warped blues and the experimental classical music of Harry Partch, 1983’s ‘Swordfishtrombones’ was a colossal shift. Soothing marimbas clashed with jagged guitars and rattling percussion. Bagpipes appear alongside strident brass and an even more extreme Waits vocal. Sounding cartoonishly unhinged, the themes became that way too. Songs like ‘16 Shells from a 30.6’ brim with menace and violence in a way his 70s material never quite could.

Whilst ‘Swordfish’ is now regarded as a classic, the experimentation met more immediate acclaim on 1985’s ‘Rain Dogs’. The album is dense with lyrical and musical detail, feeling like the songs of the most deranged musical. Guests from jazz oddities like John Lurie and Marc Ribot to rock legends like Keith Richards add incredible talent to this release. The instrumentation is perhaps less bizarre than ‘Swordfish’ but it is in the album’s imagery where it succeeds. Songs depict everything from quirky, long dead relatives to prisoners facing execution, all with surprising sincerity. Waits has always been playing a part in his songs, but the parts he plays, perhaps partially due to the bond with his wife over film, are rarely as vital before or after. Moments like Downtown Train, later covered to huge success by Rod Stewart, even inject heartfelt moments into the album’s strange atmosphere. His material ever since has not diverged too much from this formula, leading to one of the most consistent discographies of an artist with a career as long as his. Tom Waits defied every trend with his 80’s releases, creating some of the most evocative music of the decade.