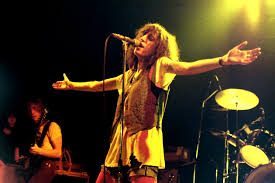 Feminism and rock music have often had a somewhat fractured relationship. The often barely hidden misogyny found in everything from the blues that inspired rock to a huge range and history and worryingly persistent issues  of sexual harassment at concerts has hardly made this disparate set of scenes particularly inviting for women. Punk however is a notable exception. Whilst of course the crude sexism of much of rock can still be found in artists like The Stranglers, punk has more often than not been a riposte to rather than a promoter of misogyny. This began arguably with one of the earliest punk-adjacent artists in the New York scene. Patti Smith’s early albums were a bolt from the blue, combining evocative spoken-word with the punky energy of much of the New York counter-culture from The Velvet Underground to Television and Talking Heads . Whilst she hasn’t ever committed to being a feminist, with many of her most socially-conscious songs being rooted more in critiques of American capitalism, her austere, confrontational style broke apart the conceptions of what music women could create. Following on from this, the late 1970’s saw a number of female-fronted or even all-female punk bands gain traction. The X-Ray Spex’s confrontational punk style saw their anti-capitalist political views expressed often with a feminist edge. This was best expressed in their classic single ‘Oh Bondage Up Yours!’, an expression of anti-consumerist politics in deeply sexualised terms alongside songs on their debut album such as ‘Art-I-Ficial’ which were more clear in their feminist politics. A part of that punk/post-punk scene that contained two of the most intriguing feminist punk artists was the “DIY punk” scene in London. The Slits were a band who rejected a lucrative but deeply sexist opportunity from former Sex Pistols manager Malcolm McClaren to instead create a far looser but more ambitious debut album in Cut. Featuring an album cover of the band covered in mud, and little else, the album’s scratchy, reggae influenced tracks see vocalist Ari Up sardonically mock consumerism, former boyfriends and gender roles, among other things. The Raincoats came from the same scene, with their debut featuring ‘Off Duty Trip’, a harrowing depiction of sexual assault  and a surprisingly faithful cover of The Kinks’ ‘Lola’, one of the best early discussions of gender in popular music. At punk’s radical extreme was also Lydia Lunch of Teenage Jesus and the Jerks, a magnetic vocalist who regularly flaunted norms in the most radical and confrontational way in the band’s highly dissonant and noisy music. Described as “no-wave”, the scene’s focus on experimentation over often any coherent melody was also notable for a number of its leading figures, such as Lunch and The Contortions’, being women. Lunch also herself worked with and inspired Sonic Youth. The no-wave turned alternative rock band connected the feminist punk of the 70’s and 90’s through their bassist and often lead vocalist Kim Gordon. Songs like Kool Thing or Kissability more than hinted at Gordon’s feminist politics, with her raspy vocal style grating in a way that broke off once again from familiar rock stereotypes. Gordon was also hugely influential upon the Riot Girl movement, with Gordon herself forming a band in that style in the short-lived Free Kitten. Riot Girl featured bands like the iconic Bikini Kill but also perhaps most prominently Sleater-Kinney, whose brand of garage-influenced punk managed to bridge the gap into the rock mainstream. Feminist punk is continued today by musicians such as French Vanilla or Porridge Radio from the US and UK respectively highlighting how punk’s promise to rip up conventions certainly was true with regards to feminism.