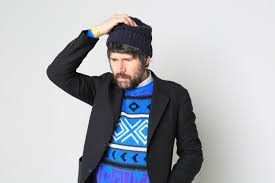 After a career straddling the Britpop and Psychedelic Revival movements with his band Super Furry Animals, North Wales local Gruff Rhys has continued to delve into a huge range of different sounds and cultures, culminating with the curation of the Bethesda-based Ara Deg festival in support of his new album, Pang! Whilst I personally only attended the final night of a 4-day festival that also included art pop singer Aldous Harding and electronic experimenters Bitw along with art exhibitions and more, the final night at Neuadd Ogwen seemed to be the perfect summary of an event that really only an artist like Gruff Rhys could curate coherently. The first of the three acts was the vocalist for psychedelic pop artists The Coral; Bill Ryder Jones. His reverberant, piano-led romantic ballads contrasted with the warm, intimate persona of the singer-songwriter. Promoting a stripped back re-recording of his more dream-pop and psychedelia influenced album Yawn, Jones stripped down the arrangements even further, taking out any ambient textures heard in the album mix to leave just the piano and his fragile yet emotive voice. Something that was also to the credit of the audience surrounding this festival was how even a support act to Gruff Rhys was able to take requests from the audience, highlighting how effectively the festival was curated for both local and international talent.

The beautifully sparse sound of Ryder-Jones stood in contrast however, to the next act, Muzi. Hailing from Durban, South Africa, Muzi’s mixes hip-hop, electronic music and more traditional South African music into a frenetic and catchy blend. There was an irresistible energy and joy to his performances, which straddled between mixes of songs like Earth, Wind and Fire’s September, songs from his 2018 album Afrovision, and recent album Zeno. With Muzi having also produced Pang!, he also contributed backing vocals in the headline set, a performance that combined the percussive energy of Muzi with both the cultural connection in the form of a setlist largely sang in Welsh. The first half of Gruff Rhys’ set was a number of songs from Pang!, an album that melded psychedelia, folk, traditional African music and electronica into a vibrant symbol of political protest. The acoustic guitar playing of Gruff Rhys melded with bongo drums, keyboards and splashes of electric guitar which, alongside the production of Muzi, created an album that sounds simultaneously grounded in place and utterly surreal. The second half, however, saw Gruff Rhys picking songs from his large back catalogue and in a comically impromptu moment singing Gwahoddiad, a traditional Welsh folk song, during the encore. All in all, the final night of Ara Deg can only be described as a beautifully engineered fusion of cultures, musical styles and moods into a gig that was as striking as it was fun and humorous.