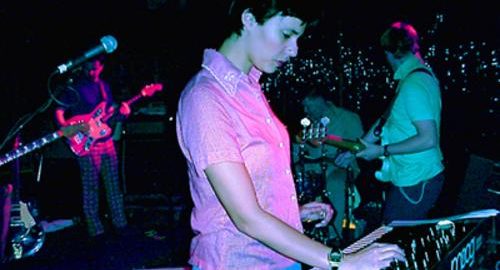 Even within a fairly diverse and eclectic alternative scene of the 1990s in Britain, Stereolab stood out. Mixing a love for the raw and uncompromising attitude of The Velvet Underground with the melody of French pop in their early recordings, within a decade they had blossomed into a band capable of making deceptively complex, vibrant pop. Pretty much the only constants in their career were the sweet bilingual vocals and political lyrics of Laetitia Sadier alongside the guitarwork of Tim Gane, but they had a distinctive yet constantly progressing brand of music because of this. Their comeback tour, coming to the Albert Hall in Manchester was something of a summary of their long career, seamlessly shifting between the jazzy and electronic pop of their later releases and the stripped down, guitar dominated sound of their early music with ease.

Stereolab opened with Come And Play In The Milky Dark and Brakhage, two songs that are amongst their most jazzy and calm. Propelled onwards by the rhythm section of Joe Dilworth and Joe Watson and the wall of instruments in front of keyboardist Julien Gasc, the latter song was particularly excellent, with a jazzy shuffle and a blend of Watson and Sadier’s vocals that is quintessentially Stereolab in its calming bliss. One thing that was notable to the live versions of particularly the more mellow tracks in their repertoire was the far more overt presence of Gane’s thrashed out guitar in the mix. Particular highlights included their most successful songs, French Disko and Ping Pong, both more rock-oriented in their sound and radical in their politics as well as longer jams fit for the live environment in Metronomic Underground or particularly the lengthy closer John Cage Bubblegum. The support act also shouldn’t be forgotten, with Leeds-based punk band Mush touring in support of their first EP Induction Party. Combining noisy, unruly guitar sounds with a passionate and eccentric vocal performance, they showed a lot of promise, with a penchant for both more straightforward shorter tracks alongside the dissonance of a song like Operation Vaken. Stereolab’s triumphant return is one that will undoubtedly please those who lived through their peak but will hopefully inspire a modern interest in a band who combined their pop sensibilities with a huge range of styles, constantly evolving without ever losing their identity.