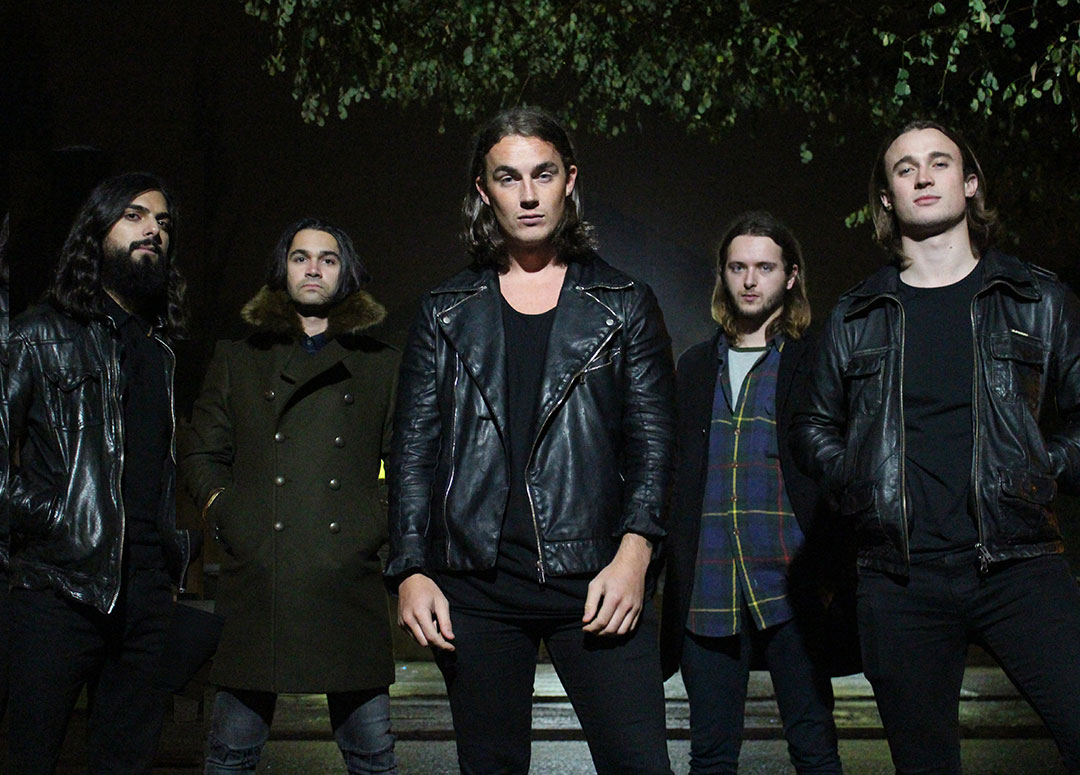 Within the torrent of emergent indie rock in 2016, Alexis Kings are the band injecting a romantic, sun-soaked blues into the sound. Relive that Autumn melancholy through dainty, de-stressing guitar work and memorable, drifting melodies. I spoke to guitarist Sam Privett about the formation of the band, their comparisons to Kings Of Leon and their EP, Squire.

How did Alexis Kings start?

It started with me and the lead singer Brendan at school together. One day, we realised that we both played guitar, he sang and he had a little song written down so we thought we’d play it. From there we just carried on. It was never like: “Oh let’s start a band!” Members have just come in fairly naturally. Our rhythm guitarist is also from the same school, our bassist is from the same area (St. Albans) and our drummer joined through a friend of a friend link.

As you look back on musical development. Usually, a lot of bands start quite fast and slow down a bit. We sounded quite rough and ready. As the years have gone by we’ve developed our songwriting abilities. At the start it was basically a case of if the lead singer had an idea for a chorus we’d just run with it. It was either really poorly recorded or poorly performed because we’d drink too much before the gig, as all bands should do when they start.

Usually, a lot of bands start quite fast and slow down a bit. We sounded quite rough and ready. As the years have gone by we’ve developed our songwriting abilities.

We wrote a song called Brothers which was one of those first tunes where we thought: “Right, this is the standard of our music.” Lyrically it was very smart – Brendan really started to think about the lyrics – and musically it had great guitar riffs. It’s a song that we still play today. BBC Introducing love it and all fans love it.

How would you describe your sound to someone now with your EP Squire?

On this EP especially, it’s almost four different bands in one EP but keeping an Alexis Kings style to it. I guess you could call it singalong. Every chorus we’ve written in this EP, at some stage, I’ve had stuck in my head. And people come up to us and say: “We just have your song stuck in our head!” Chorus wise it’s definitely much more melodic and anthemic. There are nicer guitar sounds that are more mature and thought through. And a little less rushed. All four of them have got their own sounds to them.

The whole thing with this EP is that there hasn’t really been an intention to it. Me and Brendan went away for six weeks in Norfolk to get away and just write songs. It came off the back of Summer in August/September time so I guess it was just Summer within our bones still and we were just reminiscing over it. A lot of people have said they are Summery type songs. But there was no intention for it. It just came across so easy.

A lot of bands want to seem ‘experimental’ but you seem to embrace the singalong nature of your music?

The songs that we like the most are the ones that are stuck in my head a couple days later because the melodies are so simple and so brilliant. Bands like Oasis that we’ve grown up with epitomise all that simplicity and singalong. At the end of the day, we write songs based off what we want to hear.

The songs that we like the most are the ones that are stuck in my head a couple days later because the melodies are so simple and so brilliant.

The minute you start chasing something else or you want to be a certain style, you start losing sight of when you write a tune where you get four guys or five guys in a room and seeing what comes out. The new material that we’ve got now that we’re about to go into the studio with has come from all of us in the practice room playing what sounds good to us. There’s no real: “We’re going to write a song that sounds like this.” If you don’t enjoy what you play then the songs you write won’t be as good as they can be. We write for our own personal enjoyment. That seems to be catching on with lots of people as well. Because the second best thing to writing a good song is sharing it.

A lot of people compare you to Kings Of Leon – how do you feel about that?

We’ve been compared to Kings Of Leon since we’ve started in some way or another. Especially on Squire, loads of people say they can hear Kings Of Leon sounds on it. Me and Brendan have had lots of conversations about it and we just don’t understand it, especially with the new stuff. People will hear things in songs that will remind them of a certain sound, that doesn’t necessarily mean we’re emulating Kings Of Leon. I also think that people use Kings Of Leon as a base mark for a guitar indie band; it’s either Kings Of Leon or Arctic Monkeys. At the same time though, I love Kings Of Leon. It’s what I’ve listened to growing up. I’ve loved what they’ve done. So if you want to call it Kings Of Leon – cracking. As long as you’re listening to it and enjoying it, that’s all that matters.

On your EP, Squire, did it come out the way you wanted?

You listen to it in the studio so many times mixing it, you end up losing the original sound that you had in your head. Then having gone away, you don’t listen to the tracks for a while and you come back to it, you realise the songs come across really well. We can say it’s a great sounding EP.

A guy called Chris West produced it and it sounds really big. We were lucky to get him. He knows his stuff, he’s done it for that many years. It was great having someone there who’s been there and done it with so many bands and so many albums. He wouldn’t change the songs in any way, he would just say: “Maybe try this instead?” Or he’d make sure the guitar sounds were as they should be. As a producer you’ve got to be careful. You’re dealing with people who’ve written these songs with an idea in their head. So you’ve got to make sure you find a middle ground. We had a nice working relationship with him (Chris West) though. He was open to giving ideas and equally open to trusting in the fact that we’ve written these songs and we have an idea of how it should sound in the end.

Happy with the reaction to the EP?

Yeah. Can’t complain. It’s been going mad really, especially on Spotify. Getting on the viral chart is up there in one of the best moments. But also just seeing people at gigs that you don’t know but who know your tunes, getting messages on Facebook and seeing the reaction has been amazing. What’s nice is that Squire kicked off to a different level on Spotify, but as a result, tracks like Strawberry Blonde are coming through and people are loving it. Me and Brendan always said that Strawberry Blonde would be the one that will take its time but eventually would be everyone’s favourite. People are starting to react to the other songs on the EP other than Squire which is nice to see.

We knew Squire was going to be great. Seeing it take off and get as much attention as it has got has been brilliant. A lot of people love it because it catches you straight away with that guitar line and bass line together. The minute we finished the demo for Squire we knew it was a great, great song. We knew it was the best song we’d ever written to that point.

The minute we finished the demo for Squire we knew it was a great, great song. We knew it was the best song we’d ever written to that point.

The others are slow burners, but there’s people still coming up to us saying: “Morning Diana is our favourite.” There’s also a lot of love for Chivalry. We’d love to see them in the 100,000s as well but we’re very appreciative of the support we’ve received.

On the music video for the title track Squire – was it fun filming it?

We went to Brugge, Antwerp, Amsterdam, and Rotterdam in three days. We hired a van on Friday morning and got back at 2AM on Monday morning. The video was always going to be a summer road trip so we wanted to capture that as much as possible. We hired the van out, got all the equipment out there and just go and do shots in as many random places as we can.

We had a mishap the second night we were in Amsterdam. When you turn up in this big van and you’re lugging music equipment in and out then you’re going to attract some attention. We went into the B&B to have a shower and some food. When we came back out to do some more filming, we saw glass on the floor. Someone had bricked the window. It was a heart in the mouth moment. Luckily, they didn’t steal anything but the drivers manual but it did make the drive back home colder.

Having fun playing your EP live?

The response we’ve had from the EP has been going into our live shows with the audience being a lot more animated with our tunes. We had a busy gigging period for 3 months or so just after we released it and every gig we did we were packing out places. People you don’t know asking for selfies as well which is very weird.

Every gig we’ve done, when we play Squire, we look up and there’s a sea of people on other people’s shoulders belting the tune back to you. That’s what you write music for. When you’re playing live and there’s people there who’ve memorised those words and they’re singing it back because they love it. Also because they’re very drunk. But it’s been a lot of fun.

Every gig we’ve done, when we play Squire, we look up and there’s a sea of people on other people’s shoulders belting the tune back to you. That’s what you write music for.

We’ve got a drummer Fabio who hits those drums hard and he flings his long hair about. A lot of the energy comes from Fabio going for it. Brendan is the frontman of the band and he creates some crowd involvement. It’s a good atmosphere when we play our gigs. It normally comes away with a lot of sweaty people in the crowd. We don’t get too focused on trying to play every note perfectly, we make sure we enjoy it. It’s always nice to come off stage with a happy audience and a happy band.