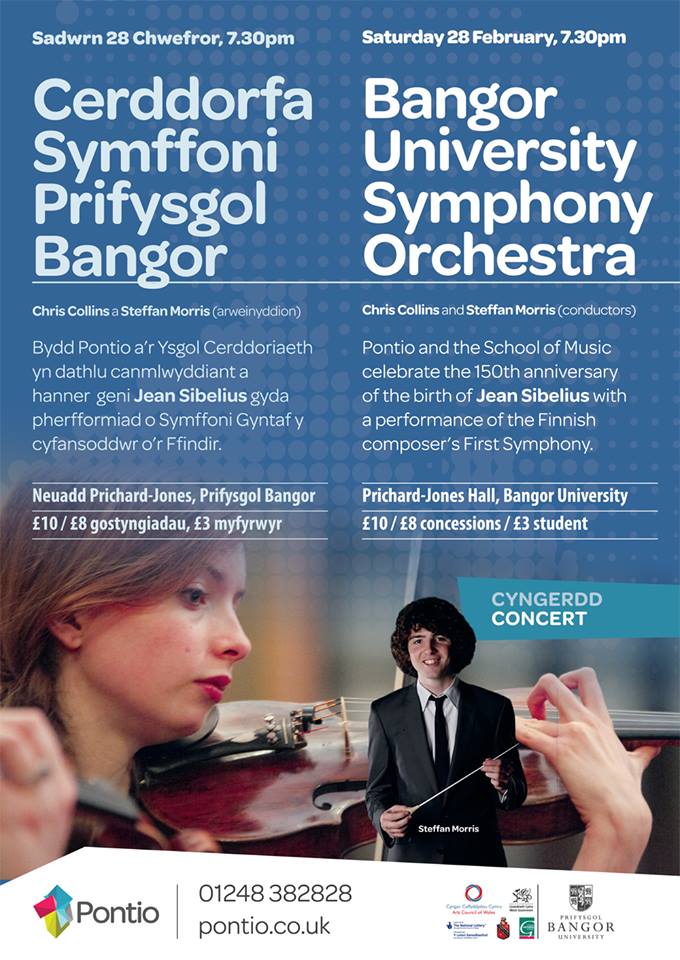 The Pritchard-Jones Hall is a big room. It’s difficult to appreciate just how big with eyes alone; ears are better. An orchestra playing Schubert, Mathias and Sibelius should do. What became apparent on Saturday night, though, was that not even the full force of the Bangor University Symphony Orchestra could fill the space. This is in no way a comment on their effort, which was lustre (if that be the opposite of lacklustre), but on the Hall, which rendered loud music mezzo-forte and soft music muffled, the contrast a middle grey and the drama diminished. Roll on Pontio!

Against this unaccommodating acoustic battled the young and intrepid Steffan Morris, who conducted Schubert’s Unfinished Symphony. The strings rumbled and the woodwinds tooted the opening theme with definition but without expression. However, Morris and his brass emboldened the rest of the orchestra, and before long the notes were flying with fervour.

Suitably soft strings serenaded us at the start of the second movement, though some wobbly woodwind in terms of tuning and rhythm ruined sections in between as well as the final note. This was a satisfactory rendition though a little underwhelming.

My fellow audience members, I’m happy to say, were rather more glowing in their remarks. “It was really engaging,” said Maddie Towell, “and it’s good to see a fresh face on the podium in Stephen Morris.” Tom Lazell agreed: “It was incredible! Schubert portrayed in this piece the pain he was experiencing in his personal life, and the orchestra performed it in the way I believe he would have wanted.”

William Mathias’ Flute Concerto closed the first half. The soloist was Elin Roberts, a Master of Performance student from Caernarfon, and her confident, controlled and crisp playing was the highlight of the night, even if the the concerto itself wasn’t. One of the last works penned by the former Head of Music here at Bangor University before his death in 1992, Mathias’ concerto contained many a mood and motif in the first and second movements that could only be described as “nice” but that were somehow elevated by Roberts to “actually quite interesting.”

Fortunately, the third and final movement stood out for its vivid evocations of a June afternoon in Wales: a dance and a skip; a stroll arm in arm through the garden; tea and buttered bara brith; birds in the boughs above; Mathias composing, pen in hand, below. The orchestra, reduced to strings only, played competently under the baton of Chris Collins, who now occupies Mathias’ former position at the University. It was Elin Roberts who stole the show, though, with a climax that was thrilling, clever and clear. Tom Lazell concurred: “Elin performed the concerto beautifully and her relationship with the orchestra was clearly close.”

Sibelius’s First Symphony occupied the remainder of the programme. The woodwind section shone throughout for two reasons: the clarinet opening was serene and haunting, perfectly expressing the Finnish feeling of ylimaallinen, and it was pure bliss to hear this instrument and its player again whenever it and she reappeared; the exact opposite can be said for the oboe, whose out-of-tune warbles worried the conductor and orchestra alike. In fact, after the initial tuning before the symphony began, two subsequent re-tuning were ordered, both in vain. This and the equally deviant horns – an all too frequent feature of amateur orchestras – rather soured several sections of the symphony.

Strident strings and thunderous timpani-playing in the third movement made this brilliant bit of writing come alive, and it proved the most enjoyable and entertaining passage of music of the evening. Out-of-tune passages for oboe and clarinet marred the start of the finale but, the awry pizzicato notes at the very end notwithstanding, the BUSO redeemed themselves with a powerful climax of crystalline top Bs on the first violins and a bolstering boutade from the brass.