REVIEW: The God of Carnage (BEDS) 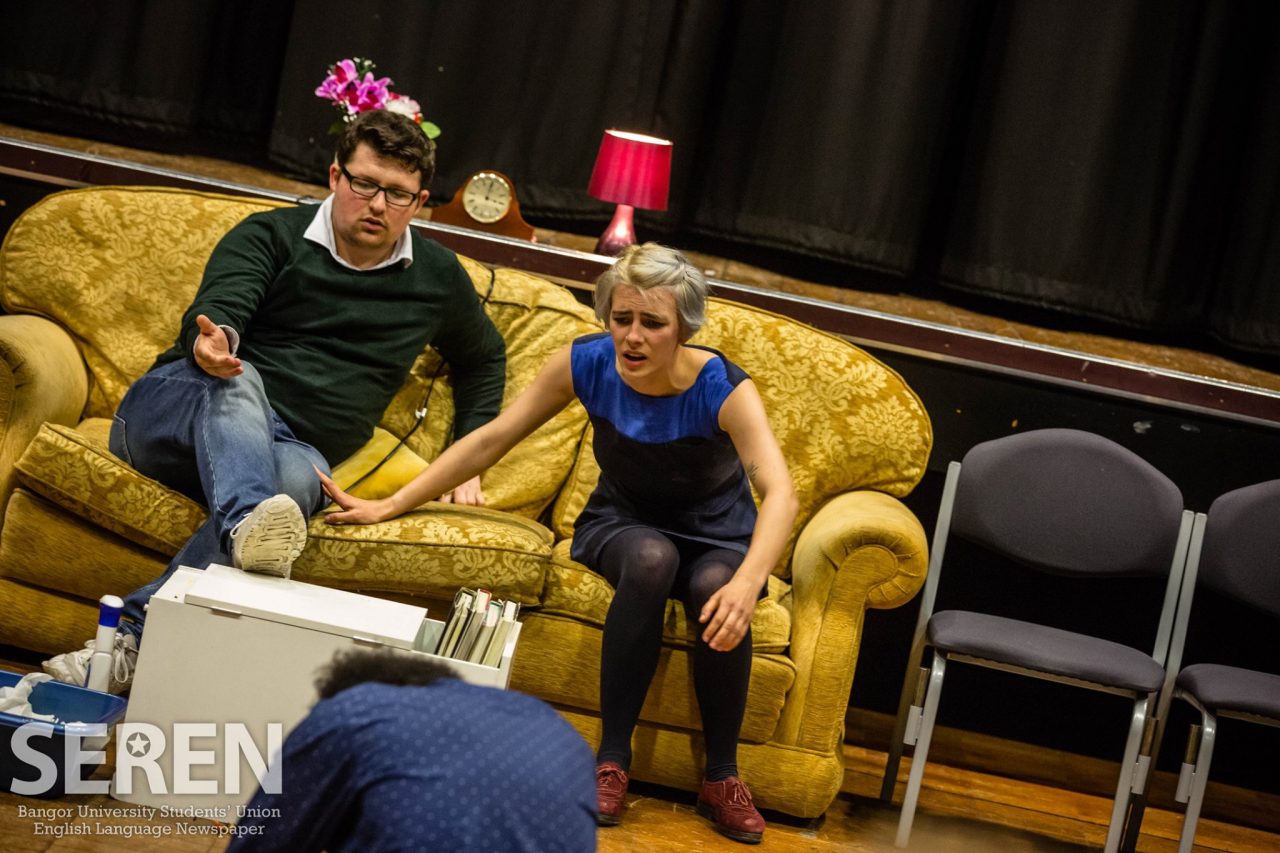 This semester has been the most inventive yet for Bangor’s English Drama Society, with all three plays in their lineup breaking out from the usual confines of the John Phillips Theatre’s proscenium staging to create a diverse array of theatre for the decent crowds they’ve drawn. The culmination of this programme is the noughties black comedy The God of Carnage, a translation of French playwright Yasmina Reza’s Le Dieu du Carnage – a one-act burst of middle class couples behaving badly, as Veronica and Michael (Roseanna Lovell and Lewis Wilson) welcome into their home Annette and Alan (Mae Bernard and Elliott Aboagye) after their kids get into a fight down the local park. The two pairs of parents are determined to resolve the issue like grown ups, and what soon bubbles to the surface – and then explodes – is an ego-driven riot of culture clashes, fragile masculinity and alarmingly-coloured vomit. 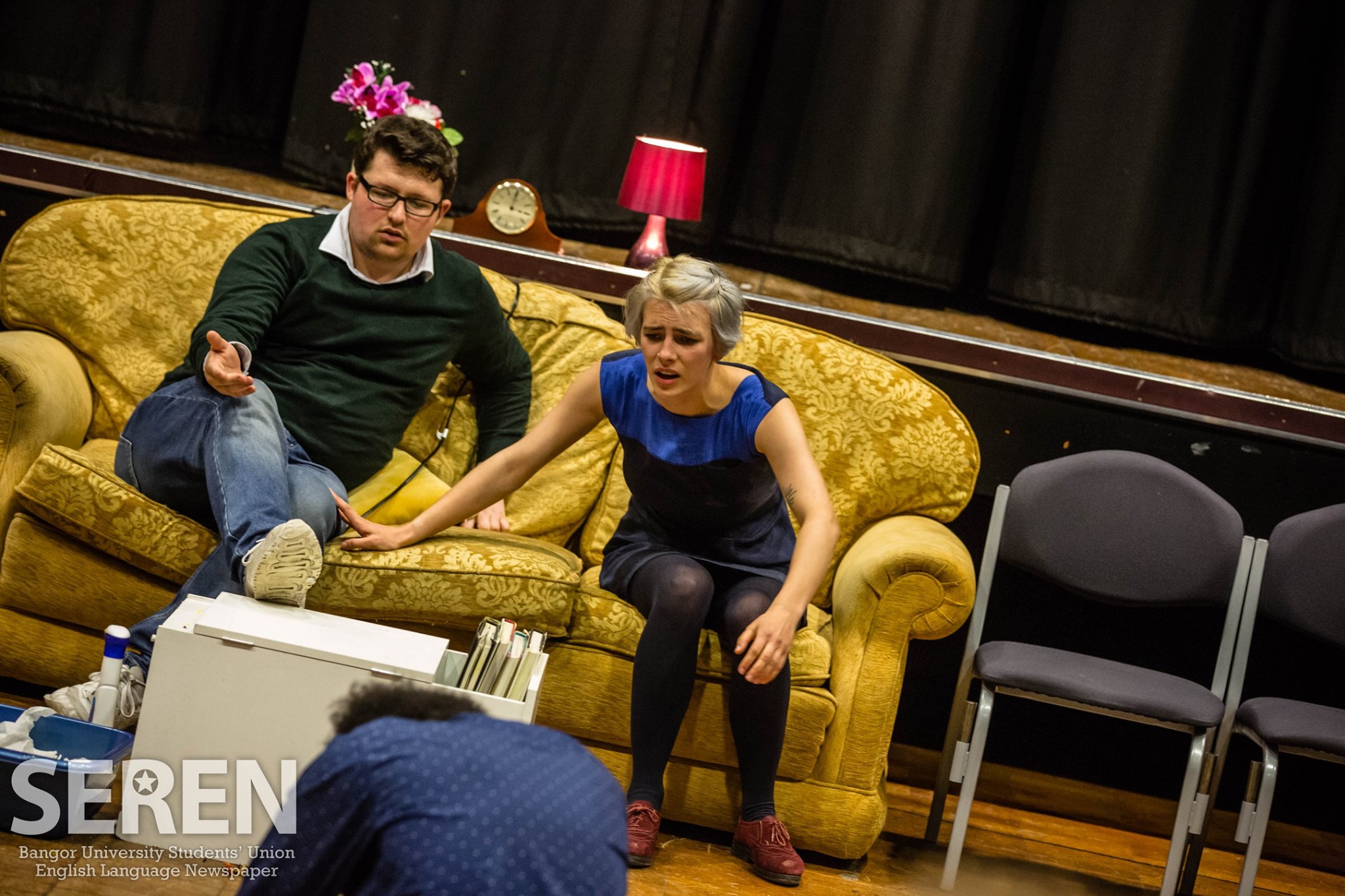 The text itself is a smart choice for a student production: Veronica and Michael’s living room is simple to create in a theatre round performance space in the middle of JP Theatre and needs only four actors and simple stage tech (managed by Ed Gilligan-Davis). But more importantly, The God of Carnage is not the usual GCSE-syllabus fare a Uni drama soc might churn out – and is something of a cool discovery for an audience and society that might not have otherwise heard of the play. There are interesting similarities with BEDS’ 2016 staging of Who’s Afraid of Virginia Woolf in Pontio’s studio theatre – another intense chamber piece of two dysfunctional couples – but be in no doubt, there are moments in Carnage so outlandish it makes Woolf look like a vicar’s tea party.

But this show is so much more than a succession of shocks: the key ingredient is a well-chosen cast of four performers who fill the space with sky-high energy and keep the audience buzzing with fantastic skill. In different hands, the play could have become an unvaried shouting match, but each of these actors has a natural understanding of dialogue and pace, and of exactly how far to ad lib and play around, so the whole hour-and-a-half is hugely engaging stuff. Proper effort has clearly been put into creating these big-personality characters: Roseanna Lovell strides and prickles full of artisan entitlement as “art history museum” exec Veronica, and Lovell’s ability to make their character so understandable and real you could meet her in any branch of Waitrose (or in some staffrooms at this Uni!) adds to their charisma, boosted by a great mercurial and commanding stage presence.

And a commanding stage presence is not an easy thing to have in such a heady mix that includes the two rowdy dads, Alan and Michael. Elliott Aboagye and Lewis Wilson will be familiar and much-loved faces to regular BEDS-goers (and regular Academi-goers) and the pair make fantastic disagreeable slobs here. Much of Wilson’s performance involves blurting out exasperation – which he attacks with precision and gusto – but in other moments, too, of finding common warmth with another character, or becoming more introspective, his acting also shines. His chemistry with Aboagye is certainly tremendous, as the character of Alan is similarly well crafted. A sleazy lawyer, forever cutting off the action to remonstrate with ‘Maurice’ down the phone, Aboagye’s Alan is a perfect creation, and proves what a talented actor he is, handling verbal, physical and interpersonal comedy (and challengingly enormous phone monologues) with flair. 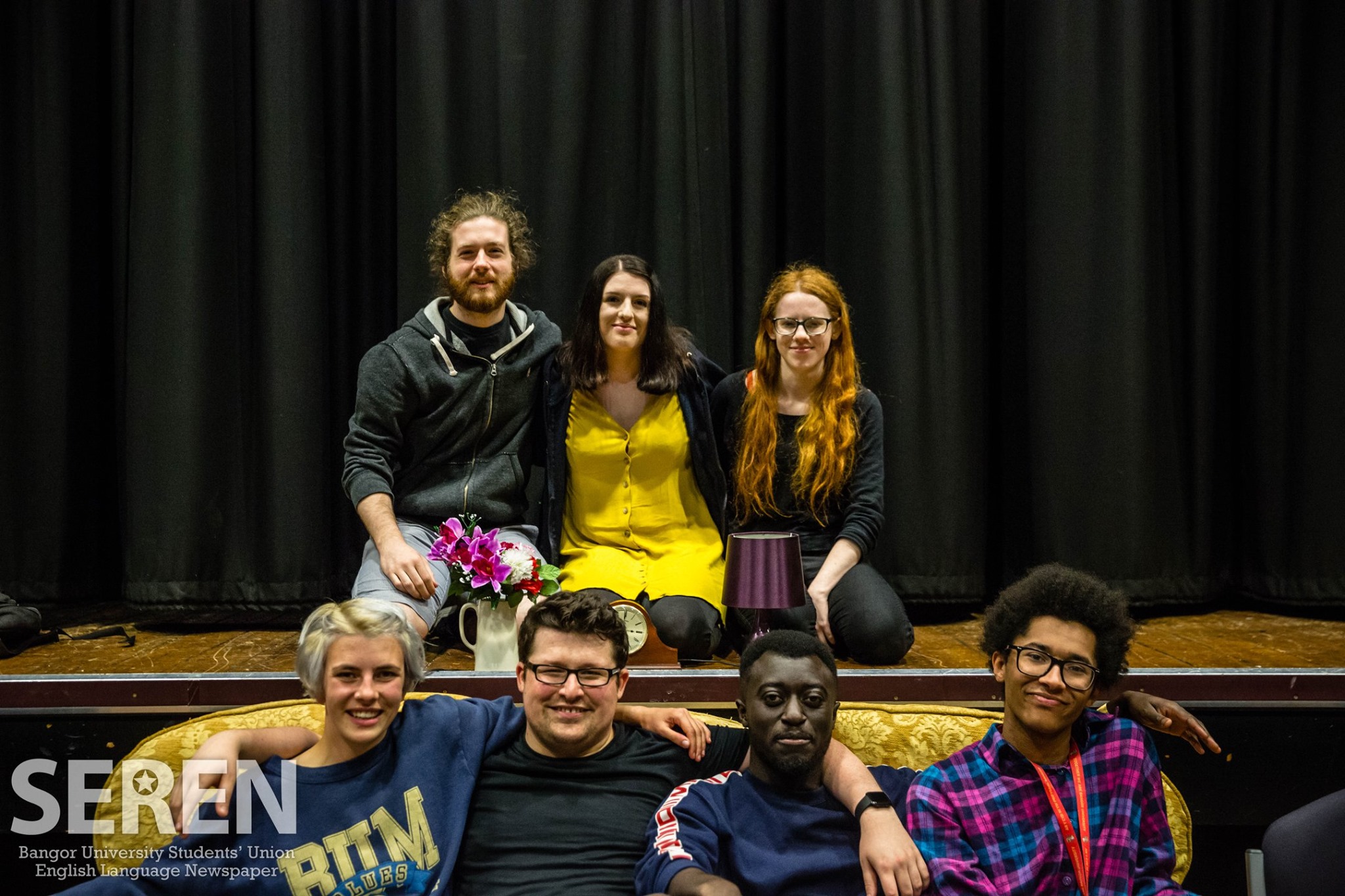 In this cacophony of ten-tonne egos, it then becomes intriguing to add Mae Bernard’s quieter and well-meaning Annette, perching on chairs and cradling her head in her hands. Because Annette begins the play somewhat kinder and more straightforward than the others, it is her descent into drunken screaming, puking and slurring that is perhaps the most meaningful, and Bernard conveys her long-building frustration well. Although Annette’s actions are intended to speak loudest, she does seem the most underused of Reza’s characters, and the script could have given a bit more of a chance to get to know Annette better.

What all the Carnage characters share is a final destination of bigotry and despair. The play ends with the shocks more potent than vomit – Veronica and Michael’s racism, Alan’s sexism and Annette’s homophobia – still ringing. The casting of the couples gives a fresh context to these prejudices, and the impact of these offensive outbursts is played convincingly.

Perhaps The God of Carnage is designed to leave a bitter taste in the mouth, but what it certainly supplies is a cracking night of entertainment that has every audience member laughing from the belly and eager for more and more. The show is a fine achievement, not least on the part of directors Meg Mason and Briony Collins, and further proves how exciting and varied the performance scene at Bangor continues to be.
This large helping of carnage provides the exam-season tonic needed to see the year out with a bang. And a slap. And a puke. And a simply glorious amount of ad-libbed swearing.