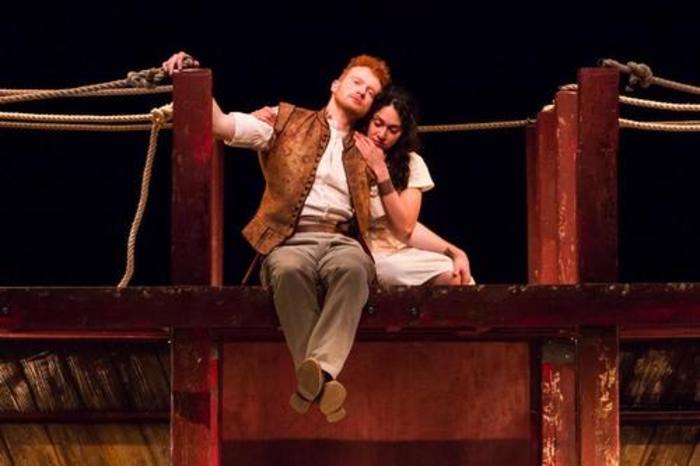 I can’t say that I expected to see the most famous ‘star-cross’d’ lovers kill themselves then get up for a song and dance immediately afterwards. It was however an entertaining conclusion to Shakespeare’s most famous tragic love story.

Having only bought the tickets for this touring production of Romeo and Juliet as a means to fill an evening over the Easter break, I can’t say I was particularly enthusiastic about going. I was in fact pleasantly surprised at how much I enjoyed this production as it presented a successful balance of comedic and tragic elements.

Having had the privilege to experience productions in Shakespeare’s Globe and armed with the knowledge that this particular show was a touring production from the Globe itself, my expectations were high. I was thankfully not disappointed.

This stripped-down version of the play exaggerates the importance of successfully engaging the audience. The casting for this play was exceptional as each actor embraced their roles with convincing enthusiasm. The performance consisted of only eight actors which meant a number of them were required to play multiple roles. This was extremely commendable in the demanding character changes of Tom Kanji as Friar Lawrence and Benvolio.

In particular Kanji’s interpretation of a severely hungover Benvolio following the Capulet party produced a highly comical element to the play. Similarly, Steffan Donnelly’s interpretations of the prince and Mercutio were genius as he seemed born to play the teasing and charismatic role of Mercutio. Additionally, the two lead roles are beautifully portrayed by Samuel Valentine and Cassie Layton as the on-stage chemistry is easily identified between the two.

The production exhibited a typical Elizabethan-style booth stage and minimal props. Even the costumes were stripped back as the male performers were frequently topless and Juliet looked as if she was wearing her grandmother’s nighty. The bare chests of the male actors became more of a distraction… and not really for the right reasons. The uncomfortably slender frame of Donnelly as Mercutio made Valentine’s Romeo look comically short and podgy. An image that one wouldn’t normally associate with the characterisation of Romeo.

It was also confusing as to why all of the actors were covered in fake tattoos. At first I thought it was a clever way to distinguish between the Montagues and the Capulets, however this was not the case as almost all the characters shared the image of a swallow somewhere on their bodies. Therefore my one criticism would be that something so visually obvious within the production should have been clearly explained as I was continually distracted by trying to understand this costume choice.

I wholeheartedly recommend watching any Shakespeare adaptation performed by the Globe Theatre as you are guaranteed quality in the cast and authenticity of the set. This particular performance of Romeo and Juliet is touring from 27th April to 8th May and is a must-see for any theatre or literature lover.