Boobies Through The Ages 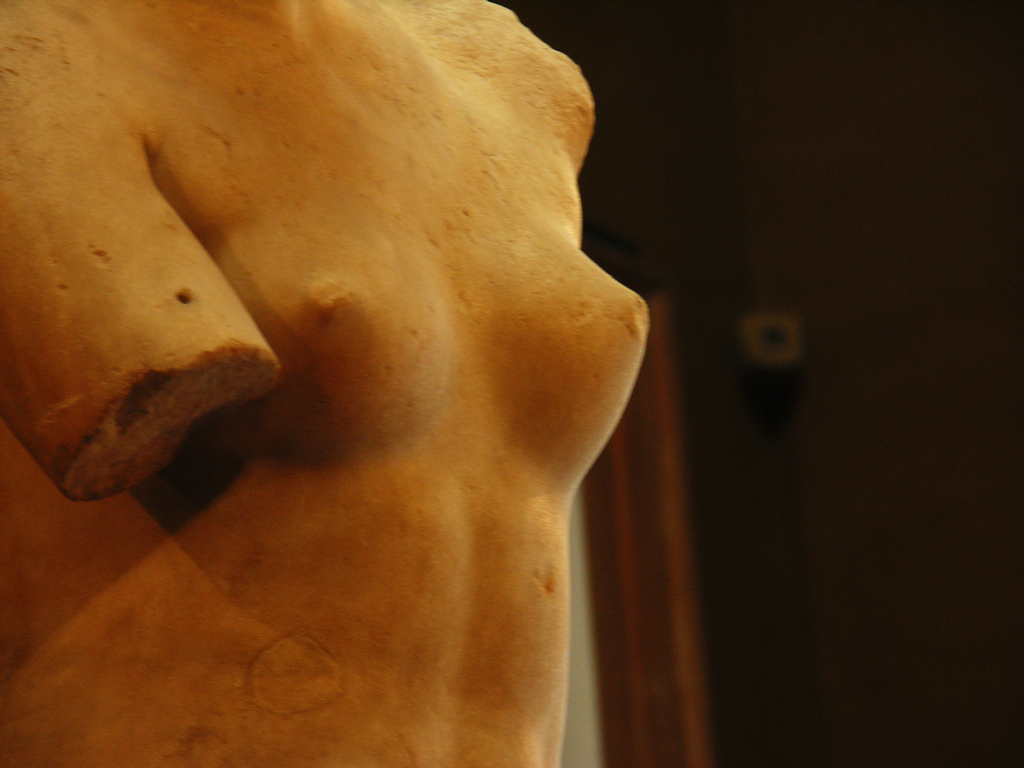 Humans are obsessed with boobs. It’s not specific to any labels you want to stick in the spectra of gender and sexual orientation, and, as we can see here, it’s always been the case.

Named the ‘Venus of Willendorf’, this sculpture of the female form was found in 1908 near Willendorf in Austria. Carved from oolitic limestone and coloured with red ochre, the piece has been dated all the way back to 28,000 BC.

Her full form and voluptuousness has been understood to represent fertility and procreation. Another group of thought, however, is that it acted as a good luck charm. Only 110mm high, it is possible that hunters may have carried the Venus for success, but also to remind them of the women they were to return to. The lack of facial features suggests that it was symbolic instead of being a depiction of a person.

Was it a deity, part of a religious construction, and earth goddess, or a sign of the esteem women may have held in former societies due to their childbearing abilities? All we know for sure is that she’d struggle to find a comfortable bikini top this summer.

Several thousand years later, Aphrodite of Melos, better know as the Venus de Milo, was created. Made sometime between 130 and 150 BC, it is interesting that this depiction of the Greek God of love was originally thought to be Venus in 1820 when it was discovered.

It is this name that the Milo is better known by, due to some great propaganda back in France two-hundred years ago. Having said that, this mysterious sculpture could also be Artemis, a Danaid, or the sea-goddess Amphitrite.

However, many have refuted these other possible identities, pointing out her feminine curves and arguing there is no denying she is the ruler of love.

The medieval period loves the mix of intricate, rich patterns and the downright weird. This image is from part of a Gloss, which is the additional images and words on a medieval text. It was added in an attempt to further explain the message of the text.

For example, the Bible. Originally written in Latin, massive line breaks allowed others to add translations below the line in French and then English.

Here, in an illustration of the birth of Caesar created around 1400, the scene does not glorify birth, but tries to address the pain in child-birth.

Cesarean sections were fatal for the mother but, often, so was childbirth. At this time, the church began to be encourage midwives to cut out living infants once their mothers died, so they could be baptised before they died.

Myths surrounding child bearing included the idea that the womb was divided into sacks, and, depending on which sack the sperm landed in, you got a boy or a girl. If it landed in two sacks, you got twins!

Peter Paul Rubens painted this Venus and Adonis in mid-1630, around a decade prior to the English Civil War.

Here is Venus with her son, Cupid, trying to entice the very young and very handsome Adonis. Despite throwing herself at him to little avail, the Goddess of love is determined to win him round.

In this depiction of Ovid’s Metamorphoses, the effort seems to be paying off slightly, though he still has a boar to catch.

Ruben’s trademark has got to be his detail to the female form, which he always ensures is fuller for the long, smooth curves that make his work so pleasing and balanced for the eye.

This is St Elizabeth of Hungary’s Great Act of Renunciation, painted in 1891 by Phillip Calderon. After her husband’s death in 1227, Elizabeth entered a covenant.

Torn between the physical world and servitude to God, she went through spiritual crises as she was pressured to renounce the world and her own children by a domineering monk pressed her. Here we see her finally submitting her life, her motherhood, and her womanhood to the covenant.

The frailty and beauty of the naked female form shines brightly in the solemn surroundings. Her pert boobies suggest youthfulness, which is tied to innocence. Despite using an angel that does not display a lady’s curviest bits, this painting still very much embraces the soft lines of womanhood.

I’m sure she was a great nun.

Painting this in 1907 in New York, Picasso places the woman and the depiction of the woman side by side. Les Demoiselles d’Avignon was crafted right at the beginning of his African-influenced period (shortly before the bane of GCSE art students: Cubism).

The faces of the figures on the right resemble tribal masks and are heavily influenced by African art. During the early 1900s, Parisian artists developed Primitivism, completely enamoured with the power of the striking masks and art of Africa.

With nude tones, the painting is full of flesh and joy for the female form, and so Picasso uses the soft, naked body of the female to delve into a new, quite aggressive, powerful artistic style. An interesting mix of boobies there I think.