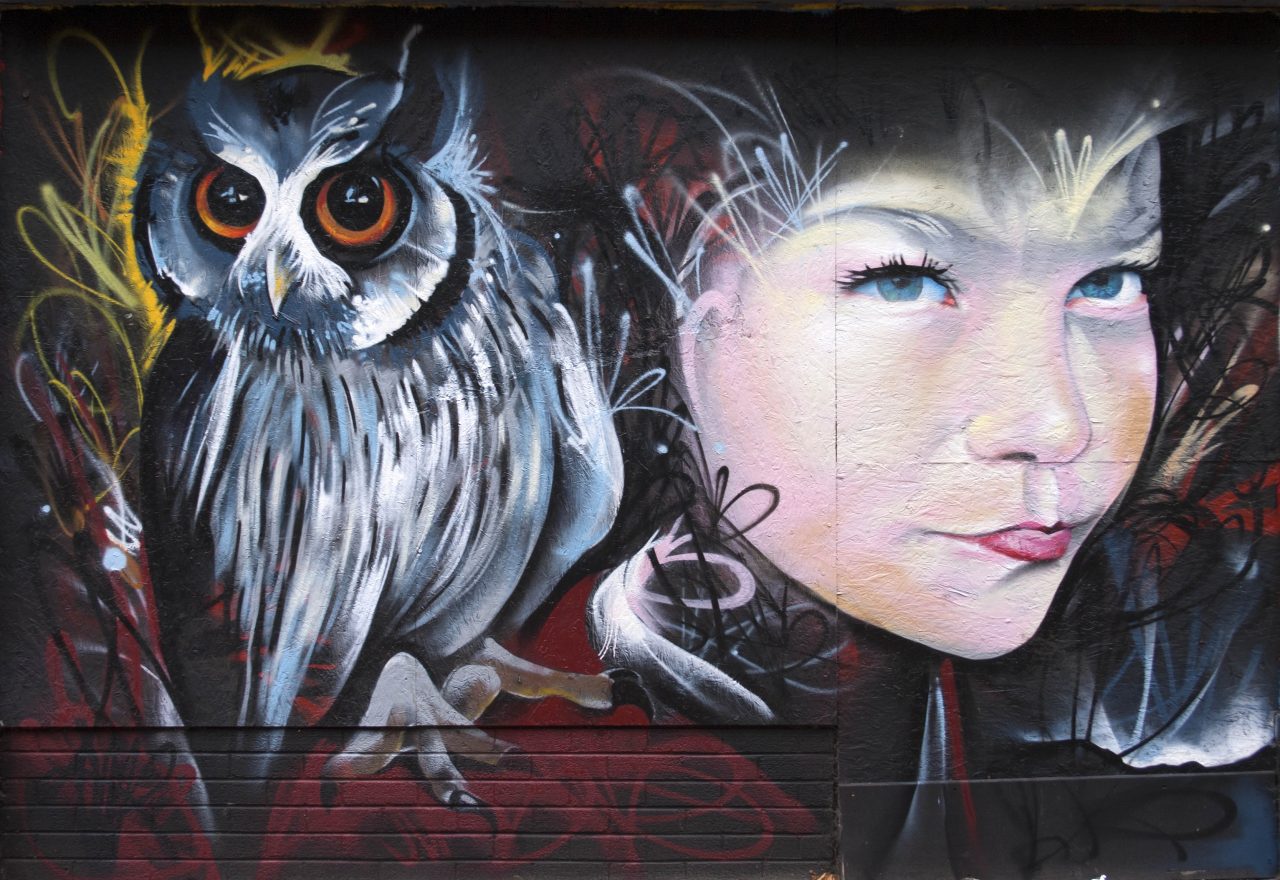 It’s all graffiti to me. A big tag written across a wall or a really talented piece of work or stencil. It’s not that I believe it is all just vandalism; it’s that I think it is all Street Art. No matter how unimaginative or rude, it all has a place in our cities because it reflects our culture.

Belfast city is an excellent example of the importance of each mark on the landscape of our home streets. Back in September, an event called Culture Night Belfast popped up for one evening across the whole city. Dancers, actors, and musicians performed, and different activities were held, such as fencing and kid-friendly games. And then, amongst all this family-fun, there were highly talented street artists.

Their work imprints their opinion onto the streets themselves, turning their message into an interactive one. Everyone and anyone can get involved. This is evidenced by a fascinating blog which records and posts the ever-changing and ever-blooming paint in Belfast.  Flicking through the archives of Extramural Activity, Belfast’s identity begins to form in front of you. There is no one opinion of any city, let alone a place with such an active background as this one.

The most exciting thing about street art is just how many people it gives a voice to. It allows people to place their mark on their home, in any way they are able to, whether through slogans or complex works of art or just their name. Each piece is a part of how we perceive Belfast. During September’s CNB, the image of a young girl with an owl on her shoulder appeared and, over the months that followed, it changed as people added to it, carefully affecting the whole mood of the picture itself.

Like with this girl, others can come along to add to the walls or they can wipe over it altogether. A man stencilled onto a red door was pulling at the pin of his head, until it was replaced with a grenade. He’s since been painted over with Bruce Lee in a Reservoir Dogs style suit. A bizarre change? The old military connotations that hung around Belfast for the older generation are replaced by cinematic influenced creations. The well-worn image of a man blowing his mind is fairly common to us.

Replacing it with the spliced movie franchise, we see the streets bringing themselves up to date in an attempt to catch the eye of a passer-by. The importance in this particular piece of work is not necessarily what it is actually of, but the image that it is covering. It tells the streets that we no longer care about the pin-head, it doesn’t gain our attention anymore. So put Bruce Lee in a suit. 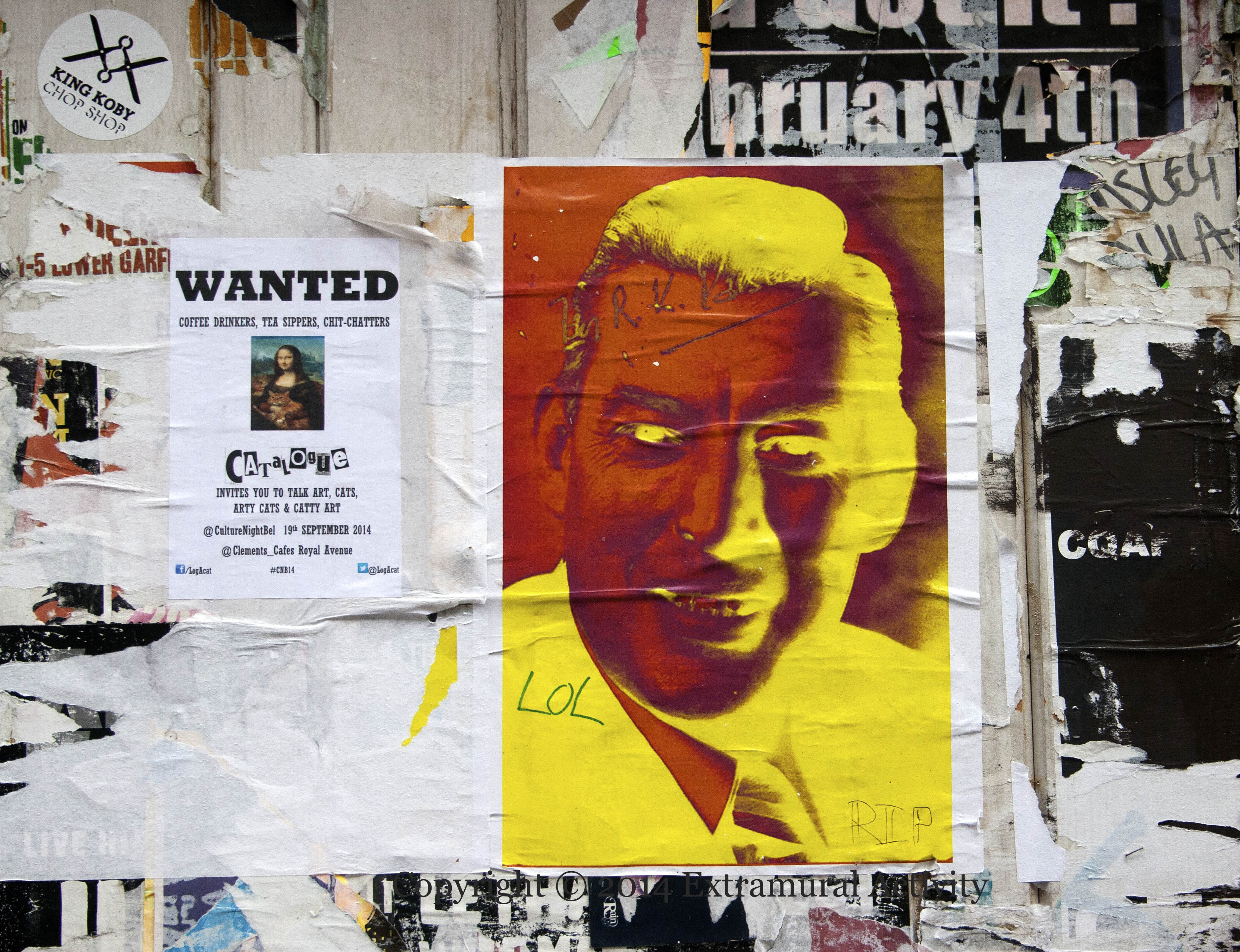 With this in mind, I come to a photograph of additions made to someone’s work. A flyer of Revd. Ian Paisley was hung in the city centre around the time of his death last year.  He lived a long and controversial life, so it is not surprising that he is literally demonised on the poster. Since Street Art can only exist in a public space, it will always be edited, covered and replaced. The additions to Paisley’s face were an interesting combination of ‘LOL’ and ‘RIP.’ The man who led the loyalist opposition to Catholic Civil rights is also blamed by many for the startup of the 1960s troubles.

“He was strong and he never looked back. He always dealt with what was in front of him” explains one Catholic Ulsterman, whose family in the early 60s were supported by Paisley in an application for an extension. Despite being in a deprived Catholic area in Protestant Belfast, they managed to get permission for an indoor bathroom. He was a “difficult politician” the Ulsterman continued, “but he stood for everyone.” There is no one opinion of Revd. Paisley, and there is not just one voice trying to speak up. In writing on top of someone else’s creation, just a flyer in the street has become a way to demonstrate the complexities and different opinions of civilians about politics, character, and daily life.

So, regardless of whether you like it or not – call it art or vandalism – it’s there and it’s saying a lot more about Belfast, Birmingham, or Bangor than we would have thought.