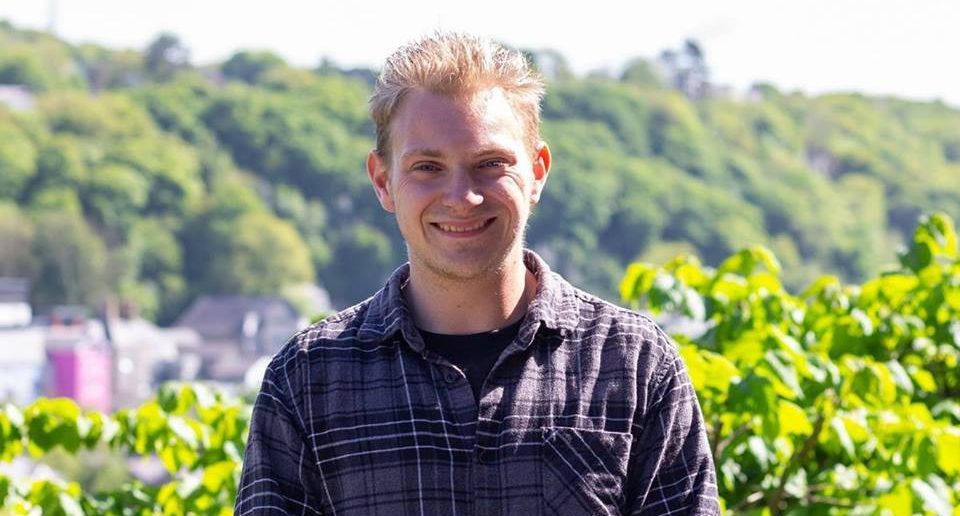 That’s it then…after two years working at Undeb Bangor, I’ve reached my final week, and will officially complete my term as President at 5pm on Friday 26th June. As when coming to an end of any chapter of your life, it is natural to go through a period of reflection. That is certainly the case for me, as I am also coming to the end of five years living in Bangor, and five years of association with Bangor University – initially as a student for three years, followed by my two years at Undeb Bangor.

When I think back to my first day of working at Undeb Bangor, back in June 2018, I am reminded of just how different everything now seems to be. Clearly, Covid-19 contributes to that, but there are many more reasons besides. It feels like Bangor University is a different institution to what it was two years ago (not a long time, considering it is approaching 140 years of existence), due to new leadership and new priorities. It is remarkable just how much change has been condensed into those two years – change that I have seen first-hand and contributed towards. 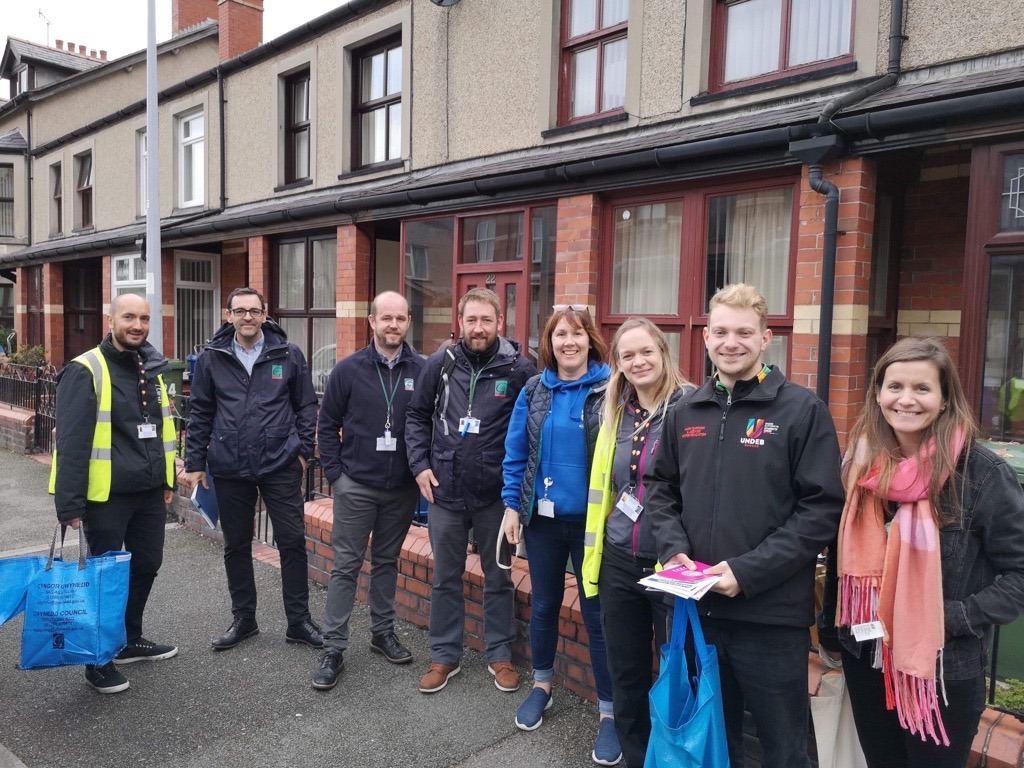 Back in December 2018 (a week or so before the Christmas holidays), the university dropped the bombshell that significant financial savings had to be made, signalling a further restructuring exercise; it followed a restructure in the previous academic year, prior to my time at Undeb Bangor.

This news shifted our priorities, almost overnight, as it became clear just how much work this would require, particularly from our Student Voice (academic representation) department. The scale of the restructuring exercise quickly became apparent after we got hold of the Business Cases for Change (the documents stating the proposed changes), which included the proposal of at least one subject area being discontinued.

We quickly understood how we would have to tread a fine line between working constructively with university departments and personnel, and supporting students who, understandably, felt angry and unclear as to what it all meant.

We, I believe, handled the situation in a measured and productive manner, and I’m proud of what we achieved. We pushed the university into sharing the Business Cases with students, emphasising the importance of openness and transparency; something university management are now fully aware of. Subsequently, we arranged meetings with students who were impacted by the proposals to document their main concerns, which formed an extensive report.

This 52-page report symbolised a change in how the university, and students, viewed Undeb Bangor. It showed them that besides facilitating the fun side of the student experience, through sports clubs and societies, we are also here to meaningfully represent students through difficult and testing situations.

It meant that we started to be taken more seriously, through to directly influencing the eventual restructure. We ended up significantly improving our position in the 2019 National Student Survey, becoming the top student union in Wales for adequately representing students’ academic views and interests. I am sure that this was mainly due to our work responding to the Business Cases. This work also had long-term effects. It consolidated our working relationship with different areas of the university and we are now naturally consulted over any major changes, as has been the case throughout the Covid-19 situation.

One of the predominant criticisms of student unions across the country, Undeb Bangor included, is that students do not know what they do or what their point is. One of the reasons is that the work of a student union is so diverse that it is difficult to succinctly summarise it to people. When something cannot easily be explained, apathy can quickly be found.

Having said that, student unions do not always help themselves. When I started at Undeb Bangor, there was a definite culture of the work of a Sabbatical Officer largely being office-based. In some ways, this is due to 15 years of rapid digital developments, which led people to believe that social media was the answer to all ‘student engagement’ – why leave the office when everything can be shared on Facebook and Instagram? The trouble is, it is not as simple as sharing messages online, and students have quite rightly told us that. ‘’I never see them, so have no idea what they do’’ is a phrase that I can guarantee all student unions will have heard when asking for feedback.

I have always been clear that face-to-face interaction is crucial, and that time must be put aside for it. On becoming President, I widened this out to be an Undeb Bangor priority. This has led to a ‘pop-up union’ programme, involving us setting-up stall at a range of locations around the university, to inform students of what we have been working on. Of course, this has all been strengthened through an increased online and social media presence (which will further be bolstered through a new website).

There is still a long way to go for us to truly enhance our visibility. We still receive messages asking us what the point of the student union is – a recent survey of students at our Wrexham campus reveals that our attempts to better engage with those students requires a lot more work. However, I am confident that, internally, we all now understand the importance of face-to-face interaction (Covid-19 means this almost feels like a redundant assertion to make) and that, as a result, more people understand the nature of our work. 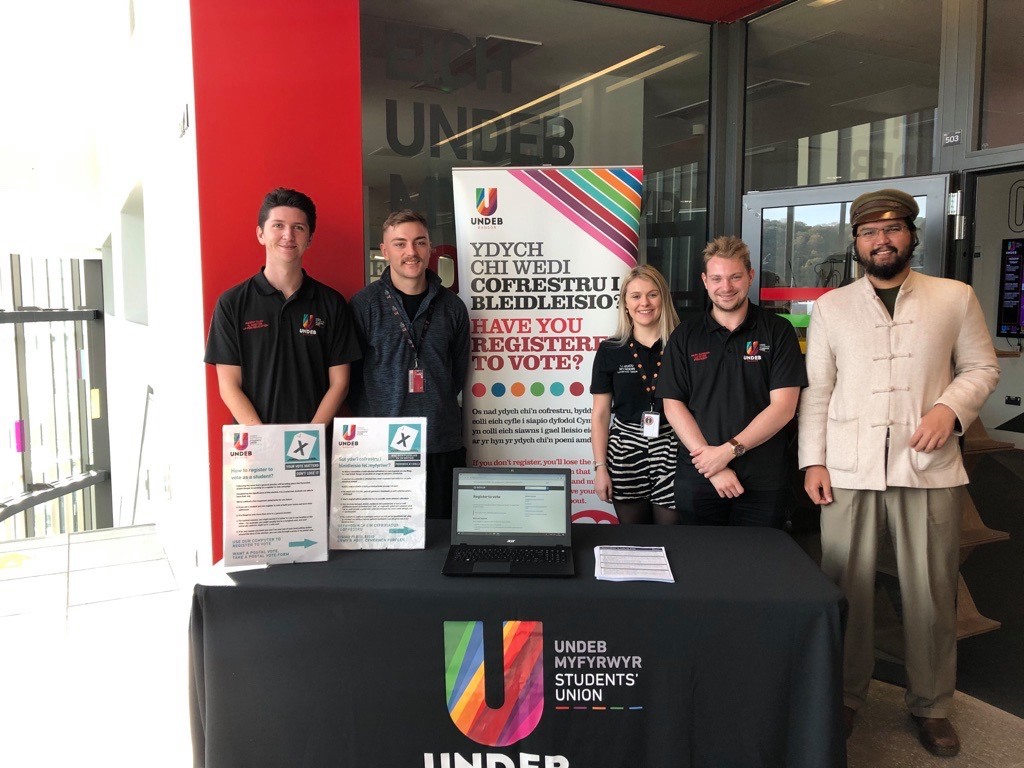 The value of listening

In many respects, it is difficult to argue how a Sabbatical Officer can do their job without this face-to-face interaction. We are used to all politicians telling us how they do all they can to listen to and be guided by ‘the people’ – anything else makes them look out of touch and elitist. The same applies for Sabbatical Officers, if they want to be respected by the students who elected them.

Far too often, Sabbatical Officers pretend to know exactly what students want them to be working on, without speaking to them about it. Of course, they often have a reasonable idea, as they have been students themselves, and all attempt to put together a manifesto that appeals to students as the electorate. However, one principle that I have always tried to stick with is that of listening and learning from students, to inform me of what is important to them. I did this right at the beginning, when putting together my manifesto for becoming Vice President for Education and have since been guided from conversations I’ve had with students, and from a wealth of survey data and feedback that Undeb Bangor possesses.

I believe that this value of listening to students makes the work of a Sabbatical Officer much more informed and meaningful. Throughout my time at Undeb Bangor I have led several campaigns and initiatives, which have attempted to go right to the heart of what students see as being important. Student accommodation and housing has been, unsurprisingly, one such example. The ‘Don’t Panic’ message that I created was directly linked to feedback I’d received from students, in relation to them feeling pressured into signing a private-sector contract without thoroughly looking to see what is available. The house reviewing platform that I’ve worked closely with, ‘Marks Out Of Tenancy’, was similarly one of my priorities after hearing students wishing they could look at reliable reviews prior to choosing where to live 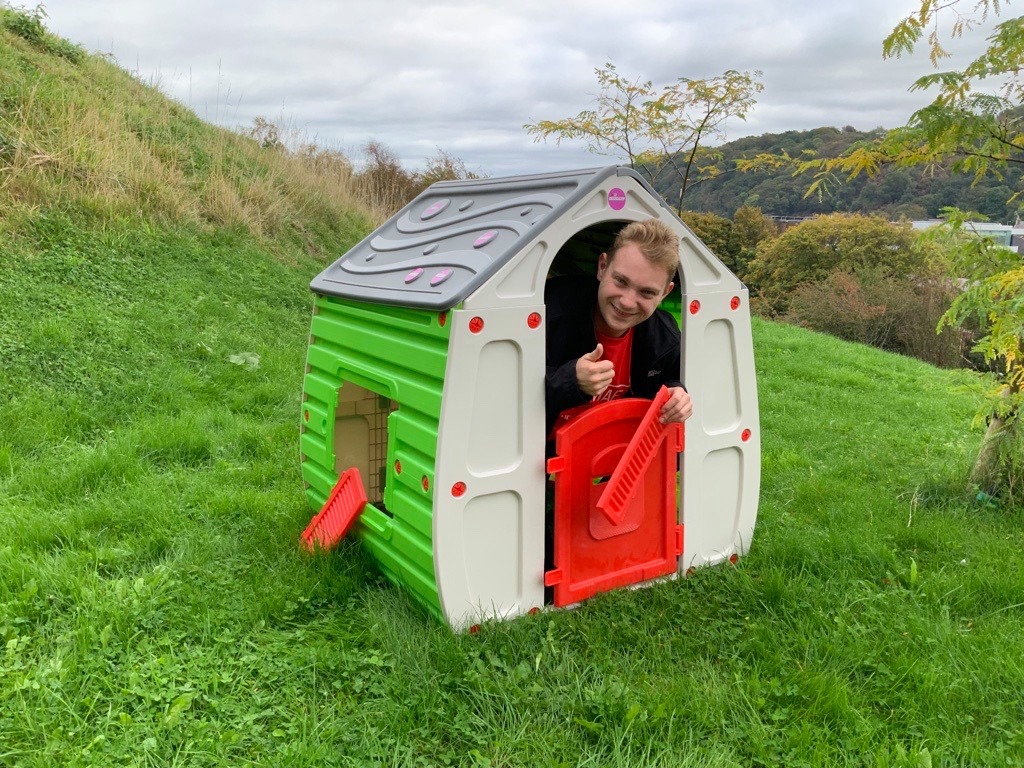 Another campaign I am proud of is ‘No Grey Area’, which was set-up to broadcast the university’s zero-tolerance approach to sexual harassment and violence. This, again, was established as a result of hearing, first-hand, just how much of a problem sexual violence is on all university campuses, including in Bangor.

I am proud of the campaigns I have led throughout my two years at Undeb Bangor. By listening and learning from students, I was confident that I was investing time and resources into campaigns that could make a real difference to them.

This blog could not be completed without turning to the Covid-19 situation, which completely transformed the final few months of my time at Undeb Bangor. It is still quite unbelievable to think of it happening. Lockdown suspended virtually all our activities and opportunities, with attention turning to how we could continue to adequately represent students throughout the crisis. This work is ongoing, with work now being focused around the university’s plans for the next academic year beginning this September.

However, it is far more interesting for me to link the Covid-19 situation to what I described at the beginning of this blog, in terms of Undeb Bangor being much more valued and respected than in previous years. This has clearly been the case, with the university seeking our opinion from the very beginning of the crisis: we had membership on the university’s Covid-19 steering group from the very start and have been consulted whenever a major decision has been made. This includes the move to working from home, and the release of the university’s set of ‘Force Majeure’ emergency regulations. One area of work where we have been particularly valued by the university has been the communication that has gone out to students. The university realise the importance of transparency and keeping students updated – linked to the release of the Business Cases for Change, 18 months ago.

As mentioned throughout this blog, I think Undeb Bangor is in a much stronger position than it was two years ago, and I feel privileged and honoured to have been a part of that journey. I’m not going to pretend everything is perfect, but I am confident in saying that we are valued and respected for the diverse range of work that we do, to a greater extent than used to be the case. I would say that this extends to university staff and students. I hope that my achievements, some of which are in this blog, have contributed towards that, but it is important to reiterate that it is a team effort. We have some fantastic staff members within the union, who are the backbone of the important work that we do.

On a personal level, I will be moving away from Bangor at the end of my tenure; I am starting a postgraduate course at the University of Cambridge this October. However, I will always look back on my time in Bangor, and specifically at Undeb Bangor, with a great sense of pride and gratitude. I have hugely developed as a person over that time, and put that down to the opportunities that have been available to me and the amount of support that I have received along the way.

I look forward to watching, with enormous affection, Undeb Bangor’s great work from afar. I will always be a supporter of Undeb Bangor and Bangor University, and will always have a special place for Bangor in my heart. 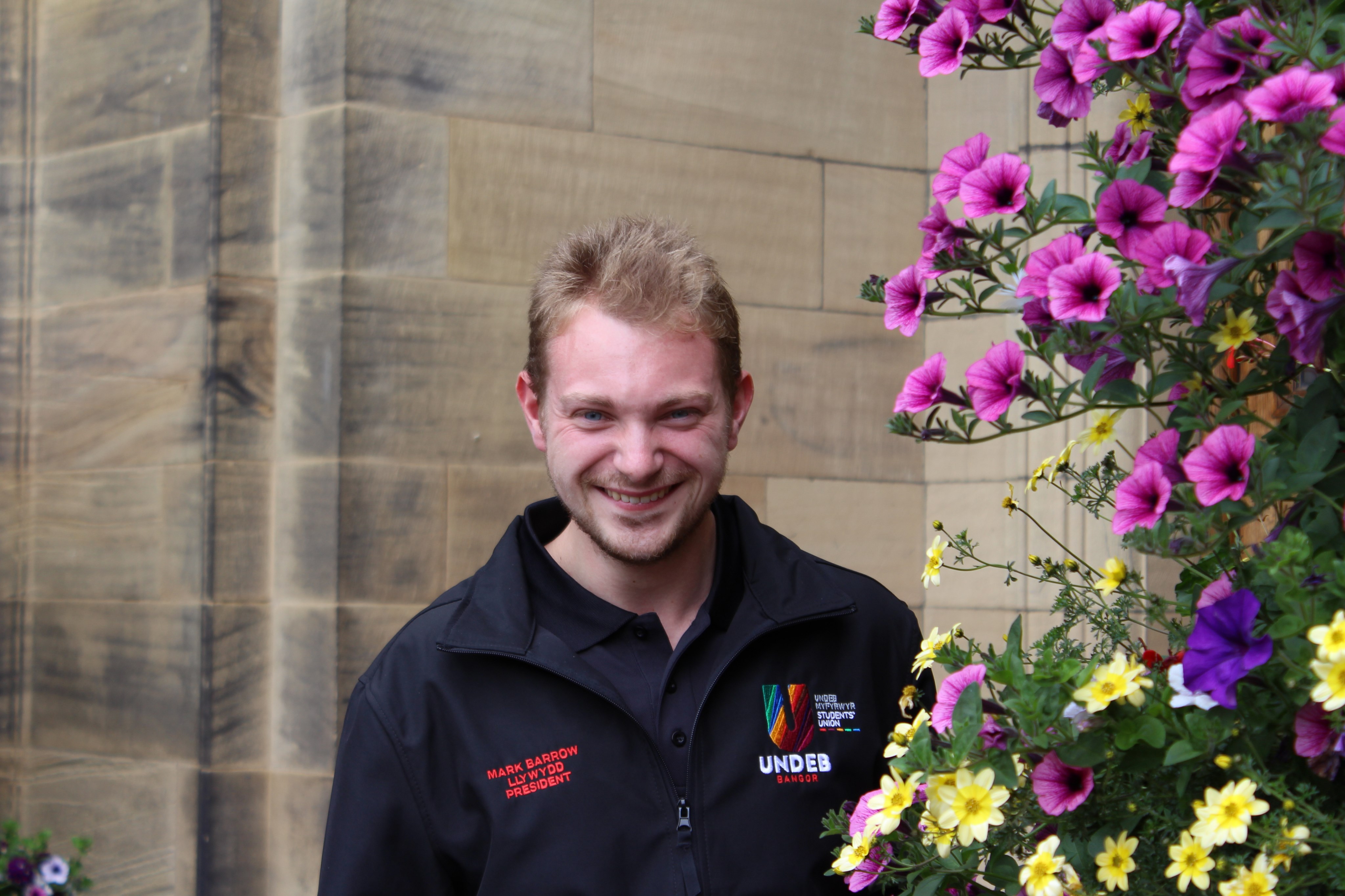