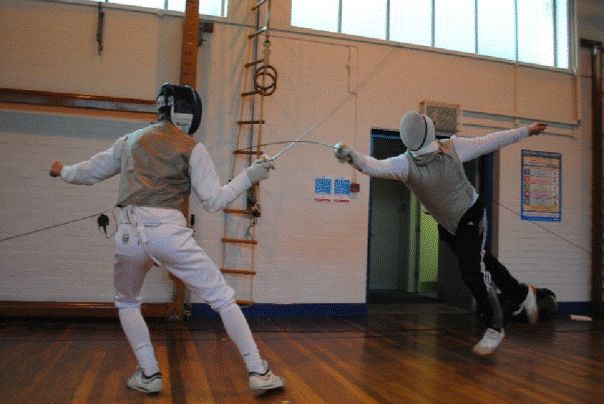 Have you found a damsel in distress on campus, but don’t know how to save her…or him? Do you want to settle who drank the last of the milk in style? Or perhaps you just have a thing for white straight-jackets or 36 inch blades?  Whatever your reason or even if you just want to see what all the fuss is about….THEN READ ON!!!

Over the past few years, Fencing as a combat sport has unfortunately suffered a dwindling amount of interest, particularly from the younger generation of today. Whether this is due to the niche reputation of the sport or the cost that most associate with participating, it is clearly a hindrance. This luckily could be set to change this year though with the excellent coverage, advertisement and commentary that the sport received during proceedings of the 2012 Olympic and Paralympic games over the summer. Young and old alike across the country appear to be showing more of an interest, and we intend to cater for that added interest in the 2012/13 academic year.

The BU Fencing Club has long been established to allow students and non-students alike a chance to test their metal against other seasoned fencers, or simply to try the sport again or for the first time against a variety of opponents without the added cost. Last year the club gained some excellent fencers, some complete beginners, and hope to expand even further over the coming year. To complement this they will be introducing more friendlies with other universities and more within-club tournaments, to allow new recruits to try out competition in a more relaxed environment.

Club membership is free for 2012/13, and members have access to a multitude of club kit, weapons, the qualified coach and fantastic socials. For those that wish to, there is a more competitive side and currently run two BUCS teams, a Men’s and a Women’s, which have done well in recent years being the Men’s Northern 2A Champions in 2010/11, Women’s Trophy Champions in 2009/10 and Women’s Team of the Year in 2008/09.

As well as this the club received AU Club of the Year in 2006/07, run intra-club inter-regionals each year and participate in the Welsh Universities Competition, of which we were the champions in 2008/09.

So whether you’re lightning with a sabre or can’t tell the difference between the pointy end and the pommel, come and have a stab! Beginners are more than welcome and meetings are at Normal Site Gym 1, directions to which can be found on the website, http://bangorstudents.com/​fencing/.

Sessions take place each week on Tues & Wed 8-10pm and Sat 1-4pm so when you’re tired of getting PISTE, don’t be FEINT, come meet in the FLECHE!!!  You can always come see the team in town, but you’ll have to be RAPIER quick to BEAT them to the bar!!!