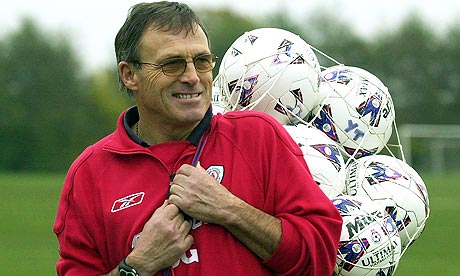 On the 10th November 2011 a footballing era came to an end, after 28 years with league two side Crewe Alexandra manager Dario Gradi stepped down to focus more on youth development. Few people amongst the football world won’t recognise the achievements of Dario and the calibre of player that has come through his ranks. In 2004 he was inducted into the English Football Hall of Fame being the 11th manager to be so, this achievement along with his MBE show how much impact Gradi has had during his managerial stint at Crewe.

Dario Gradi built Crewe Alexandra during his tenure and quite possibly did more for one club than any other man in football and yet his achievements are still widely overlooked by the lay-public. In the same week as Sir Alex Ferguson’s 25th year in charge, relatively obscure Dario Gradi stepped down with little publicity. Many say that had he made the step to the premier league his name and story would have been all over the back pages, but by showing commitment and devotion that is so often lacking in the modern game Dario just seemingly slipped away with little interest from the media.

Famous for his development of youth talent Dario Gradi has been accredited with launching the careers of some of Britain’s shining stars of the last 28 years. Current Sunderland and Wales midfielder David Vaughan was one of the players to make his name at the Alexandra stadium under the Gradi era as well as one time England international Dean Ashton and current Fulham captain Danny Murphy as well as a series of other talented players such as David Platt and Seth Johnson. Following his resignation, several of the players nurtured by Gradi took to the social media to show their support and offer their thanks to him, current centre half Jordan Connerton, tweeted “Thanks Dario for signing me from non league!”, whereas hot prospect Nick Powell added “Sad that a manager has stepped down after so long, poor way to leave with the boo’s and chants. Still the same players …” which shows the unfortunate way in which a footballing legend parted with the club. It was after a string of unfortunate displays and points dropped that saw the fans turn on their much loved manager.

The fans of the club will always remember the Gradi era, and several fan are calling for the Air Products Stand to be renamed the Dario Gradi stand, similar to what Manchester United did for their long serving gaffer Sir Alex Ferguson, due to Gradi’s 1997 achievement of taking the club into its highest ever league finish. Following the news the club announced that assistant Steve Davis has taken the reigns and will hopefully have a much brighter career at the club than Gudjon Thordarson, or Steve Holland did during Gradi’s time as technical director.

I for one as a fan of Crewe Alexandra will always remember Dario stood on the sidelines from when I was child, commanding the players during their most successful stint in the nPower Championship.