Trending
You are at:Home»Science»Environment»Establishing the world’s biggest marine reserve

Coral reefs are built by fascinating marine invertebrates that produce calcium carbonate and form many compact colonies in the shallow waters of tropical oceans. They are often called the ‘rainforests of the sea’ as they house a quarter of all known marine organisms covering less than 1% of the ocean’s area. Their formation requires specific circumstances (temperature, light) and they are essential for the functioning of a significant portion of the marine ecological cycle. Nevertheless, corals still remain a wonder of the ocean and require a lot of further research.

From an interview with John Turner, from the School of Ocean Sciences, who works on coral reefs in the Indian Ocean and Caribbean Sea, I learnt that coral reefs are facing major challenges and are now at risk from man’s activities and changing climate. Today, it’s exceptionally hard to find places with a relatively undamaged coral reef ecosystem and studying corals is becoming a race against time. Coral reefs face a serious threat of extinction, primarily because of ocean acidification and rising sea temperatures, and a combination of these factors could lead to huge biodiversity loss, but the real consequences are impossible to predict.

One of the rare cases of a virtually untouched coral reef ecosystem is the one in the Chagos Archipelago. It is a British Overseas Territory with a tiny (~60 km2) land that has almost never been populated by humans, hence preserved much of its natural characteristics. Due to the lack of human impact, the surrounding waters are some of the cleanest and the corals the healthiest on the planet; making Chagos an important reference site for what a coral reef should be.  Back in the 1970s, these corals were remote but perhaps not considered particularly special. Research by Warwick’s Prof. Charles Sheppard, began to reveal the pristine nature of these reefs as others close to areas of human settlement became degraded, and eventually the British Government declared the area a Strict Marine Reserve in 2010 – the World’s largest at 640,000 km2  – an area larger than France. John Turner first went out to Chagos in 2006 to explore the reefs, and now leads a research project to strengthen the Marine Protected Area through increasing knowledge about the system. “The British Government funded Darwin Initiative project provides for 3 expeditions over 3 years to this remote location to build up a picture of the coral reef ecosystem. This was the first time multiple expeditions could occur one after the other in a very tight succession and this has given us a real window into understanding these reefs”. “One of the main things we’ve looked at is how the coral reefs have changed in recent times due to the impacts of climate change in the absence of localized direct impacts from Man”. John Turner noted the significance of the research: “The Chagos is important because it can act as a reference point, like a control site, because there are no people there, so we can see how good coral reefs really function properly”. 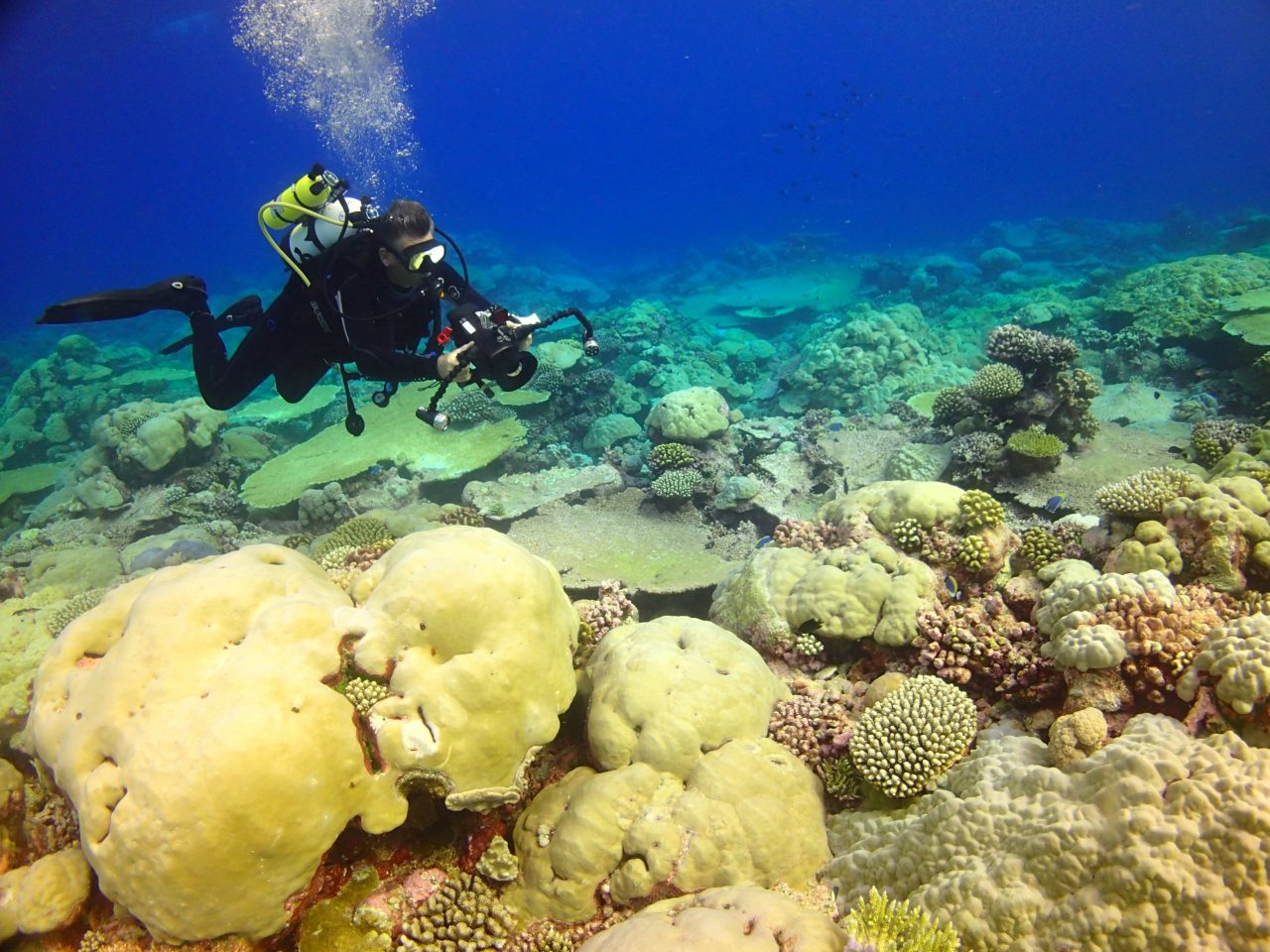 The series of expeditions have shown that Chagos’s corals are more resilient to climate change and more able to recover from bleaching than most other reefs close to human developments: “the data show that the corals can bounce back if they have not been weakened by impacts such as coastal development, agricultural runoff and overfishing.  “After the 1997-1998 coral bleaching event, the Chagos’s corals that were covering about 75% of the seabed were reduced to less than 20% cover, but gradually these corals have recovered, while lots of other coral reefs around the globe remain as rubble with few signs of recovery”.

Also, the project team have estimated that around 50,000 of Chagos’s blue sharks would have been unintentionally killed in the last 5 years had there been no MPA: “By protecting the water of the Chagos and not allowing vessels to fish in that area, we are protecting a lot of the organisms that get caught in the by-catch”. Moreover, some of its fish species were substantially larger than in other places in the Indian Ocean: “there are certain fish, such as Grouper that around Africa are quite small, they maybe reach 40-50 cm, you go to Chagos and they are over one meter in length. We also know that larger fish produce proportionally a lot more young, the ones that are 30-40 cm might produce 30,000 young, while a fish twice that size probably produces many millions”. The size and abundance can also be taken as an index of fish biomass: “Off of the East coast of Africa, or around Indian Ocean Islands such as Mauritius, the fish biomass is maybe 500-600 kg per hectare in fished waters and maybe 1200 kg / ha in the small protected areas, but in Chagos we are looking at about 7000 kg per hectare over a large area!’’

Large Marine Protected Areas in the right place are one of the ways in which we can study and conserve marine life, and these will ultimately benefit mankind because they should provide a refuge for many species and possibly a source to help replenish degraded areas. Networks of smaller protected areas and other tools such as catch limits and closed seasons are important to enhance fisheries and ensure revenue from tourism.  It is likely that rising sea temperatures and ocean acidification will kill many reefs, but we may be able to conserve the strongest by protecting them from localized impacts, to ensure the greatest resilience.