They will travel 50m (the same length as an olympic swimming pool) along the outside of the International Space Station hand-over-hand to replace a faulty component on the sequential shunt unit that has compromised a power channel. The failed electrical box regulates power from the solar panels. 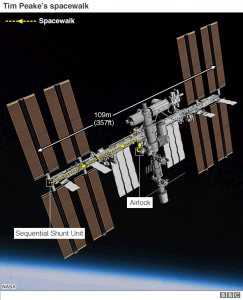