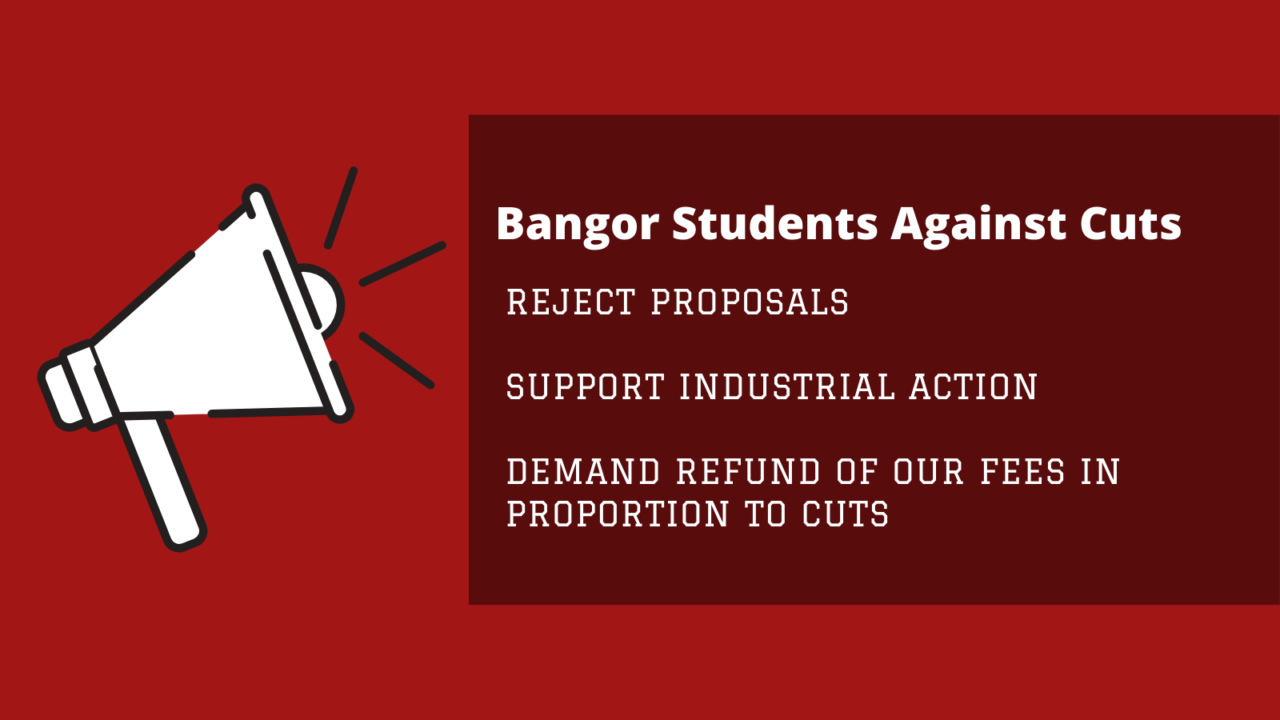 Bangor Students Against Cuts is a student-driven campaign opposing Bangor University’s plans to cut 200 jobs. Three student leaders from the group agreed to speak with Seren about their campaign.

Per the request of the interviewees, they will be referred to solely as spokespersons one, two, and three (SP1, SP2, SP3).

How did Bangor Students Against Cuts start?

SP1: We are three student reps from Bangor University who were absolutely appalled when we realised the implication of the 200 job cuts to services and teaching, particularly teaching. It started out as a departmental thing for two of us because we are both post-graduate students, and one of us is going to lose a supervisor if these cuts go ahead, and at this stage, with PhDs, that can’t happen. So that’s how it started, as a discussion between us, because we are both reps. And then [Spokesperson 3] who is also a rep from a different department, said “you know what? We should do it.”

And it evolved: what we should do as reps is disseminate the information that we have down to all the students. Not just us, not just our personal schools, but everyone – because it became obvious from the start that students didn’t know what was happening. So that’s how it all began – we researched what we had to do, we were given guidelines on what we had to do as reps, and we found that we were perfectly within the guidelines.

We started on Thursday morning, we compiled a petition, and the two tech wizards who are my colleagues sent out 10 and a half thousand emails. And by Thursday evening, we had over 500 votes [on our petition]. So, it just shows that when you work together, it can be done.

What are your specific concerns surrounding the current business cases as proposed by the University management?

SP1: The most outstanding concern, and the one that affects everybody in the University, would be the loss of tuition. If you have a module that is being taught that has, for example, three lecturers that cover that course, and [each]cover different aspects. If one of those lecturers goes, then at the point of delivery the tuition is going to be cut by a third. The quality is going to be diluted and the other two tutors, no matter how good they are, will have to absorb that third party. And that means that the students are not getting what they paid for. They’re not getting the all-round tuition experience. I think that was our major concern.

SP2: In addition to that, the professors can no longer do the research they do at an international level, and so it downgrades the quality of the education, and the prestige of the University.

SP3: To add to that, as well as having tuition affect all the students, there are professional services that are affecting all the students. We’re particularly having a mental health crisis with young students who are isolated and friendless inside their halls, who are very depressed and very vulnerable. And the fact that because of how overburdened the mental health services are, and the fact that the proposals are trying to make it even more burdensome for the mental health services to try and help everybody, whilst these cases are rising… it doesn’t make sense and it is dangerous. It’s not just our futures that are at stake, it’s our current lives as well.

SP1: And staff are just as susceptible to stress as students, if not more so in some cases. I personally know of one long-standing staff member, not in my department, who actually took sick leave and resigned due to stress, because she cannot stand the atmosphere and can’t cope with the stresses and the strains that have been placed upon her by not knowing whether or not she’ll have a job come Christmas.

What is your opinion on the UCU proposal to the University for lecturers to take pay cuts?

SP1: Well it’s not us taking the pay cut, I’ll make that quite clear, but I do know that this is an idea that has been rooted in more than one department, and this came from the staff themselves. Staff who are desperate to keep on teaching because that’s what they do. Because they don’t want to fail their students, and they have volunteered to take pay cuts in order to keep their jobs open; not for them, but for us, because they have a contract to teach us and they want to give us the best education experience that they can. Speaking personally, I think if I were in that situation, I would do the same thing.

Do you have faith in the current channels of representation for students? Namely, the Students’ Union?

SP1: We’re not a rebel break-away group, it’s just that as peer guides our role is to inform students of information, and to give them information on events that will affect them. We didn’t actually go to anyone for permission; we realised we didn’t have to do that. We are not receiving salaries from the University, as are the Sabbatical Officers. We do not have to report to a single department, although we did actually keep one of the senior tutors fully informed of what we did at all times.

SP2: That however was a one-way thing. They were not allowed to give out any information to us.

SP1: When our proposal for a vote of no confidence was voted down, we were disappointed, but we weren’t surprised. However, we decided this wasn’t going to stop our campaign. We will do what we can, and hope to get a lot more people on board, and hopefully work with the Students’ Union quite happily. But we realise that to a certain extent their hands are tied, and ours aren’t.

Have you been able to communicate with the Trade Unions?

SP3: We have communicated with the UCU. It’s been a bit difficult because I haven’t spoken to them since the beginning of the campaign. But the UCU, Unite, and Unison are able to communicate with each other about what’s going on, so I think most of the unions and workers who work within unions at the University are aware of our campaign, and know that we’re on their side.

SP2: We aren’t really allowed to communicate with the UCU because they are staff as well. We aren’t allowed to take any direction from staff because ours is a student-lead campaign.

SP1: But they have been very supportive. As have members of staff who have communicated privately with us that they are grateful for our support. Should it come to it, we will support any industrial action, and proportionate refunds.

What alternatives does the University have that you would be content with?

SP1: We are aware that we’re not privy to the financial information at the University. But for me it’s obvious. The first thing you would do is cut the deadwood from the top. You would thin out the executive – these people who are sitting there and do not relate to students. They’re not interested in students. They’re interested in money. And yes, if the staff are willing to take pay cuts to keep their teaching positions open, then yes, temporarily, that is a situation that can be looked at. But you don’t get rid of gangrene by cutting off an arm, you cut off a finger.

SP3: It’s also just recognising that they have reserves for a rainy day, and apparently this isn’t a rainy enough day for them – a global pandemic. I don’t know if they’re waiting for a nuclear apocalypse to start using these reserves or what.

SP2: If I just quote the business case, which is in the public domain, it says, ‘in order for the University to maintain its current levels of cash reserves…’ So that means that there is a reserve there and that those should be used.

SP1: I think as well, that they are using the COVID-19 pandemic as an excuse. This pandemic has been mismanaged. There was a relatively simple way through that: blended learning, online tuition. Students could have stayed at home. They could be taught online, as they are being taught online now, and their fees could be reduced. They would still be paying fees into the University, but the University wouldn’t have to pay for halls. There are lots of things they could have saved money on that way. In a corporate institution, that would have been put in place.

SP3: That’s the reason though. They need rent fees. The difference between a corporation like that is that they’re not reliant on rent fees.

SP1: But if students walk because they’re not getting the education they paid for, and if the University gets a reputation for not living up to its own reputation, students will go elsewhere. It’s a Catch-22 situation and I realise that, but they’re not helping themselves by being secretive and trying to push through measures at a rapid rate of knots without, in our opinion, due consideration for what it means, not only for the staff and support services, but for the students too.

No one knows how this pandemic is going to play out. We all knew that the first year, especially the coming winter, was going to be difficult. Until they get a handle on the pandemic – until there’s a vaccine like the flu vaccine, then it’s going to be very very difficult. But next year could be a completely different story. And why throw away what you have now? Next year you may need it.

I assume you are very aware of similar campaigns that appeared in 2019 with the closure of the Chemistry department. Do you find it demoralising to know their outcome? What does this campaign have that those didn’t?

SP2: There was a University in London that had exactly the same situation as us, with 200 proposed staff cuts, and they’ve managed to overturn that. Now, they didn’t have a student campaign with them. So on top of that, we have the UCU fighting for this, the Student Union fighting for this, and our campaign. So we’re looking towards that and hoping that we can emulate that.

SP3: With the Chemistry department situation, again, that was sprung upon the students. It was a backdoor, covert operation. The students were informed halfway through the academic year that the course was going to be deleted. I know students demonstrated outside the then-VC’s office. I know that he had to be escorted off the premises by security. I kind of wish they’d caught him, though that would have solved nothing. But it is demoralising to think that the University have learned nothing from that situation.

What single method or factor do you believe will be the most effective in forcing the University to change their plans for cuts?

SP1: Student power. Student voices. If students threaten to walk. If students say ‘ok, we want our money back, because we’re not getting what we paid for and you are not giving us what you promised us.’

SP2: We’re almost at 1000 votes. So that’s almost 10% of the University that is willing to walk out on this. That’s a huge financial loss.

The University have almost forgotten that the point of a university is to learn. The fact that they are focusing on cutting these courses as their main go-to just goes to show that having a university as a place to learn isn’t as important as having it as just a place where you can get a degree. A place where if you learn the bare minimum, that’s fine, as long as you get a degree.