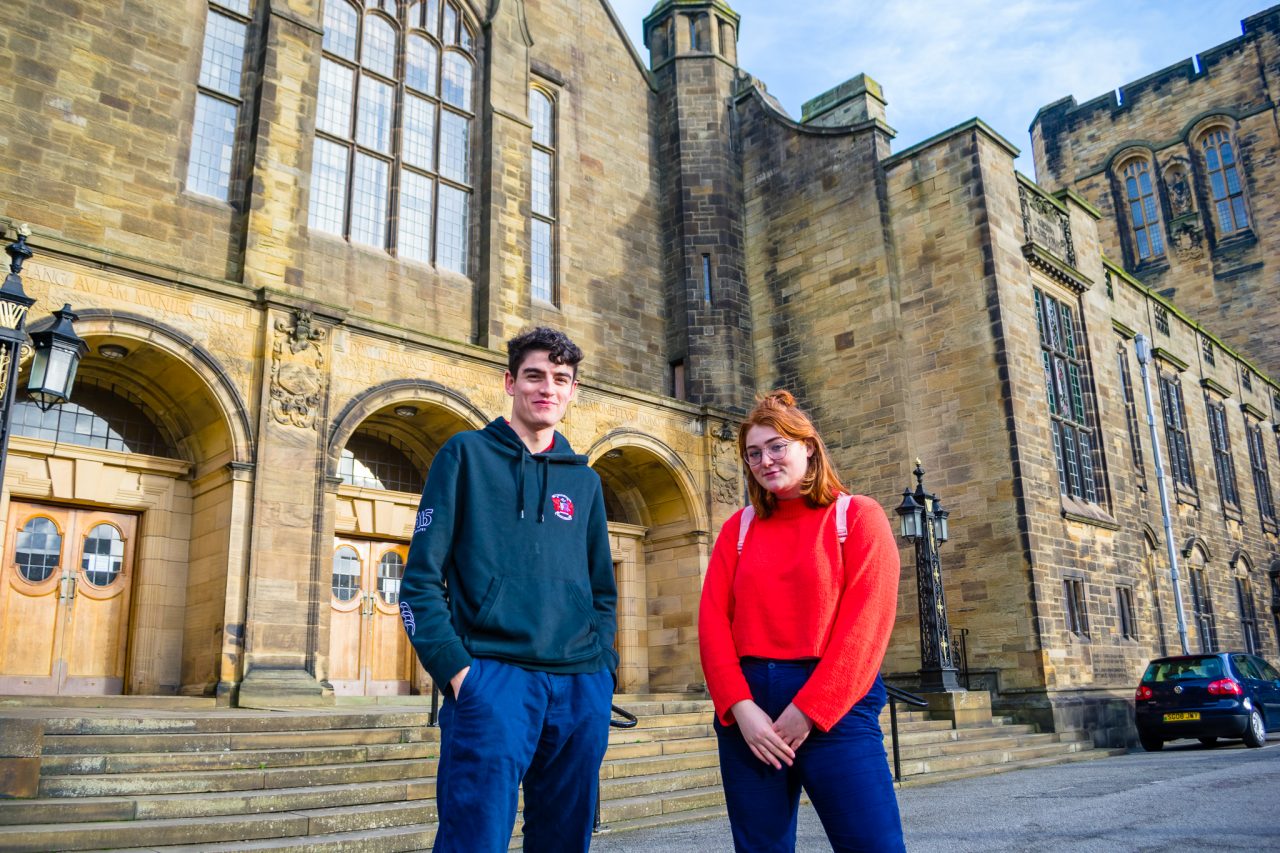 Students are set to stage a protest against Bangor University’s proposed cuts this Friday, 18th January.

The protest will take place in the Quad at Main Arts from 12PM and will feature talks from lecturers and students until around 2:30PM.

As it stands, over 1000 people are listed on the event on Facebook.

To build up to the event, Seren spoke to the organisers of the event, Owen J Hurcum and Kayleigh Lavornia.

The event has over 1000 people going or interested – how has it felt for you?

K: Surreal. A lot is riding on this. It’s a bit daunting as one of the organisers to know that we might not be able to sway the university’s stance on staff redundancies. But on the same token, it’s more than I ever could have asked for – to know so many feel as passionately about their lecturers as I do. I’m honoured to have been the one to organise them their platform, and to have been able to work alongside Owen. I hope those in attendance acknowledge the amount of planning and effort that went into this from our end. Regardless of what happens with the cuts moving forward, or the final attendance, we have more than proven that the student body is a force to be reckoned with.

O: It has felt great to know that so many students feel so strongly about this, with such a response I’m hopeful the University will have to listen to our combined voice.

What does this massive interest tell us about the current temperament of the student body?

K: Students are tired of passively accepting what direction their university is going in based on the assumptions of the few that have the authority to make final decisions. This Uni is nothing without the students that attend, and it is up to us to decide what assets within the university that we prioritise above others. For many, especially those who are attending the protest, they prioritise an exceptional education taught by qualified and passionate lecturers above anything else.

O: It shows exactly what students think of the University. Namely, they feel that the Gold standard service they are currently getting is worth fighting to keep. I don’t think every University could boast that its student body would be prepared to protest to keep their lecturers.

The consultation period has been extended until February 1st – is this a positive for you?

K: It shows that the university is attempting to listen to us. Their decision moving forward proves how well they’re listening.

O: It is very positive yes, it hopefully means the University are looking into more options – it also means they will be more likely to take into account the message of support for our staff that we send out during the protest.

Many events have unravelled over the past few months. From your perspective as the protest organisers – what has been your general take on it all?

K: People love scandal that’s interesting, and continues to reveal itself over time. This is exactly what’s happened here. We looked to answer a simple question: ‘why are we in this financial mess, and why did no one know about it until the situation was dire?’ Everyone wants to know what the answer to that is, and with each new breakthrough, we come closer.

O: I think the stories about the ex-VC have helped get more students into the politics of how the University is run. But, overall, the events that have unravelled seem to suggest that staff will be lost and chemistry scrapped. We hope this is not the case.

What is the main, take home message behind the protest?

K: The truth behind any situation will always find its way to the surface so long as you are willing to press for it. There are potentially more practical, less harmful plans of action for facing this deficit that are slowly coming to light within the academic community. If the university is not willing to come up with alternatives, relevant and qualified people will. There is a private accountant who has been hired by staff unions to analyse the financial situation of the university that will be revealing his findings on the day of the protest, and many believe that it will be telling.

O: The main thing that interested parties in the protest will take home is that the Bangor student body is a proud and active one that will fight tooth and nail to ensure the services we get from our University next year (and for future students) are at the same high level they have been for us so far during our University careers.

There are some who have made a criticism that the protest won’t achieve anything – what is your response?

K: Failing to protest wouldn’t achieve anything either. If you don’t agree with what we’re trying to do, sit this one out. But the only way there’s a chance that this protest will achieve something is if the student body shows unity and turns up. If you agree with our message, your efforts could make the difference. Nothing has ever been accomplished by sitting idly by. Contribute to causes you support, because you support them, rather than because the odds are in your favour.

O: Whilst I understand this, I do disagree. This action demonstrates the massive student support for our lecturers. The University has a consultation period to listen to student concerns, I don’t think there is any way to more acutely articulate the concerns of such a vast number of students. Equally, history is on our side. It was student protests in the 1970’s that changed the University’s Welsh Language policy, so why can’t we achieve just as successful results?

Realistically, what result do you hope to achieve from the protest?

K: Above all else, transparency. The university needs to know that, moving forward, communications on situations such as these need to be clear. We have seen an increase of transparency since beginning this protest, in the shape of business cases, focus groups within affected schools, quality journalism from Seren, and Q&As with relevant upper management. But the fact of the matter is, these things would not have happened if Owen and myself did not speak up, and that is not acceptable. The university’s response has been forced by our persistence, when these resources should have been available to begin with. Because this is a student issue; this affects ‘the student experience’ drastically. The university will not take actions that could potentially detriment the student experience without consulting the student body moving forward, so long as students keep holding their university accountable.

O: The University will be forced to listen to the student body in a way they wouldn’t have to if we only went through the official consultation channels. It is a great way to start a dialogue with the University where they are more likely to listen, just because of the sheer volume of students who are going to be making their voices heard. Realistically it could very well be a major step towards the cancelling of the currently proposed cuts, and I have every faith it will be.