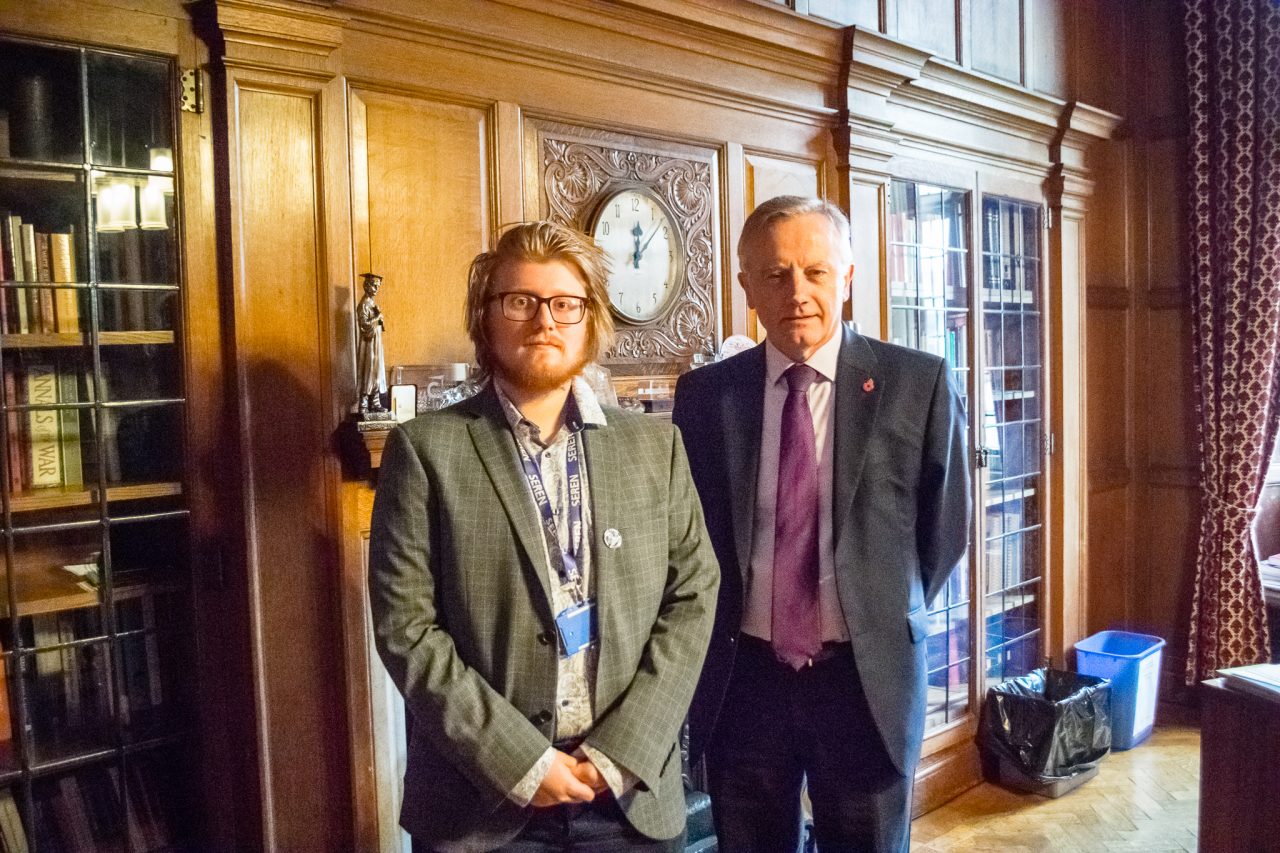 Amid a challenging financial climate for Bangor University, Seren went to interview Vice-Chancellor John G. Hughes to address various concerns echoed to us by staff and students.

Tell me what was in the letter you sent to Bangor University staff?

These are difficult times for the university sector as a whole. There’s multiple factors which are effecting many universities. There’s a demographic decline in the number of 18-20 year olds which is quite significant. We’re about to hit the bottom of that dip next year before it starts to climb again. This means there are fewer people going to university than there was four or five years ago.

A university’s main source of income is tuition fees. Bangor weathered the storm for a number of years, in fact we saw a large increase in students 2013/14. But in the last few years, the numbers have dipped. Not hugely, about 6% or 7% percent. If you couple that dip with the fact that there’s going to be empty beds in student halls, the accumulative effect of that meant we needed to cover costs of around £5m.

Now, we can cover £5m. Bangor University has a turnover of £150m. However, if we allow that to accumulate year after year then it gets to £10m and £15m. Essentially, our income has cut and so we’re trying to cut down on our costs.

We realize we’re in a difficult period – one of the most difficult periods that I’ve experienced in the university sector. What we’re doing is taking prudent steps to make sure we don’t get into a serious situation. There was a headline in The Times about three English universities being close to bankruptcy. An important point is that Bangor is nowhere near that. We have a relatively small problem, but it could become a big problem if we don’t deal with it.

One of the things we did was cut non-pay by 10% – money that departments spend on equipment and travel. That alone is a saving of £4m as our non-pay is around £40m a year.  And what we’ve said to heads of schools is that they are there to protect the student experience at all costs. Many of the student facing areas will be protected and have been protected for the last few years.

Reduce the number of staff. There’s 2100 members of staff in this university, we’re talking about downsizing by 50, so it’ll only be a tiny proportion of the staff. As far as we possibly can, we’ll do it by natural wastage – people retiring and won’t be replaced – or by voluntary redundancy.

Is it only the demographic change that has brought about more costs to the university?

It’s also the bigger universities taking more students, and being more aggressive about it. Therefore, getting into what would normally be our market. For instance, many universities around us have dropped their entry points.

Students that had firmly accepted Bangor were being contacted by other universities and being asked: “why don’t you come to our University instead?” We lost about 100 students because of that aggressive marketing behaviour. Strictly, that’s not supposed to happen.

And even among those 18-20 year olds that could come to Bangor, many people are choosing not to go to university because of the cost.

There’s also problems with pensions as well. From the strikes last year, the amount that employees and employers have to pay has increased also – that’s more money which we’ll have to find.

What have the university been doing to tackle the financial situation?

We’ve not been filling vacancies unless they are essential – such as student facing areas. We’ve been filling posts in marketing and international because they’re generating income for us.

Students don’t have to worry at all about the financial situation. We’re not in significant financial difficulties. We have a short term financial deficit that we have to deal with. Students shouldn’t see any of the effects of the cuts that we’re making.

Our cuts are relatively small. As I say, we have £150m turnover and a shortfall of £5m this year. Given the savings that we’re working to make, that £5m is being dealt with. But we have to be wary that the dip in students will continue. We’re asking heads of department to look at further savings to deal with the accumulative effect. This is what certain English universities didn’t deal with. Many of them thought their drop in numbers was a one-off, and would be recovered the following year. We don’t think that’s going to happen. So we’re being very prudent about the next 2 to 3 years to make sure Bangor doesn’t go into a significant deficit.

There’s a feeling amongst some staff that this letter could have come 3 or 4 years ago?

First of all, we have been saving this past 3 to 4 years. This is not the first time I’ve written to staff along these lines. This is not a one-off. During the financial stability process that we’ve been going through these past 3 years, there’s been numerous letters and other communications.

I gave a talk in June 2017, where 800 members of staff attended. I outlined the situation at that time, which was that we [Bangor] were in a position where we’d have to make savings. And I answered lots and lots of questions. So this was not a surprise to anybody.

Is there room for improvement in terms of transparency for students and staff to access information regarding Bangor University’s financial situation?

Yes, there is. And we will be sending out communications to students. However, there are formal procedures we have to follow. We have to bring any proposals for savings and cuts to the council of the university – who only meet every few months. We can’t make these proposals available to staff and students until the council have approved it.

But what I have been saying, and what I said in my letter, is that the scale of the problem is nowhere near the scale that other universities are having to face. Aberystwyth, for example, have lost a very significant proportion of its students over the last few years.

In your letter you haven’t ruled out compulsory redundancies – what moves will you make to ensure the quality of education isn’t compromised?

The instruction given to every Dean and every head of department is to protect the student experience at all costs. For example, we won’t be making academics redundant in this year. But we will be looking at downsizing certain areas that haven’t recruited well – we’ll try to do that through voluntary means or natural wastage. However, at this stage, we’re not sure or not whether we will have to make compulsory redundancies.

We are obliged by law to inform staff if we believe we may have to make people redundant. We have to issue an formal notification to the unions that there’s a possibility of compulsory redundancies. That’s the law – we have to do that. I didn’t put in those words in the letter to frighten people. I have to warn people that this could be the situation. We did exactly the same when we went through the financial sustainability process, but nobody was made compulsory redundant.

There are concerns about changes that have already been made. For example, school restructuring and the fact that some schools no longer have their own Student Administrator – what is your response?

Because we’ve merged schools together and created bigger schools in order to make savings, secretarial and administrative recourses have been pulled into a single office – what we’d call a hub. Students should still have somewhere to go. Additionally, we’ve made sure that Welsh speaking students can always find someone who speaks Welsh in these hubs. Once this all beds in, I don’t think there’ll be any significant loss of administrative support for staff or students. It’s simply a case of bringing schools together and making things more efficient.

You could have a situation where a fairly small school like Modern Languages has an administrator and then a big school like Business has a couple of administrators as well. Clearly, it’s not a cost effective way of running. So with schools that were co-located, we brought secretarial and support staff together into one hub.

How substantial are these savings from merging schools?

The savings have been quite substantial from merging schools. We now have cross-teaching between schools. For instance, we have lecturers from the School Of Welsh now teaching in the School Of English as they’re experts in certain types of Welsh poetry written in English. There’s good ideas coming forward as a result of the schools being brought together.

For example, a lot of our historians are political historians, so this could be introduced as a new interdisciplinary programme. There’s discussions about introducing new areas of science like bioinformatics which combines different schools.

We’re now coming forward with proposals for new courses which we believe will be very popular with current students.

What do you say to people who think there has been a hit to morale as a result of the discourse surrounding this letter?

There’s no doubt that morale around the whole university sector has been hit over the last few years. These are probably the most difficult times that I have experienced in university life – even worse than the Thatcher years of the late 1980’s when she cut university budgets.

I’ve been at four universities in my time, and I was the president of one in Ireland during the financial crash in 2008. I’d say this is worse. Not just for Bangor but right across the board, because there are so many pressures.

It’s quite remarkable and a great credit to staff that, despite pressures, Bangor has remained in the top 10 in the NSS for the last four years. That we’ve won numerous awards for accommodation, course and lectures, university of the year. And, of course, the first gold in Wales in the teaching excellence framework.

So there’s only so much I can do about morale in a difficult situation. A lot of it is external factors which I don’t have control over. But what is happening is that Bangor is dealing with it, so that we won’t ever get into a situation similar to some of the English universities.

What is your response to those who criticise your own personal life?

It’s inevitable in the position I’m in as the Vice-Chancellor. People are always going to criticise. It’s a difficult job at the top of such a big institution. I’m happy to address any specific criticisms that people might have. But I expect criticism. That’s what I have to take as part of the job.

How fervent is your commitment to Bangor University amid this challenging financial climate?

Bangor University is easily the most culturally rich university I’ve been at. Especially in terms of its love of Welsh culture. I’ve greatly enjoyed learning and immersing myself in the Welsh language in my time here.

Previously, I would have said that the comradery and morale within the university was always at a high level. But that has certainly suffered because of the difficulties that we’ve had. That’s a real pity. But I’m not sure if there’s really much I could have done about it as most of the pressures have come from outside of the university.

I’m totally committed. This university has been around for 134 years. It has made enormous contributions to life and culture in this region. I want to make sure it’s around for the next 134 years. That means I have to make difficult decisions and therefore open myself up to criticism. But that’s what I have to do in my position.