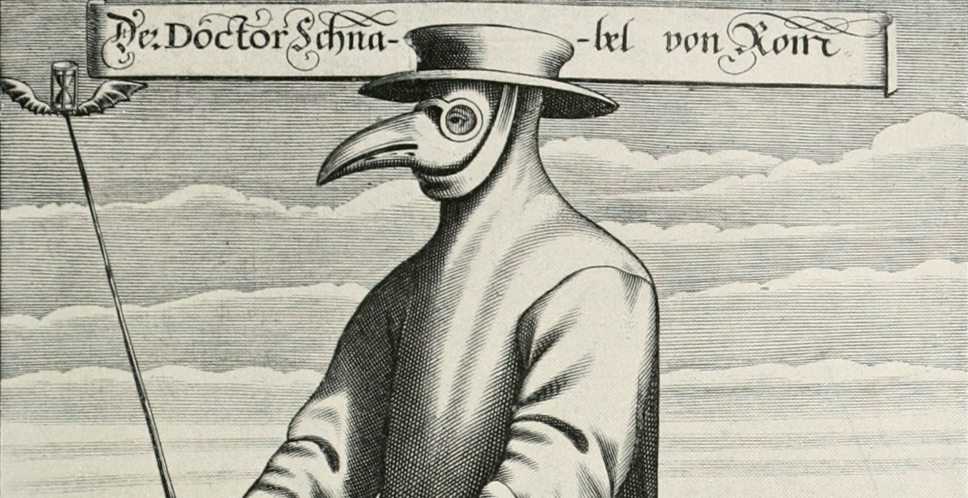 A Look to the Past: A Spooky Deep Dive into the Plague Doctor Costume

We are approaching Halloween during a global pandemic where people are advised to wear masks, so what could possibly be more topical than the iconic appearance of Plague Doctors? Now, most people are quite familiar with their striking and spooky appearance, but let´s take a look at what they did, some common misconceptions about them, and the history of the Plague Doctor costume!

The term “Plague doctor” refers to the physicians that treated victims of the Bubonic Plague (also known as ‘The Plague’, or ‘The Black Death’) during its multiple outbreaks throughout the 14th to 19th centuries. Often regarded as one of the most grim parts of human history, the Plague is estimated to have killed between 75 and 200 million people, with its peak being in the 1340s and 1350s.

Contrary to the mystique that has built up around plague doctors, most of them were not exactly the most accomplished in their fields. The positions were in large parts filled with rather unseasoned or unsuccessful physicians. Often young, these inexperienced doctors were only trying to establish themselves in their field. Some of them even lacked any medical training whatsoever, such as the “Empirics” in the Netherlands and France.

Myth 2: The main task of Plague doctors was to cure people of the Bubonic Plague.

Back in Medieval times, medical procedures were far from being as effective as they are today. While Plague doctors did treat patients, they could rarely cure them. Their main purpose was really to track the spread of the Plague throughout different demographics, which is where many of the public records of the pandemic come from. For this reason, they also at times performed autopsies. Additionally, some Plague doctors advised patients about their conduct before death.

When we think of Plague doctors, we probably all imagine them in their spooky reaper-like costume, usually consisting of waxed fabric overcoats, breeches connected to boots, tucked-in shirts, leather gloves, masks with glass eye openings, and most importantly, a beak-shaped nose (filled with various herbs, straw and spices). This ensemble, however, was not invented until 1630, when Charles de L´Orme introduced them in Naples. This means that in the centuries preceding and during the height of the Black Death pandemic, Plague doctors did not look at all how we or the media imagined them.

Myth 4: The beak and its contents actually protected the Plague doctors from the Plague

If only they did! While they certainly did put those aromatic items, like cloves, myrrh, mint, roses and juniper berries, into the masks to protect them, this was in hindsight not very effective at all! This is because the strategy was built on now outdated medical practices and theories.

So, considering that so much of what we know about Plague Doctors and why they looked like they did is not very historically accurate, why is it that the fascination with them lingers?

Well, the history of the Plague Doctor did not quite end when the Bubonic Plague became largely irrelevant. Over hundreds of years, the Plague Doctor has persevered in pop culture. This is partly due to the Plague Doctor Character in the “Commedia dell´arte”, an early form of Italian theatre. This version, with a white beak, is still one of the distinctive masks used in the Carnival of Venice. The character, however, has not stayed exclusive to theatre or Italy either, with a number of modern horror movies, like The Poughkeepsie Tapes, The Plague Doctor and the Sickhouse containing some version it. The look has also long been adopted by various subcultures, most notably by the Steampunk community, and has been turned into a relatively popular, and very unsettling, Halloween costume.

There is a number of lessons we can learn from the history and the myth of the Plague Doctor. Check your historical facts, there are a lot of misconceptions around; Mystery breeds intrigue; and, most importantly, if your fit is rad enough, no one will care if you´re practically useless.