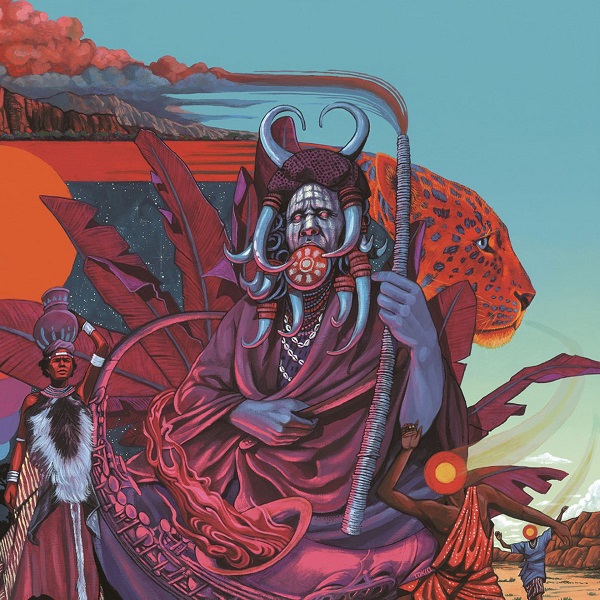 After nearly 40 years away from music, Idris Ackamoor and his band The Pyramids returned with 2011’s ‘Otherworldly’. Ackamoor’s band was an under-appreciated part of the 70s jazz avant-garde. Incorporating the rhythms of African music, spiritualism and more expansive harmonic ideas; they followed on from trailblazers in the 60s like John Coltrane and Pharoah Sanders. The result were albums like 1974’s ‘King of Kings’, a visceral yet transcendent piece of music, full of hypnotic grooves and raw, dissonant melodies. Now on their 4th album since returning, ‘Shaman!’ is certainly a smoother affair than their 70s work. The production is both modern and glossy in a way that the noticeably rougher ‘King of Kings’ isn’t. Despite this slightly more compromising production style, the music retains its otherworldly quality. The opener and title track begins with a spoken word piece by Ackamoor accompanied by a wandering flute line, before breaking into the relentlessly rhythmic  guitar and raunchy saxophone common to the band. Ackamoor’s saxophone playing largely sits closer to the smoother style of an album like Pharoah Sanders’ ‘Karma’, and allied with the mellow flute and violin soloists, generally sits on the more conservative side of spiritual jazz.

There is however a notable exception in the jarring ‘Theme for Cecil’. An ode to the notoriously manic free jazz pianist Cecil Taylor, the song’s sax solos are filled with violent squawks and odd melodies, a jarring but frenetic sound. Perhaps paradoxically the song opens with an almost reggae-esque bassline and spacey guitar chords. It serves, along with the title track, as the clearest line back to their early work. More generally the album certainly diverges in places from that 70s jazz sound into new territory. There are songs which almost recall the slow, metronomic grooves and trance-like backing vocals of Funkadelic and others the hazy guitar-work of psychedelia. Its variety is largely to its credit, but its general length and some of the tracks do bring the album down overall. Sitting at just under 80 minutes, it does drag at points. In addition, songs like ‘The Last Slave Ship’ or ‘Eternity’ offer little that other tracks don’t. Particularly in the case of the former, they also stick to a melody that isn’t particularly compelling for far too long. With a bit of a more selective edit, this album would be one of the more impressive jazz albums of the year. It has a sense of genuine emotion and manages to introduce the experimental tendencies of an incredibly fruitful period for jazz into a modern context. It also sits as an impressive symbol of a band that has outlived most of its contemporaries and still produces impressive music years on.