The cast of Culture My Arts
Arts & Culture

Click here to listen to Episode 1 of Culture My Arts

Culture My Arts is a newly premiered podcast designed to spoof discourse around arts and culture. The satire project consists of a team of Bangor graduates led by originator Finnian Shardlow, who first began developing the idea in 2017. The team agreed to talk to Seren about their project.

What is Culture My Arts?

Culture My Arts is a podcast, audio drama and radio show all rolled into one. Which means it’s super interesting to listen to, but extremely hard to explain.

In a nutshell, it’s a fully scripted satirical podcast which spoofs the sound of a live radio news show about arts & culture. Accordingly, we mostly take the mickey out of TV, film, music, literature, current affairs & much more. However, be warned… the world of Culture My Arts can be absurd, grotesque and distorted.

I’d like to start with a bit about you; you’ve all studied at Bangor – can you expand on what subjects and how you knew each other?

It’s a mad network of people from different circles who have linked up in various versions of Culture My Arts. A good chunk of us met in the School Of Music & Media. However, lots of us have crossed paths through a mixture of Seren, BEDS, Storm FM, living with each other and being extremely drunk in social situations.

For our two BBC shows, we swapped in Lewis Hall after our boy Al Lea moved back to Abu Dhabi.

So, it’s a big cast and crew of 15 cracking individuals, who, most importantly, all enjoy making funnies with each other. 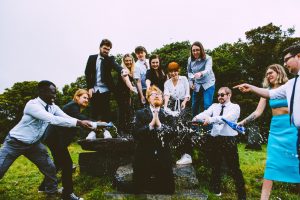 How was ‘Culture My Arts’ founded?

Culture My Arts was originally Finn’s third-year dissertation project. Most original cast members remain a part of the project today.

In 2018, two episodes were commissioned for BBC Radio Stoke as part of their ‘Wildcard’ initiative, which sought to highlight local talent.

In that time, it was clear that the concept was versatile and adaptable. There was definitely more material there to be unearthed. And so, since 2018, the idea of a series has been knocking about but was only put into practice this year.

Why did you choose a podcast as your medium?

Multiple reasons. It has immediacy and intimacy. Finn only started writing it 6 months ago and now it’s being edited and about to be released in November. It’s about 3 hours of material – a film of the same length would take years to turn around.

Blindness is another key advantage of audio which lends itself well to satire. It allows you to craft the most insane situations that would be impossible to create visually. It’s the same principle as South Park using animation. I mean, if South Park was done in a live-action film, it would just be disgusting. That removal from real-life imagery can make the flagrant aspects of satire a tad more palatable.

What is ‘Culture My Arts’ about?

There’s no real story as such. It’s more a sketch show dressed up as a radio show. However, that doesn’t mean the universe of Culture My Arts isn’t detailed.

In terms of what it’s about, the satire of Culture My Arts is about undermining the media’s pseudo-authority and taking a sardonic swipe at crap content and elitist snobbery. We parody an array of topics within arts & culture. Sometimes lovingly. Sometimes critically. But always funnily. The world can be a depressing place rife with injustice and stupidity. Culture My Arts uses laughter as a tool to ridicule it, and, just maybe… change it.

How did you get featured on the BBC?

It was for BBC Radio Stoke’s ‘Wildcard’ initiative which was highlighting local talent. Finn knew someone who worked at the station around the time, not thinking anything would really come of it. As it happened, we had two episodes commissioned.

For some odd reason, the BBC cut the word ‘anus’ from one line. But left in another line where a character asserts he’s much healthier after swapping alcohol for ecstasy. Nevertheless, all the cast were ever grateful for the opportunity to put such ludicrousness on the actual radio. It was a real, albeit absurd, moment of pride. Shout out to Lillie-Mae, without whom it wouldn’t have even happened.

What’s it like running this independently? And during a pandemic?

I think because we’re coming from nothing anyway, there’s no real point of comparison. We were paid peanuts for the BBC shows. So, we’ve never had a taste of ‘the big time’. We’ve scrambled together kit through our jobs and what each other already had.

Then, came the other challenge of getting everyone together at the same time to record. Of course, with the pandemic, it’s been difficult. But we made our recording process as Covid compliant as possible.

Above all, it’s been really exciting to engage with people and get some hype going. If anything, it means that 2020 won’t be such a write off for us!

Do you find it hard to write comedy?

Satire is tricky because it’s not just clowning without purpose. There must be a moral through-line to the comedy. There must be a point. It’s got to poke, provoke and critique. You also have to decide whether the satire is balanced and whether the point you’re making is worth the more polemic humour.

I did my Master’s on satire. I’ve read so much about it. For me, it’s just the most interesting form of writing because so many literary elements have to mingle together. It’s also mad that taking the mickey is an art form which dates all the way back to Ancient Greece.

What do you think about Rishi Sunak’s recent comments on the arts industry?

Everyone has lots of expletives for him. Guy’s a div.

The arts are intrinsically linked to the health of multiple industries outside of the arts. The notion that arts & culture is any less valuable is laughable.

I don’t know who Rishi knows in the arts, but exclusive arts careers are occupied by a privileged few. Most people in arts & culture work in other industries in order to fund their creative passions. Culture My Arts is absolutely included. We all have completely non-related jobs in order to live. Right now our Patreon funds go straight into running the podcast, not to us. 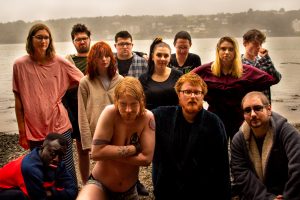 What’s the next step for your podcast?

Wherever it takes us. Head to www.patreon.com/culturemyarts to support the journey. Right now, we just want to break even and then we can think about how far we can take CMA.

For more information on Culture My Arts, check out their links below: