The hashtags #artiswork, #lowskilled, and #savethearts have been circulating around social media recently, along with an outcry at the injustice of jobs within the creative industry being called “low skilled” and “un-viable” by government officials.

Despite the arts and culture industry contributing £111.7 billion to the UK economy in 2018 (the equivalent of £306 million per day according to gov.co.uk), members of the government such as Chancellor Rishi Sunak have spoken out calling for artists to “retrain” for more “essential jobs”.

This controversial statement was made following struggles in the arts industry as a result of COVID-19. Plaid Cymru warned that the art industry in Wales is close to being “decimated” without more support from the Welsh Government.

The Wales Freelance taskforce published a report on theatre and performance freelancers, finding that 90% of them had lost up to £20,000 of earnings, 47% received no financial support from the Government’s SEISS scheme, 27% do not have sufficient income to live on and 79% said that their well-being was negatively affected due to COVID-19. 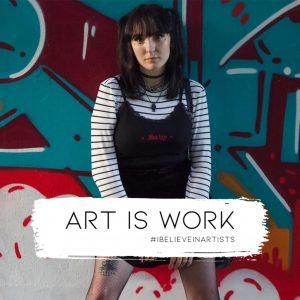 22-year-old director and actress Georgie Kerssenbrock spoke to Seren about these figures, stating: “Knowing that the government has the means to help our industry but instead chooses to ask us to ‘retrain’ shows just how they really feel about the arts industry.”

DJ Will Llywelyn also spoke to Seren about the importance of the arts, saying, “If COVID has taught us anything, it’s that we need the arts. They’ve been the sole avenues of escapism for many people throughout this pandemic. That speaks volumes for how important they really are.”

The government has been met with heavy criticism of not only their comments on the art industry being “unskilled,” but also for the lack of support given to the pandemic-stricken industry.

Plaid Cymru Shadow Minister for Culture, Siân Gwenllian MS said, “The impending decimation of the Welsh arts industry from this pandemic will have a grave and far-reaching impact.

“In one simple move thousands of jobs – which, up until now, had been saved through furlough – have been re-categorised as ‘unviable.’

On November 1st, 2020, the UK job support scheme will come into force but is unlikely to save many arts, live music venues, and cultural attractions from closing. It is also unable to save art workers’ careers, even though they were viable prior to COVID-19.

To add insult to injury, during lockdown everyone was stuck at home with nothing to do but be creative or digest creativity such as television, literature and music.

DJ Llywelyn stated, “without being too dramatic, I feel like the arts have proven themselves to be the only way in which I can both stabilise myself financially whilst fulfilling myself personally– be it writing or DJing – losing them would be like losing my purpose.”

Kerssenbrock also commented on this saying, “it’s incredibly disheartening to see the UK government’s response to the arts in regards to the COVID-19 pandemic. Suggesting that jobs within the creative and entertainment sector are ‘low skilled’ and ‘un-viable’ is a disservice to an industry, which is an integral part of everyone’s lives.”

“I ask anyone who believes the arts aren’t viable to live without the entertainment they consume on a daily basis. Turn off your TV and streaming services, stop listening to music, get rid of your books and don’t even think about going to the theatre. See how you feel then.”